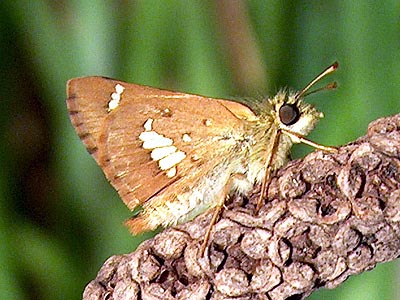 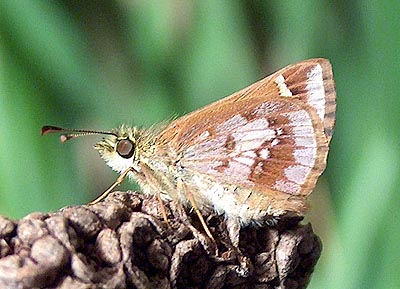 The sexes have dissimilar wing patterns. Males are distinguished by the obvious white bar on each hindwing beneath, and by a yellowish white hook-shaped marking in each forewing. Males also have a narrow silvery sex-brand that occurs transversely across each forewing above. This skipper seems to spend most of its time feeding at low herby flowers, where it buzzes about from flower to flower like a bee, only briefly stopping at each flower and seeming to have an insatiable appetite for nectar. It is irresistibly attracted to the cluster flowers of purple Scabiosa and yellow dandelion growing along the edges of forests and pine plantations, where it sometimes occurs in large numbers. On warm sunny days it will continue to feed very late into the afternoon. Males will also use this feeding period to court females. Fertilised females initially signal their status by rapidly vibrating their wings, but if the male continues his advance she will fly off high into the air with the male in tow, closely circling her, but eventually he will lose interest and return to the flowers as she disappears somewhere else.

In captivity in South Australia, larvae prefer Microlaena stipoides, but will also develop on *Brachypodium distachyon (false brome) and sometimes on *Ehrharta erecta. Young larvae will eat the soft new growth of *Pennisetum clandestinum (kikuyu), but ultimately this grass is toxic to the larvae. However, mature larvae can tolerate kikuyu for a short period. Surprisingly, considering how common the adults are in the wild, the larvae are extremely fussy eaters in captivity, requiring exacting conditions and hostplant, such as high humidity and the hostplant to remain in a green condition.

Small, initially white or pale yellow, hemi-spherical (domal) with well developed vertical ribs numbering from 12-14, and additional finer cross latticing around the base. Usually laid singly on the hostplant or on ground vegetal-debris next to the hostplant, also sometimes laid in pairs or in short rows. The female sometimes leaves abdominal hairs on the eggs, presumably for camouflage.If the egg is fertile, then after a couple of days it acquires a purplish red dorsal spot and a jagged purplish-red lateral band. Larval development within the egg commences immediately after being laid, and the larva is ready to emerge in about 13 days. However, the larva will not emerge until it is wetted by autumn rain, usually combined with a seasonal drop in air temperatures. They will sometimes eat out the top of the egg, and then just sit inside the egg with their black head blocking the opening, waiting for the rain to come. In captivity the larvae can remain alive inside the egg in a diapause (torpid) condition until early June. The egg shell is eaten by the larva after it emerges. The larva then moves off to find suitable hostplant, testing all likely grass by taking a small nibble out of the leaf edge. When it finds a suitable hostplant, it will move to near the end of the leaf and make a small tubular shelter within which to hide, usually by foldingthe leaf-end over, but sometimes by rolling the side edges of the leaf, and binding the edges together with silk. In the case of the latter shelters the opening facing towards the base of the hostplant is eventually sealed with a plug of silk, leaving a single opening facing towards the end of the leaf.

The first instar is long cylindrical and initially yellowor yellowish white, with a large black circular head that is smooth and shiny, the upper front part weakly grooved longitudinally. There are a few short hairs on both the body and head, that are slightly longer at the posterior end. The neck (prothoracic plate) is dark wine red coloured. After eating the hostplant, the larvae gradually become greenish. The second instar is similar to the late first instar but has a distinct, broad white longitudinal dorsal band split by a central narrow green dorsal line, and there is a further narrow white subdorsal line. The posterior end is brownish. The third instar is similar to the second instar but differs by having a brown, rugose head and the prothoracic plate is brown. New shelters are periodically constructed to fit the growing larvae. The early instar larvae feed at night by eating the leaf edges below the shelter, and leaving the central mid-rib of the leaf. Eventually the shelter is suspended by only the wiry remains of the mid-rib vein.

The fourth instar is similar to the final instar. At this stage the larvae have usually outgrown the width of the hostplant leaves, and if the leaves are not wide enough (as is the case of most of the host grasses) then the larvae will cease to make shelters from the leaves of the host grass and start to use loose, rolled leaf and bark debris as shelters, either caught up within the host grass or lying loose on the ground around the base of the grass. Once selected the leaf or bark shelter is lined with white silk, with one end sealed off with strong strands of silk, and the shelter is secured to an adjacent object also with strong strands of silk. Enough silk is used so the shelter retains its shape during dry and wet spells of weather. The shelters are not always occupied by the same larva and may be shared around with other larvae, presumably based on the principle of 'first in first served' after a hard nights feeding. Larval feeding is during the night, and there is slow growth during the winter months but there is flourishing eating activity during the warmer spring months and most larvae reach the final fifth instar stage by mid spring.

The fifth and final instar is fat and humped, typical of the Trapezitini Tribe, about 18-20 mm long, initially green with an indistinct pale, broad dorsal band and a darker central dorsal line,and a distinct narrow white subdorsal line. The lateral parts are pale while the posterior end is brownish. The neck area (prothoracic plate) is similar to the body colour. The head is large, oval shaped from the front, rugose, centrally grooved longitudinally, strongly notched at the top, mostly dark brown-black coloured but with a diffuse pale brown line either side of the central groove in the upper part, a large pale brown inverted V mark in the front lower part, some additional diffuse pale brown markings in the large frontal areas either side of the central groove but which do not reach the basal part of the head. The head is covered with very short forward directed, curved setae. The head pattern markings are distinctive for the species and differ from S. flammeata by being generally much darker. The lateral edge of the larva is strongly flanged. The body is without long hairs, but is covered with numerous white, elongated wine-glass shaped secondary setae set on simple smooth, raised bases, that are further set in a small white circular area that impart a white dotted appearance to the larvae. These setae impart a rough scabrous appearance. When fully grown and during the pre-pupa stage the larva turns brownish.

The final instar larvae continue to eat and grow strongly into early December but then slow or cease to eat and become quiescent. By the latter half of December pupation starts to occur among the larvae and these larvae then pupate at various times and some may not pupate until late summer or early autumn. These later larvae may periodically feed to keep up their energy levels. The larvae select shelters having a very tight fit.

Short cylindrical, typical of the Trapezitini Tribe, about 12-15 mm long, brown, but darker brown anteriorly and posteriorly, and (like a close relative Anisynta cynone) is copiously covered all over with a white water repellent powdery bloom (probably also with anti fungal-bactericide properties) that is very easily dislodged by any wriggly movements by the live pupa, producing an irregular pattern of brown under-markings. The thorax of the pupa is humped dorsally. The head is weakly flattened anteriorly, with the head cap (operculum) being dark brown coloured. The front (anterior) part of the operculum, and again laterally behind the eyes, is weakly sclerotised (finely rugose) with short, fine simple brown hairs. The central front part is weakly furrowed longitudinally. There are three pairs of black spots without bloom on the head area, two of the pairs occur in-line dorsally across the junction of the head with the thorax, a third smaller pair occurs ventro-anteriorly on the front of the head. A large fourth pair of head spots of dark brown colour, sometimes occurs anteriorly between the eyes. There are sparse, forward directed, short simple setae (hairs) over most of the pupa (excepting the wing areas), that become bristly, very common and posteriorly directed on the abdomen. The posterior end tapers to a large fan-shaped cremaster, which is dark brown coloured, flat, expanding similar to the paired flukes of a whale or dugong tail. The dorsal area of the cremaster is centrally furrowed and has a series of very fine elongate ridges or striations, and long cremaster hooks emanate from the ventral posterior edge. On each side of the cremaster is a short thorn-like smooth spine. The shape of the cremaster is diagnostic for the species.

Pupation occurs in the final larval shelter after one end of the shelter is sealed with a white web of silk. The shelter opening at the head-end of the pre-pupa is usually left open, although sometimes it is partially blocked by some strong strands of silk, probably to prevent other larvae from trying to enter the shelter. The pupa is secured within the silk lined shelter by the very strong, cremaster hooks. In captivity in Adelaide the pupal duration varies from 15-20 days during early summer, but is likely to be longer in the cooler Southeast Region and the longest period reported is 25 days. The empty pupal case remains inside the shelter after the adult skipper emerges, and is brown coloured.

The main flight is from early January to mid March, with the odd skipper occurring into early April. Only one brood a year.

In South Australia it is presently confined to the Lower Southeast Region in areas with annual rainfall above about 600 mm. The skipper is also found in the higher rainfall areas along the coast and Great Dividing Range in Victoria and extending to as far north as southern Queensland.

The skipper usually occurs in moist grasslands and open forest with a grassy understorey, growing in cool temperate areas. The early stages of the skipper require continuous humid conditions.

Local in its distribution. Sometimes locally common during peak periods of emergence.

The main threat is from toxic spray drift due to the farming and forestry practice of aerial application of insecticidal sprays.

Suitable habitat is reasonably common. Applications of toxic sprays, particularly by aerial means, in farming and forestry areas should be judiciously applied. 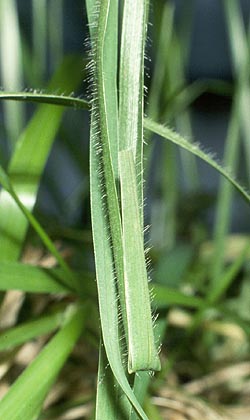 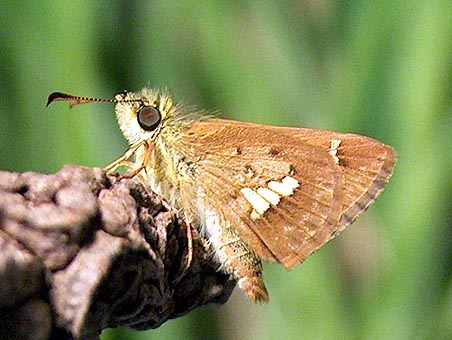 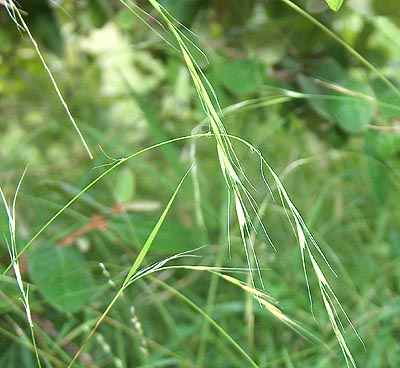 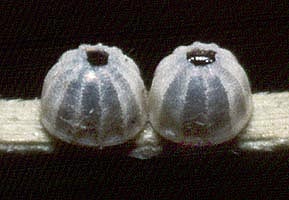 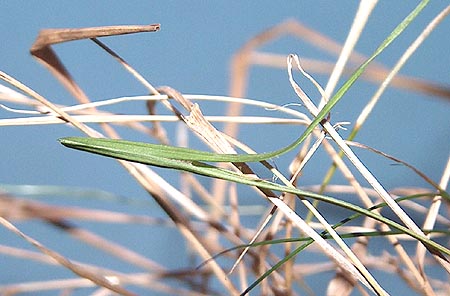