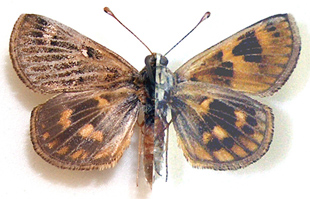 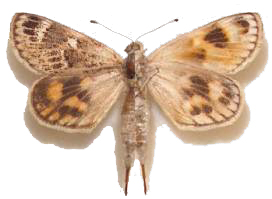 This is a large, iconic sun-moth that once used to occur on the Adelaide Plains and Barossa Valley, (and there is one historic record from near Renmark). It has a wing expanse of about 35-52 mm. The moth was once locally common in the Two Wells area, but has not been recorded in SA since 1948. It is now regarded as critically endangered in SA (if not already extinct). The moth (including Victorian specimens) has mainly been recorded flying during February and early March. In the Two Wells area it was most prolific during the first week of March.

The forewings are some shade of brown colour above, cryptically streaked with white. The hindwings are also brown but are marked with large, dull orange spots. The intensity of the brown differs among individuals such that they can occur in dark and pale forms. In SA both male and female moths have occurred together, whereas in northwest Victoria the same or similar moths are parthenogenetic and only females occur! (A situation that also occurs in worker bees.) This probably reinforces the knowledge that there is very little dispersal of sun-moths away from their habitat areas, particularly those species without a functional proboscis, which this moth does not possess. This moth only lives for 3-5 days, briefly living off its store of body fat acquired during its early stages.

The moth flies in open woodland-native grassland habitat comprising a high proportion of the grass Rytidosperma setacea (Poaceae). Present day parthenogenetic moth colonies prefer small host tussocks that are lightly grazed or mown, and are in active green growth, a similar requirement to S. theresa. Like S. jcaria, this moth can tolerate flying in extreme conditions and heat of 40°C, although under such conditions they usually settle on grass stems in a vertical position to minimise sun contact. Its early stages are unknown from SA, but in northwest Victoria the primary hostplant is believed to be Rytidosperma setacea (Bristly Wallaby-grass). Rytidosperma caespitosa (Common Wallaby-grass) is also usually a minor component of the habitat, and pupal exuviae have been recorded in close proximity to Austrostipa scabra (Rough Spear-grass) (Poaceae).

Interestingly, Victorian females lay eggs in small cracks in the ground proximal to the hostplants, rather than directly on the hostplants. The eggs are laid at depths to 15 mm, and up to six eggs have been noted at any oviposition site. The females walk about the ground probing small cracks with their long ovipositors until they are satisfied with the location before the egg is laid, and all the time the wings are raised and lowered rhythmically to expose the flash colours of the hindwings, (a habit also seen in S. colona). After the egg is laid, the female may then either fly to a new ground position or continue the probing walk. Females have the capacity to lay 70-120 eggs, and emerge from the pupa in a gravid condition (i.e. its full compliment of fully developed eggs). The egg is pale yellow when laid, but becomes pink about two weeks before larval eclosion. No further information has been recorded about the egg.

Parthenogenetic eggs take 24-93 days to hatch, with the majority hatching after 53 days. In a series of experiments by Douglas 2008, from 17 parthenogenetic females, 1196 eggs were obtained, of which only 21% started embryogenesis (larval development), and of these only 22% produced viable emergent larvae (4.6% of the total original eggs).

The first instar larva is purplish-pink coloured at eclosion, similar to S. 'Ignita'. It is postulated that newly eclosed larvae burrow through the soil until they find an edible root. No larvae have been reported to occur within the tussock base of the hostplant, and are therefore believed to spend their entire lives within the root zone of the host. At maturity the larvae are present within the deep parts of the root zone to 20 cm. Its colour has not been documented, but is likely to be purplish. At pupation the mature larva constructs a near vertical silk lined tunnel from the deep roots zone to just below the ground surface (10-30 mm gap), sealing off any deep lateral feeding tunnels or galleries, then pupates in the tunnel, head upwards.

Although not directly studied, it is believed the brown pupa is mobile (forwards or backwards) with the abdominal segments being moveable. The pupa has a typical shape and form to other sun-moths; e.g. S. 'Ignita' and S. plana. At the time of adult emergence from the pupa (ecdysis), the pupa forces its way through the surface cap of the tunnel by its traction mobility due to serrated, transverse dorsal ridges on the abdominal segments and the adult then emerges from the exuvium leaving part of the latter protruding from the tunnel. If unable to acomplish that method then the moth breaks out of the pupal shell and makes its way to the surface, with or without the exuvium. The life cycle of the moth is believed to be 2-3 years similar to other large sun-moths, although this period has yet to be confirmed by breeding experiments.

The type species came from the Adelaide region, possibly the Barossa Valley. It is morphologically similar to S. theresa and S. colona, and also to another large species S. collecta to be found on the Great Dividing Range in the eastern states. The moth has probably suffered from farming practices, the smothering of the native grasses by exotic grasses and weeds, urbanisation and also in the Two Wells area from the historic aerial spraying for mosquitos. 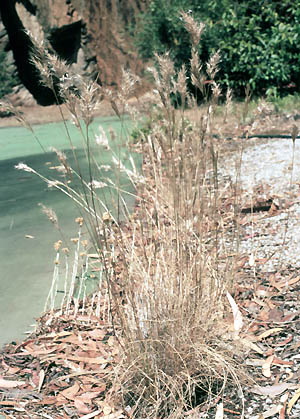