Moths can be as pretty and intriguing as butterflies. Most moths have evolved to fly at night but there are also day flying moths. The night moths tend to be drab coloured, especially their forewings, usually having a cryptic pattern that blends in with green foliage or brown bark or even lichen and fungus, used by the moths for camouflage protection when they are resting during the day. But quite often their hindwings are brightly coloured which they can use as a sudden flash-display mechanism when they are in a resting position, to startle predatory birds that are looking for an easy meal. Day flying moths, however, can be brightly coloured and just as beautiful as butterflies. Often these bright colours in the larger moths signify they are distasteful, and some moths like the day flying black and white/yellow Agaristid moths can also have aposematic coloured black-red-orange-yellow marked bodies signifying their distaste. When disturbed, such moths flagrantly expose their abdomens to predators to warn them of their distaste. The smaller bright coloured day flying moths use their colours to blend in with flowers. Some larger moths are tailed, such as the giant male Australian Atlas Moth (or Hercules Moth) and the Brown Swallowtail Moth occurring in the tropics. When settled, most moths rest with their forewings folded over their hindwings in the shape of a pitched tent or roof, usually with their antennae folded out-of-sight beneath their wings. Some moths like the Geometridae rest with flattened wings, but very few rest with wings fully open and upright like butterflies.

A lot less is known about South Australian moths than butterflies, which is largely due to a lack of published information and images. But in recent years there has been a marked improvement in information in both books and on the Internet. There are about 11,000 described moth species occurring in Australia (Nielsen et al, 1996), with estimates of about the same number undescribed, (but moth species are notoriously variable in their markings, so there may also be some doubling-up in species numbers). More detailed information is still required on the biology and food hosts of South Australian moths, which can be published in the newsletter of Butterfly Conservation South Australia.For information on how you can further take an interest in moths and butterflies refer to Butterfly Conservation South Australia. 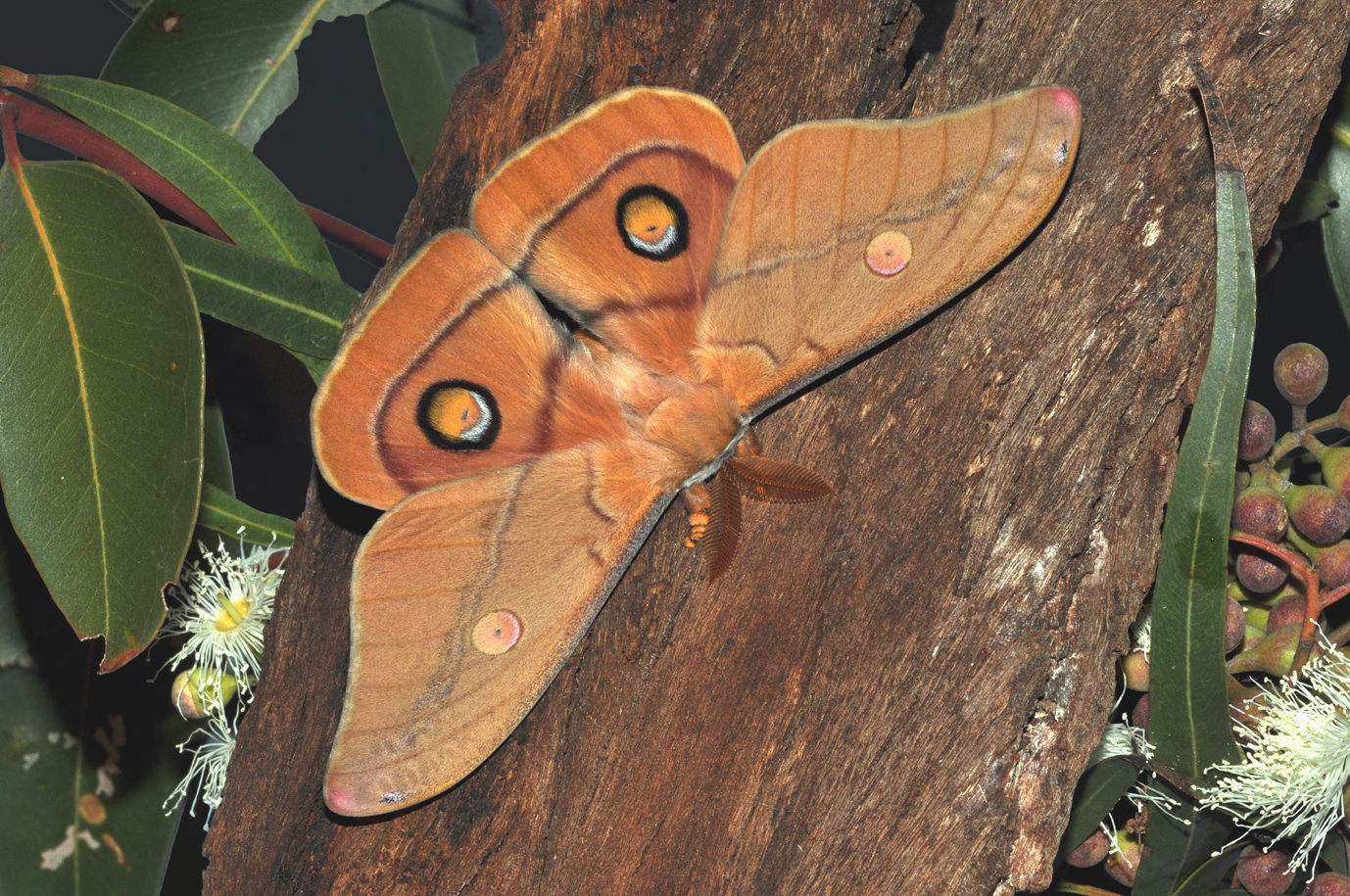 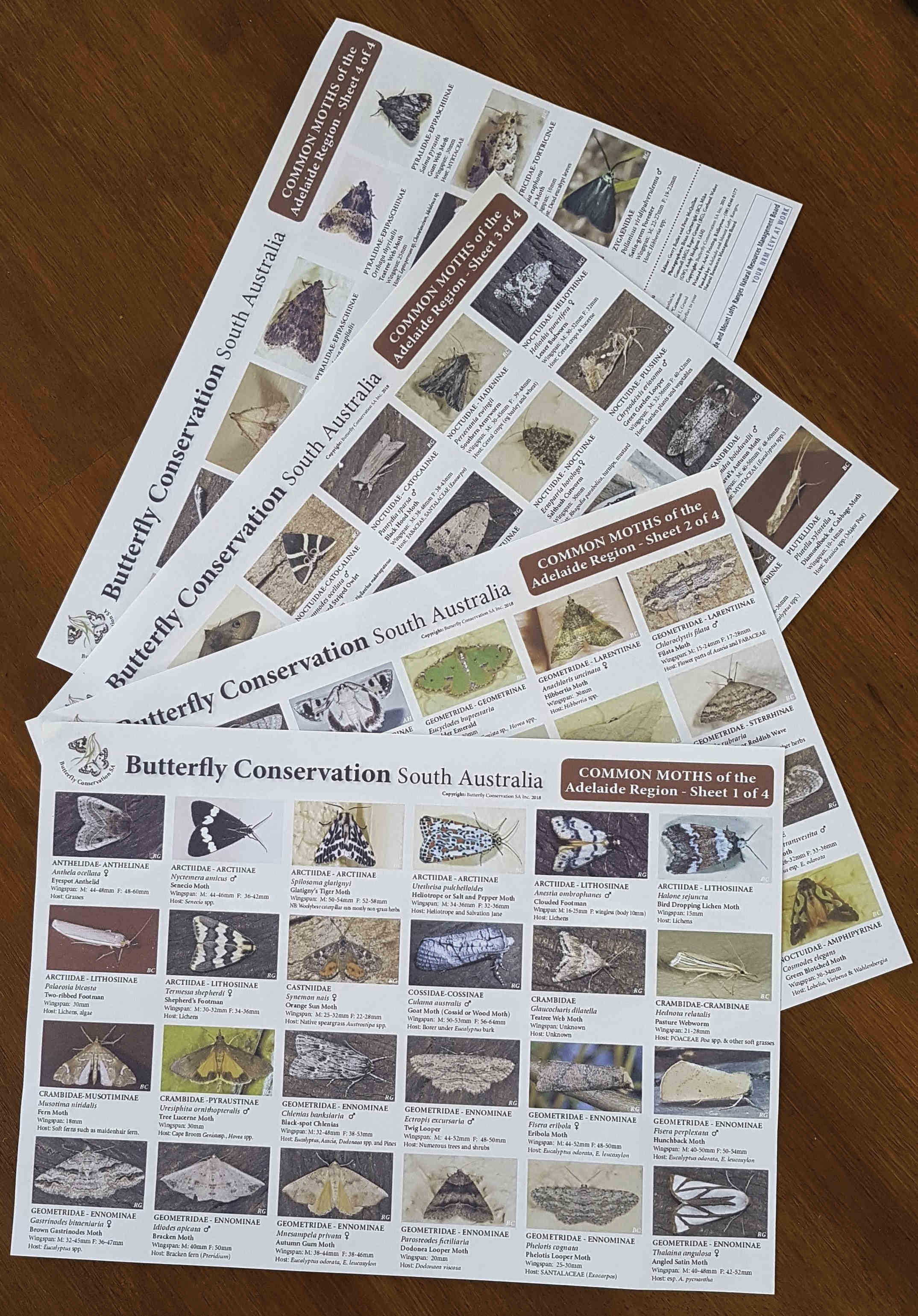 Moths comprise both the smallest and the largest of the Lepidoptera, from a few millimetres to as large as a dinner plate. Their ancient ancestors flew alongside dinosaurs. They can be solitary or they can occur in massive migratory swarms, the latter often unnoticed during the night. They are a large food source for night flying birds (owls) and animals (bats), and also our nocturnal, native marsupial animals. Most moths have coupled fore and hind wings, usually by a spine-like frenulum process on the hindwing that fits into a groove on the forewing underside, effectively forming a more efficient single wing. Males of each species tend to have one spine while the females have two or more spines, or sometimes even a brush of hairs. Some moths make a clicking noise when flying, and some can make a whistling sound. Some, like Hawk Moths, can hover like a humming bird or helicopter. Some moths (particularly the females) do not have wings or are rudimentary. Some have clear wings or large clear windows inserted into their wings (Hercules Moth), others have plume-wings like the feathered wings of birds, and these latter moths tend to be small and often look like mosquitos. Others have large ocelli 'eyes' on their wings (Emperor and Granny or Old Lady Moths) that mimic the eyes of lizards, night birds or small animals.

Some moths, like Bardi, Rain, Wood and day flying Sun-moths, may not have a proboscis for feeding and live off stored fat accumulated during their larva-pupa stage. Those with a proboscis feed mostly on flower nectar, but some feed on ripe fruit (fruit piercing moths), plant sap, 'honey-dew' of sap-sucking insects, animal sweat and fresh excrement, and even animal blood (similar to vampires). Some moths can run quickly like a cockroach. Moths hear by picking up sound vibrations on specialised auditory hairs on their bodies, and some moths have specialised tympanal ears capable of picking up the ultrasound of flying bats and can thus evade these predators while in flight. The males often have comb-like or pinnate antennae that are capable of detecting female pheromones (scents) from very large distances up to about 20km! Some moths are mimics and resemble bees and wasps to escape predation, while some larger tropical moths mimic poisonous swallowtail butterflies. A few moths at rest mimic bird droppings.

Female moths usually lay their eggs carefully on or near their host, singly or in small to large batches, but some like the large Rain Moths are often capable of randomly laying vast numbers of tiny eggs. Moth eggs come in a variety shapes and can be smooth or ornamented. Some females are parthenogenetic, reproducing themselves without cross gamete fertilisation. Moth larvae (caterpillars) are usually herbivorous and are sometimes a pest of our crops, but sometimes they also feed on fungus, algae, lichen and moss, or can be carnivorous (on other insect or moth early stages) or feed on animal matter, corpses and excrement (Clothes Moths). They can feed above ground on bark, foliage, flowers, seeds, or feed on the ground on leaf litter, or bore into stems, trunks and seed-pods, or even live underground on roots and tubers. Others can be found in our homes living on our carpets and clothes, and in the pantry. Some even live under-water feeding on aquatic plants, and are capable of extracting oxygen from the water via filament-like gills. Some larvae (particularly the witchetty grubs) can take several years to mature, and the larva-pupa stage of the Yucca Moth in North America can live for 30 years. Bright aposematic coloured larvae are usually distasteful to predators.

Different groups of moths usually have distinctive types of larvae or larval shelters. Larvae can be smooth or hairy, the latter can be sparse or dense (woolly bears) or consist of tufts. Some larvae can have a velvet appearance like the large Snout Moth larvae. The pest Noctuidae moths have the cutworm or armyworm larvae, while the Geometridae have the looper larvae. The Ghost, Goat, Rain, Swift, Wood, and day-flying Sun-moths have witchetty or bardi grub larvae, and those of the former can be quite large. Cup Moth larvae are brightly coloured and slug-shaped having extendable stinging tentacles like a sea anemone, while its pupa shelter has a small cup or gumnut shape. Bag Moths live in communal bag-like silk shelters in the foliage of the host plant. The Case Moths have larvae that live in long portable shelters formed from cut-off twigs or leaves. The large Hawk Moth larvae have a dorsal spine at their rear end, while Tiger and Anthelid Moths often have woolly-bear larvae. Some larvae like the Fruit Piercing and Hawk Moths can have large eye-spots. The very small moths can have the wriggling leaf-roller larvae, or leaf miners that 'mine' beneath leaf cuticle creating clear windows in leaves, or eat the new growth tips or tunnel into stems and green fruit (Codling, Fruit and Borer Moths).

Most moth larvae construct some form of a silken cocoon within which they pupate. Many moths pupate within soil or leaf litter. Those larvae that are already protected by bags, cases, cups, holes and tunnels etc, will still line their final resting place with silk, which probably acts as a water repellant.

Few moths are seen flying during the day in South Australia, but on suitable (warm) nights an outside light (without moon-shine) can attract many local moths. An ultraviolet light and the bright mercury vapour lights to be found on certain roads will attract even more numbers. Moth numbers and diversity increase significantly as one enters the realm of native vegetation habitat such as the Mt Lofty Ranges and country areas. Moths can fly during hot or cold weather, and even tolerate light rain.

McQuillan, PB and Forrest, JA (1985) A guide to Common Moths of the Adelaide Region. Special Educational Bulletin Series (No. 5), 52pp. South Australian Museum, Adelaide. [A good quick reference to many South Australian moths, with colour and b/w images, although some scientific names are no longer correct]

Marriott, P. Moths of Victoria. Entomological Society of Victoria. [An up to date series of parts started in 2008, comprising booklet and CD Rom on moths and their early stages, currently in progressive publication. Many of the moths illustrated also occur in South Australia]