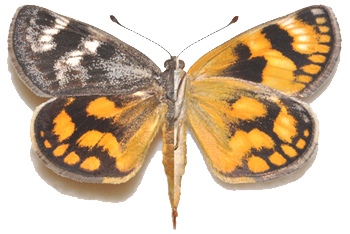 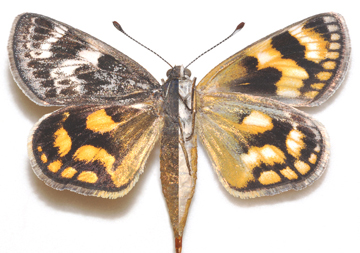 A locally common species, restricted to temperate areas of east South Australia, and also occurs in Victoria. Its primary larval hostplant is Lepidosperma carphoides (Black Rapier-sedge) (Cyperaceae), which is also only found in temperate areas of east South Australia including Kangaroo Island, but interestingly not on Yorke Peninsula. In the latter area in the absence of L. carphoides, females utilise Lepidosperma congestum (Clustered Sword-sedge) (Cyperaceae). L. carphoides also occurs on east Eyre Peninsula, but here S. parthenoides is replaced by S. larissa.

Synemon parthenoides belongs in a similar cryptic-patterned group of sedge feeding sun-moths in South Australia that include S. discalis and S. larissa. The group adults also possess a functional proboscis, and in combination with their different genitalia and other morphological and feeding attributes, suggest they belong in their own genus as compared to the grass feeding S. collecta group. S. parthenoides differs from S. discalis mainly by its larger size, different male genitalia, and several small differences in wing morphologies, such as the upperside (UPS) ground colour of the forewings (FW) is black in S. parthenoides (SP), but brown-black in S. discalis (SD); there is not a narrow central black transverse zig-zag line in the central part of the FW UPS as in SD; the inner margin (next to abdomen) orange coloured area of the hindwing (HW) UPS is joined to the central HW orange spots in SL, but usually not in SD. S. parthenoides differs from S. larissa (SL) by different male genitalia; the antennae clubs in SL are brown-black, but brown in S. parthenoides; the large black spot in the UNS FW area next to the costa (the leading edge of the wing) in the basal part of the wing closer to the body is closed off in SL to form a complete circle, but is open in SP. S. parthenoides also has a morphology and size similar to S. selene but the 'ground' colour in the latter is brown rather than black, and the former tends to fly in late spring-early summer rather than late summer-early autumn as for S. selene. Interestingly, S. larissa has morphological attributes comparable to both S. discalis and S. parthenoides, and in combination with its present geographic isolation might suggest that S. larissa originated as a hybrid of the other two species occurring in the past during the late Pleistocene climate cycling event (last ice age ~15,000-70,000 years ago), and hence an absence of S. parthenoides on Eyre Peninsula. It has a habitat preference for open, moist sand-based woodland in which the larva hostplants grow.

On Yorke Peninsula the primary hostplant L. carphoides is absent, but there is an abundance of L. congestum upon which S. parthenoides thrives. However, the sun-moth has taken on a slightly different morphology compared to the nominotypical form, and has been named subspecies valma. The latter tends to have a more vivid morphology, being more yellow coloured and with better developed white markings, and also some minor male genitalia differences. S. parthenoides also occurs on Kangaroo Island.

S. parthenoides males have a wing expanse of 35-46 mm and females an expanse of 41-56 mm, and tend to fly during late October-early January. Flight starts later than the flight of S. discalis if they occur together. They tend to fly above the top of their hostplants ~1m. Typical of most sun-moths, the males start to fly earlier in the season than females, and the flight season for both sexes tends to be later in the colder or more elevated parts of its range.

It is most active during the hot sunny periods of the day, peaking about midday. Males initially feed from flowers then tend to fly about the hostplant habitat looking for females to mate with, particularly those that have newly emerged from their chrysalis. Eventually the males settle down, often setting up small leks in open areas, waiting for females to fly past. They usually settle on or near the ground on bare sticks. Periodically, if no females or other disturbances occur they will fly off to patrol the hostplant habitat looking for females, and if unsuccessful will not necessarily return to the same lek. They can sense the pheromone presence of the females and often wait at such indications even if the female is not visible or active. The females tend to spend most of their time laying eggs until mid-afternoon, when they start to feed from flowers before eventually seeking a place to spend the night. Some females of ssp valma in the absence of males will rest on the clustered seed heads of the L. congestum hostplants which they mimic very closely.

The female lays its eggs below ground adjacent to or on the stems of the hostplant. This she does by either walking up to the plant on the ground if possible, or by working her way down within the plant from the top. She uses her very long stiff ovipositor, that can be extended from the end of her abdomen, which she probes down the sides of the hostplant leaves and then lays the single egg as deep as she can place it. The eggs are normally pale yellow when newly laid but eventually turn white near larval eclosion. They are ellipsoidal spindle shaped about 2.05-3.95x0.85-1.1 mm and have 10-15 prominent longitudinal ridges, linked by many (~60) finer cross striae. The first instar larva ecloses (emerges) after about 22-32 days, is 3.5-4.0 mm long and subtranslucent pale yellow coloured with a yellowish brown head.

Immature larvae are sub-translucent white and live below ground within the culm of the hostplant similar to the other members of the group. Mature larvae are pink coloured, becoming increasingly more orange-red coloured near pupation, and live in the deeper root zone of the hostplants. The prepupa usually burrows up to half a metre away from the hostplant in the sand before constructing a vertical silken cocoon 7 cm long at the end of the tunnel that has a sealed contact with the soil surface. Pupation takes place at the bottom of the cocoon, head upwards, where it remains until eclosion. Pupa duration is unknown, but likely to be about a month. At eclosion the pupa apparently forces its way vertically to protrude through the top of the cocoon and the surface of the soil before the adult leaves the exuvia to expand its wings, leaving the exuvia (empty chrysalis) protruding empty above the ground. Studies suggest the larva-pupa duration can be accomplished in two years. However, in captivity it is found the prepupal requirements are very rigorous, and if not to their liking they can delay pupation by existing in a semi-torpid condition for at least a further 3 years. Larval activity often kills the hostplant in the areas of eating activity, particularly in the central part, and pupation often also occurs within the dead part of the host.

The living pupa has yet to be documented, but it is estimated to be about 19-22 mm long based on empty exuvia. The pupa is brown coloured with a series of dorsal abdominal serrated ridges that point backwards restricting the pupa to forward or rolling movement only (similar to S. discalis). It does not have cremaster hooks at its posterior end to impede its movement in the cocoon.

The adults are often seen nectaring on flowers in the late morning or later in the afternoon, and include most flowers that occur in the vicinity of the habitat, including Calytrix tetragona (Common Fringe-myrtle) and Leptospermum myrsinoides (Heath Tea-tree). S. parthenoides is in direct competition with humans for its habitat, and is therefore under threat from the increasing urbanisation intrusions into its habitat, and the new government fire management policies of repeated burnoffs in conservation parks that has decimated fauna, particularly lepidoptera. The nominotypical type species came from the Adelaide region. 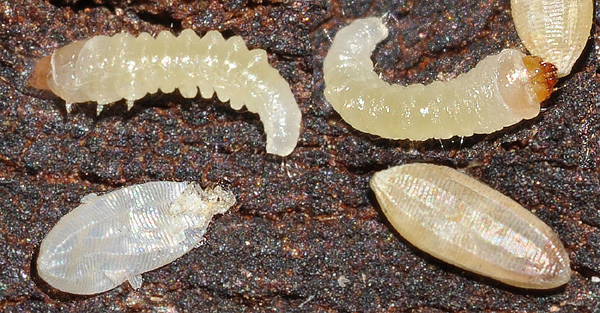 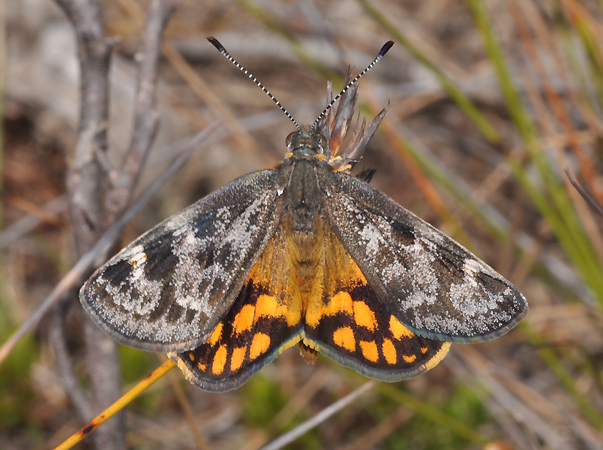 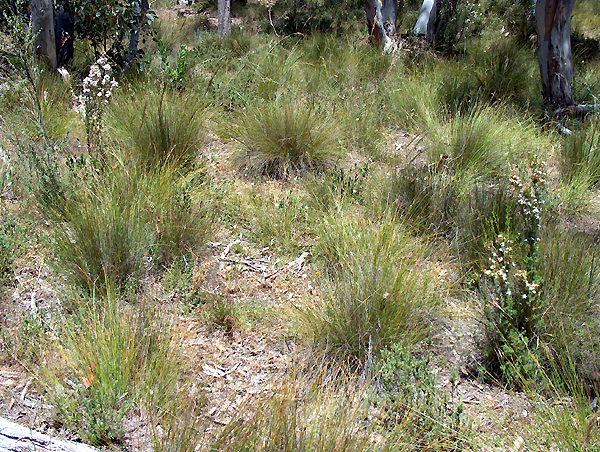 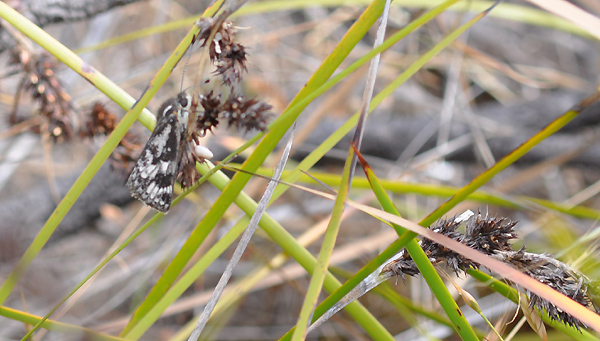