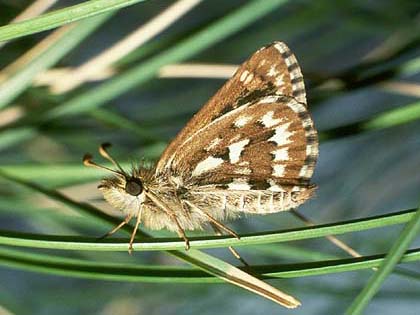 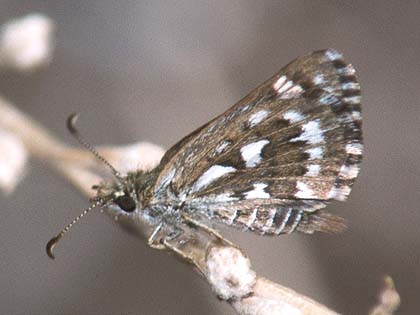 A small, but prettily marked skipper when newly emerged. The pattern of the wing undersides is cryptically marked so that the skipper blends in with either the ground upon which it frequently settles, or with the dead leafy parts of its hostplants. The skipper occurs as two subspecies in South Australia. The typical subspecies A. c. cynone is characterised by an orange-brown underside colour, whereas A. c. gracilis usually has a grey-brown underside. The distributions of the two subspecies are separated by the Mt Lofty Range.

Both sexes seem to spend much of their time feeding from small flowered, low bushes, particularly the coastal sea-rocket (Cakile species). It has a relatively slow flight, and both sexes fly near the ground. Males often dune top, or will set up territories on bare or open ground between the hostplant, waiting for newly emerged females with which they can mate.

Small, initially pale yellow, hemi-spherical (domal) with strong vertical ribs numbering 11-15. If the egg is fertile, then during the following day it acquires a large orange-red dorsal spot and a jagged orange-red lateral band. Eggs are normally laid singly, either on the hostplant or on adjacent plant debris, and usually in a full sun situation.

Larval development within the egg commences immediately after being laid, and they reach a fully (or perhaps near fully) developed condition after about 18 days when their black heads can be seen against the inside-top of the now transparent egg shell. However, larvae will not fully develop and emerge from the eggs until they have been wetted by extended autumn rains, as the latter either promotes new young growth on the perennial hostplant grasses, or new annual grass seedlings. The larvae require at least three days of continuous moist conditions before they will emerge. Developed larvae within the eggs have the ability to become quiescent (dormant) and live off the fat reserves in their bodies for a considerable period of time, and larvae developed within eggs laid in March can survive through the hot autumn months and into early winter until at least July. The egg shell is sometimes eaten by the larva after its emergence.

Initially pale yellow, becoming greenish after eating the hostplant, and with a large smooth and shining dark brownish black head, and the neck (prothoracic plate) is brownish black. The second and third instars acquire pale longitudinal lines, and the head becomes rugose and gradually acquires the final pattern described below.

After emerging from the egg shell (usually during the morning), and after sometimes eating a portion of the shell, the larvae move to a young leaf on the hostplant. Usually after sampling the leaf to determine if it is to its liking, it will then construct a tubular shelter by either bending back the distal portion of the leaf and silking the two parts of the leaf together, or by joining the edges of a lower portion of the leaf. The silking of the edges is done in a continuous manner (so that the edges are completely sealed), which differentiates it from Ocybadistes and Taractrocera larvae that utilise the same grasses, as they use individual strands of silk to hold the shelter together, (the stitching looks like a ladder with the leaf edges not completely sealed). Later instars construct tough, silk lined shelters by joining the outer parts of several leaves, or from other extraneous leaf debris that has been caught up in the hostplant. They feed at night, hiding from predators during the day inside their shelters. The presence of larvae on the hostplant are readily discernible by the notch shaped eat marks along the outer parts of the leaves. The young larvae feed throughout winter and early spring, and reach maturity at the end of spring. At this stage much of the hostplant has dried off, and in some species such as Brachypodium the grass will completely die off. If there are still leaves on the hostplant then the larvae will construct a multi-leaf shelter within which it will wait in a torpid state without feeding until the following late summer and early autumn, when pupation finally occurs. If there are few or no leaves on the hostplant such as Brachypodium, then the larvae will leave the hostplant and construct a silken bag shelter from either fine debris around the base of the hostplant or to utilise a large curled leaf for a shelter.

The final instar is about 20mm long, fat and humped (typical of the Trapezitini), greenbrown, brown or pinkish-brown coloured with a darker dorsal line and further indistinct longitudinal subdorsal lines. When in a torpid state the colour is usually brown or pinkbrown. The head is large, rugose, with some short hairs, slightly notched at the top, pale brown with a dark brown or black frontal vertical mark edged pale yellowish brown, and further edged darker brown. The body is without long hairs, but bears numerous vase or wine glass shaped secondary setae set on simple smooth raised bases. These setae impart a rough scabrous appearance.

Pale brown, cylindrical, 12 mm long, head rounded and very rugose. There is a pair of small black raised areas situated subdorsally behind the head. The head cap (operculum) has black scleritised areas anteriorly and antero-dorsally. The abdomen, thorax and parts of the head are bristly. The cremaster is flattened. The whole pupa is covered in a white water repellent powdery bloom. Pupation occurs in the final larval shelter that is usually situated around the base of the hostplant. The pupal duration varies from three to four weeks. Pupation is probably induced by the shortening of daylight hours although there has been no experimentation to ascertain this aspect.

It is single brooded with a short flight period during early autumn, from March to mid-April, with an occasional carryover to May. Historically, population flights used to be synchronised, such that large numbers of the skipper would be seen together, yet a week later there were virtually none flying. However, such flights are now rarely reported. The flight is affected by the cold weather fronts that start during mid autumn, and may significantly curtail the flight period.

Anisynta cynone cynone has historically been recorded from the coastal areas east of the Mt Lofty Range in the Goolwa and Kingston areas, but recently (2011) a significant new population has been found. Anisynta cynone gracilis used to have a patchy distribution on Yorke Peninsula, the Adelaide Plains from Willunga in the south to Port Wakefield in the north (west of the Mt Lofty Ranges), and in the Mid-North. It is presently only known from the Willunga to Port Wakefield coastal areas, and from Burra and Gladstone in the Mid-North. However, very little survey work has been undertaken for this skipper and it is possible it may have a more extensive range. A recent autumn survey (2009) on Eyre Peninsula did not find any populations of the skipper. Two other subspecies are recorded from the Murray Valley and grassland areas along the west side of the Great Dividing Range in Victoria and NSW. A subspecies A. cynone grisea occurs immediately east of the state border in Victoria, within the Murray mallee, and it is possible this skipper also occurs in South Australia, particularly in grassy areas along the Murray Valley.

Temperate grasslands in a variety of habitats, but often in degraded saline habitat that escapes the attention of farmers. It is now largely confined to coastal areas. It prefers it hostplant grasses to grow in exposed areas among other shrubs, although its habitat sometimes overlaps with the broad-acre grassland skipper, the White-veined Grass-skipper (Herimosa albovenata).

This is a native grassland skipper and consequently has suffered considerably from agricultural disturbance and the effects of overgrazing and trampling by stock, and also the destructive effects of the introduced rabbit. Grass fires are also a severe local threat as are the periodic droughts. Coastal disturbances from whale watching, dune buggies, fishing and walking tracks, and the steadily advancing urban development also contribute to the habitat destruction.

Known skipper habitat within the remaining native grasslands used for pastoral purposes need to be managed in an ecologically sustainable manner. Feral rabbit populations need to be kept out of the Coastal Reserves. The skipper does not appear to be as resilient as the White-veined Grass-skipper, and specific grassland habitat may have to be conserved for its long term survival. 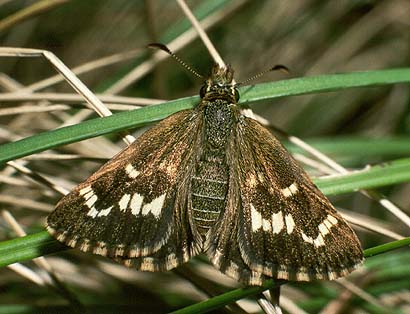