The best known of the whites, it is often a pest in our vegetable gardens. Originally a Northern Hemisphere butterfly, it was first reported from Australia at Melbourne in 1929. By about 1937 it had become well established in Melbourne, and over the next six years during the Second World War period, it spread across much of non-tropical Australia. It is likely much of this rapid dispersal was facilitated by the war effort, with the cultivation of cabbages, cauliflowers and other cruciferous vegetables, and the subsequent widespread transportation of these vegetables containing the early stages of the butterfly. It was first documented from South Australia in 1940, and within two years was quite widespread in the southern parts of the state. It is presently one of the most common butterflies in temperate South Australia, with its larvae adapting well to the extensive broad-acre cultivation of canola (Brassica napus) in agricultural areas.

It is sometimes confused with the Caper White, but the latter is easily distinguished by the black wing margins. In the more northern areas or in the Riverland, there is potential for confusion with several other white migrant butterflies, but the two or three prominent black spots readily visible on the wing uppersides of the Cabbage White is the best method for separation. However, the male of the Yellow Albatross (Appias paulina) is very similar but the chances of seeing this butterfly flying in South Australia are very remote. The Cabbage White usually has an erratic flight in the urban environment, but out in the open agricultural districts the flight can be fast and direct.

The entire life history of the butterfly is poisonous to varying degrees. The larval hostplants contain mustard glycosides which the larva is able to assimilate and convert to mustard oils (isothiocyanate irritant poisons) to be retained in its body as a protection against predation. These poisons can be passed on to the pupa and the adult butterfly. The poisons are also probably passed onto the eggs by the female adult butterfly to complete the cycle. These poisons are usually in sufficient concentrations to only sicken the vertebrate predators or at least taste unpalatable, so that the predators can learn from the mistake and pass on the experience. They are not meant to cause death as this would likely result in larger numbers of the insect being killed.

This butterfly is sometimes called the Cabbage Moth, which is incorrect. The Cabbage Moth (in fact there are actually several moths that have a liking for cabbage; e.g. Hellula sp) is a small true moth, which like the Cabbage White, is an introduced pest that has a destructive liking for cruciferous crops. Both species require spraying for regulation and in the broad-acre situation this is usually done aerially, and unfortunately toxic spray drift and sometimes irresponsible applicators will damage any adjacent environmentally sensitive areas. It is the aim of gene splicers to either incorporate elements into the crops that are toxic to the larvae so that less or no toxic spraying is required, or to alter the oil structure of the plants such that the female butterflies and moths will not lay eggs on the plants, or to make the plants non-susceptible to the herbicide 'Roundup' when it is used to control weeds within the crop. The problem with the former genetically modified GM plants is that they will then have no natural insect herbivore if they or their hybrid offspring were to escape into the environment, unless kangaroos or a new set of insect herbivores were to take a liking to the new plants. The gene splicers' answer to this is to further produce plants that would lead to hybrids and crops that hopefully remain infertile. One of the additional problems is that the toxic plants may also produce toxic pollen, which when wind scattered onto other flowers, plants etc in adjacent areas, is potentially lethal to other insect herbivores, and nectaring butterflies, and depending on the type of toxins, could also affect possums, honey-eaters and lorikeets.The initial GM canola being introduced to farming Australia is the variety tolerant to 'Roundup'. Unfortunately, we can now look forward to GM canola proliferating along our roadsides and into our conservation parks smothering all the indigenous understorey flora, and there will be no way that it can be controlled without resorting to even more highly toxic herbicides or if the GM people invent another type of 'Roundup' that will control the escaped canola. (Sounds like a recipe for a class-action).

Pale yellow, narrow spindle shape, height about twice the diameter, tapering basally to a flat base, apex tapering to a blunt flattened point, with about 14 well developed vertical ridges and numerous indistinct lateral ridges. Laid singly on the hostplant, usually on the leaves. The eggs hatch in about 4 days. The larvae eat the egg shell before proceeding to eat other parts of the hostplant. If the hostplants are few then the females tend to visit these plants in a transitory mode, by laying eggs and then moving on. If the hostplants are abundant, such as in cultivated areas, then they will tend to stay around the plants.

Initially pale yellow, with fine hairs, and the head is pale yellow, smooth and shining. After eating the hostplant, the front half of the larva becomes greenish. The hairs also become tipped with clear fluid. The second instar larvae is similar to the first. Subsequent instars acquire a uniform green colour.

Initially the larvae feed by scouring the leaf surface, accumulating a trail of strung-out dung pellets (frass) in their wake. Older larvae will eat the entire leaf and if hungry enough, also other soft green parts of the hostplant, without leaving a dung trail. They feed openly during the day. When strongly handled or attacked, the larva will regurgitate a fluid which is more poisonous than the rest of its body. The larva will vigorously swing its head about in an attempt to spread the poisonous regurgitant onto the predator. Like most other butterfly species, the larvae silk the surface of the leaf before they start eating, and anchor their rear ends firmly to the silk in case the leaf is accidentally knocked, or to support themselves if they have to swing their head about when a small invertebrate predator attacks. When resting, the larvae often align themselves along the major veins of the hostplant leaves, such that their yellow dorsal or lateral line imitates the vein of the leaf, providing some additional camouflage.

All stages of the larvae have special white-based glandular hairs (setae) which secrete mustard-oil (isothiocyanate poison), visible at the ends of the hairs as clear coloured droplets. This affords some protection from both invertebrate and vertebrate predators.

The final instar is long cylindrical shaped, about 27 mm long, covered in very short simple black coloured secondary setae imparting a rough scabrous appearance. The body is green coloured with narrow (sometimes indistinct) yellow dorsal and lateral lines. The head is green, sometimes with pink mouth parts, and hairy without droplets. The body has many short specialised secretionary hairs, black coloured, that emanate from a white simple subconical base, with each of the hair tips having a clear fluid droplet. Sublateral hairs are white without droplets. The larval duration is about 17 days.

Angular elongate typical for the subfamily. The head of the pupa has a blunt pointed anterior projection, the thorax has a prominent dorsal ridge produced into a central obtuse point, there is a dorsal abdominal ridge, and there is a subdorsal ridge running the length of the pupa from the wing bases, along the junction of the thorax and wing edges, and then laterally along the abdomen, and on this ridge are a further short projection at the wing base, and two very prominent unequal pairs of pointed dorso-lateral abdominal projections. The proboscis (on the ventral side of the pupa) extends slightly beyond the wing areas along the abdomen, which seems to be a common attribute of the subfamily. The pupa is about 17 mm long, including the anterior projection. It is attached by a cremaster and central girdle to the hostplant, or more usually to nearby vegetation, a rock, fence, wall or some other pale coloured object, often well removed from the hostplant. It reclines from the vertical. The colour of the pupae usually matches the substrate to which it is attached. On the hostplant or other leafy vegetation it is green, while on other coloured objects it is some shade of brownish, greenish or yellowish grey. There is a dusting of very fine black marks, and the ridges and anterior projection are outlined in pale yellow. On green pupae the prominent dorsal and dorso-lateral protuberances are tipped pink, while in the grey pupae they are tipped black. The pupal period is about 8 days.

When numerous, the larvae have the potential to damage agricultural and vegetable crops, and a brood can be quickly completed in 3-4 weeks.

In southern temperate areas it is possible to find flying butterflies throughout the year. It normally overwinters as pupae, but some adults also hibernate or become torpid during the winter months, and will briefly emerge from hiding on the odd, hot fine winter day to fly and feed.

The butterfly occurs throughout the temperate and sub-tropical latitudes of Australia, including Kangaroo Island and Tasmania. It generally occurs wherever there is human habitation. In South Australia it is rarely seen in the hot, northern pastoral areas.

It is most common in the southern settled areas wherever its introduced hostplants are cultivated or have escaped as weeds. Most of the weedy hostplants require assured rainfall, and can be found in most habitats. In the northern pastoral areas many of the mustard weeds now occur along the ephemeral creeks and rivers.

None required. Thrives in urban gardens. Considered a pest. 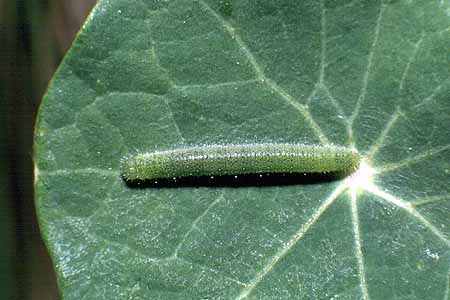 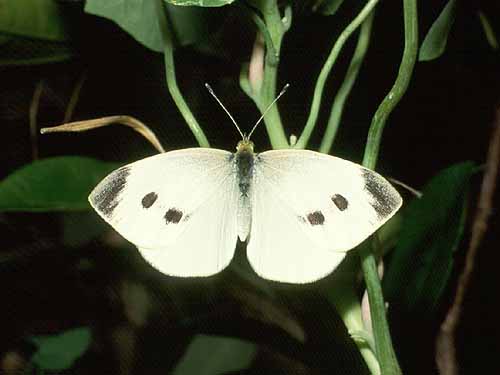 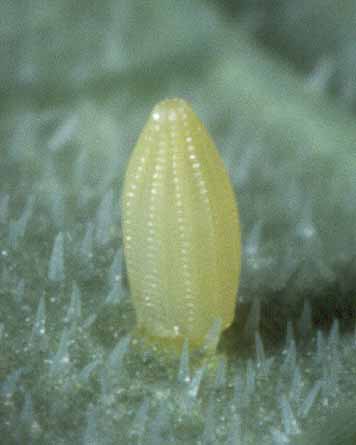 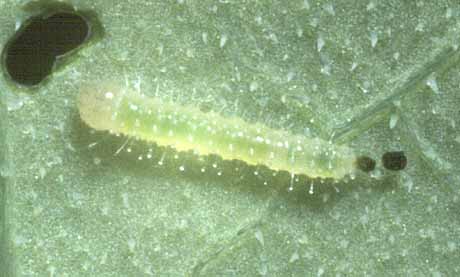 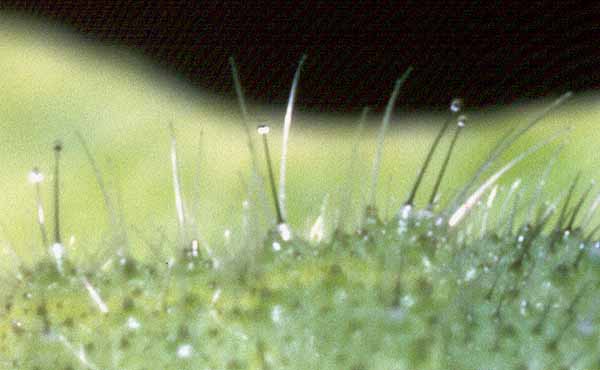 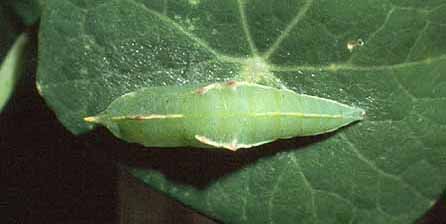