This butterfly belongs to a small group of white butterflies that are the only members of the Pieridae endemic to the Australian Region. The larvae of this group are unique within Australian Pieridae in that they have strongly forked tails, a feature normally seen in the Nymphalidae and particularly the Satyrinae. This feature is also seen in larvae of the Pierid Cuneacolotis agoye from Africa, although this species belongs in a completely different group of the Pieridae.

The Narrow-winged Pearl-white is more common in the northern tropical areas of Australia, where it will often undertake southerly migrations, usually of limited duration, but sometimes they can reach into temperate regions. The resident population of the butterfly in the Flinders Ranges is probably a relict of such migrations. Pearl-whites could easily be mistaken for Cabbage Whites from a distance. They are distinguished from the latter by being slightly smaller in size and by lacking the large black spots in the forewings, although in South Australia the two species are unlikely to occur together. The butterfly is more likely to be seen flying with the Caper White as both share the same larval hostplant in South Australia.

The butterflies are usually seen in small numbers near their hostplant where their flight is fluttery but quite active as they fly about the plants, frequently flying away from the plants at about head height to investigate other nearby shrubbery, but at some stage, eventually returning to the same hostplant. During migrations in tropical areas their flight is reasonably fast and direct at about head height.

Capparis species including C. mitchellii (tree caper) (Capparaceae). The larvae will eat all the softer green parts of the hostplant, but prefer the leaves.

White when newly laid, but which become speckled with dark pink after a day if fertile. Spindle shaped with the height about twice the diameter, the lower half tapering to a flat base, the upper half tapering to a blunt point, with coarse vertical ribs numbering about 14-17 most of which continue to the top of the egg and then enlarge to produce a rosette pattern when viewed from above. There are also very fine horizontal ribs. Laid singly on the green parts of the hostplant, usually on the leaves. The females actively fly about the tree caper, then suddenly alight on the foliage and quickly lay a single egg, the process usually taking less than 5 seconds. Some females just plunge into the foliage like a dive-bomber to quickly lay the egg. The eggs hatch in 4-6 days.

Initially pale yellow, gradually becoming brownish or greenish after eating the hostplant, long cylindrical shaped, the skin is shiny, with dark setae (hairs) arising from small dark coloured, simple raised bases. The hairs are longest at the anterior and posterior ends of the larvae, and again dorsally about midway along the larvae. Initially the anterior dorsal portion of the larva is purplish coloured. This is quickly replaced by dorsal, purple coloured patches on the second thoracic segment (TS) behind the head, again mid-dorsally (on abdominal segments AS 2, 3, 4), and again posteriorly on AS 8. The head is pale yellow, large, rounded, smooth and shining, with a few dark hairs. The larvae eat their egg shells first, then follow with whatever the eggs were laid on.

Early stages of the larvae have special glandular setae which secrete poison, visible at the ends of the hairs as clear coloured droplets. The poison tipped setae decrease in number as the larvae get larger, and by the final instar are absent. The composition of the fluid is unknown, but is likely to be a deterrent to both invertebrate and small vertebrate predators, as the hostplants contain irritant glucosinolates, which the larvae are capable of assimilating and converting into poisons. This affords some protection to the larvae while they feed openly on the hostplant during the day. Larvae start to produce the poison to the hair tips soon after they emerge from their egg shells.

The second instar is similar to the first but is noticeably greener and the purple areas become darker, and the posterior end of the larva has a short fork. All the setae are poison tipped, including those on the head, and the simple bases of the setae are well developed. There are some dark purple coloured, larger, specialized scoli-like paired protuberant setae developed dorsally behind the head on TS 1 and 2, and on AS 2, 4, and 8. There are further large, dark purple protuberant, subdorsal setae on AS 2, 3, and 4. The third instar is green, with similar purple markings as before, and only the interspersed longer setae are poison tipped. The forked tail is better developed, and the body acquires numerous short setae, which impart a scabrous appearance. The fourth instar is mostly green coloured with a broad pale yellow dorsal line and the setae have a purplish tinge. The same scoli-like protuberances are present, but are generally not as well developed except for the dorsal pair on AS 2. The purple dorsal protuberances are accentuated as they are set in small white coloured patches. The head is very setaceous and there two pairs of protuberant setae in the front dorsal part. Poison tipped setae are absent.

The first instar larvae eat by initially scouring the green cuticle surface of the hostplant, be it leaf or stem bark, but quickly move to the leaf edges to devour the entire leaf. Thereafter, the larvae remain at the leaf edge, and align themselves very closely along the devoured edge of the leaf, leaving no space between their bodies and the leaf, sometimes producing intricate contortions to remain in such a position. This posture is a camouflage, making the larvae appear as a continuous part of the leaf. Later instars have a yellow dorsal line, which tends to mimic the leaf edge and provide additional camouflage for the feeding larvae. The larvae will weakly silk the leaves of the hostplant to the stemwhen they are feeding.

The fifth and final instar larvae are similar to the fourth instar, long cylindrical shaped, about 27 mm long, covered in numerous dark coloured short setae that impart a scabrous appearance. Poison tipped setae are not present. There are usually paired, small scoli-like setae developed dorsally on TS 1, 2 and AS 2, 8. There are also protuberant (non-scoli) setae developed subdorsally on TS 1, 2, AS 2, 3, 4. The posterior end has a divided tail, which is kept closed so that it looks like a pointed projection. The larvae are green coloured, very finely dusted purple, with a narrow pale yellow dorsal line, the scoli and protuberant setae are purple coloured and are sometimes accentuated by a small white area around the base. When ready to pupate, the larva loses the yellow dorsal line, which it can dispense with in 1/2 hour. The head is green (usually with no pale yellow dorsal line), large, rounded, covered in short dark setae, with at least two pairs of protuberant setae in the front dorsal part, the bases of which may be purple or orange coloured.

The larval duration is about 3-4 weeks during spring in Adelaide under captive conditions, and about 3 weeks in early autumn. It has been reported that larvae during autumn, required only four instars before pupation.

Angular elongate typical for the subfamily, tapering posteriorly, about 19 mm long. The head of the pupa has a pointed anterior projection, the thorax has a prominent dorsal ridge, and there is a lateral flange along the abdomen. The proboscis (on the ventral side of the pupa) extends beyond the wing areas along the abdomen, and which seems to be a common attribute of the subfamily, although the trait is particularly well developed in this butterfly. Mostly coloured in some shade of green, indistinctly marked with a very fine dusting of purplish markings. The ventral part of the abdomen is yellowish. There is an indistinct paler dorsal line that is more obvious on the thoracic ridge, and there is a pale yellow lateral abdominal line. The thoracic ridge and anterior projection are sometimes purplish coloured. There is sometimes a pair of either white or purple, widely spaced dorsal spots (of variable clarity) about midway (AS 2) along the pupa. Attached by a cremaster and central girdle to the outer green parts of the hostplant, usually a leaf.

The pupation position is random, and pupation may occur with the head pointing either upwards or downwards, although the former position seems to be preferred. If pupation occurs on a horizontal leaf then it is usually done on the upperside of the leaf. The larvae either very weakly secure the leaves to the stem with silk if they pupate on a leaf, or they do not bother at all. The pupal duration is about 10-11 days during early summer in Adelaide under captive conditions, while in early autumn it is only 7 days.

Incompletely known, with discontinuous records for the northern Flinders Ranges of September to May, although it is possible the butterfly could be found flying in that area during most of the year. In captivity (in Adelaide) the brood period is about 5-6 weeks, but it is likely to be significantly shorter in its hotter northern breeding areas.

Occurs generally in the northern half of Australia wherever its hostplants occur, which normally grow in tropical and sub-tropical latitude areas. In South Australia the butterfly has mostly been recorded in the northern Flinders Ranges, where its hostplant occurs. The hostplant also occurs in the extreme northeast of the state, but the butterfly has not been seen to utilise the plants in that area. Elsewhere in Australia the butterfly has migrant and vagrant tendencies, with individuals making it as far south as Melbourne. This tendency has only been noted in South Australia definitely once and possibly twice, as a specimen has been collected in the Coorong, and a possible specimen sighted at Whyalla.

Locally common in breeding areas in the northern Flinders Ranges where there is a resident population of the butterfly. Numbers of the butterfly tend to be more common about their hostplants during the warmer months.

The butterfly only utilises the tree caper as a hostplant in South Australia, and it is believed there is very little, if any self-propagation of this tree occurring, due to grazing animals (particularly feral rabbits) and insects, and the frequent droughts. Due to the use of a single hostplant that is mainly present in the northern Flinders Ranges as a sparsely occurring long lived tree, the early stages of this butterfly are very heavily kept in check by carnivorous and parasitoid insects (bugs and wasps) and spiders, and bacterial and virus diseases that are permanently resident on the hostplant. However, there is obviously a natural balance between numbers of the butterflies and the predators, as otherwise the butterfly would have long disappeared from the area as a replenishment of additional butterfly numbers by means of a migration are probably very infrequent.

Due to the poor self-propagation of the tree caper, an attempt should be made to revegetate the tree in suitable areas. It will require protection from both grazing animals and from the caterpillars of the Caper White butterfly while still in the immature thorny stage of growth. 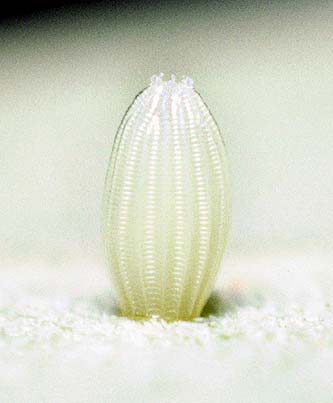 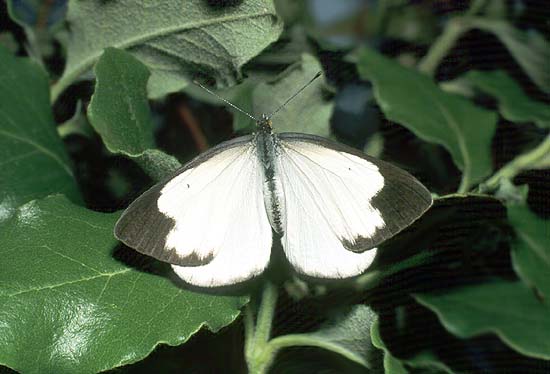 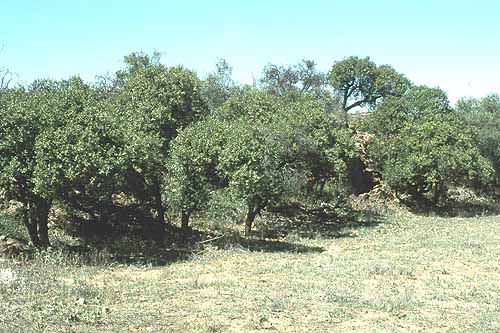 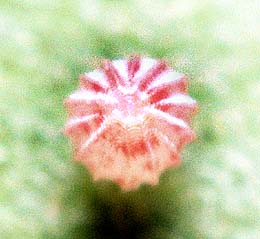 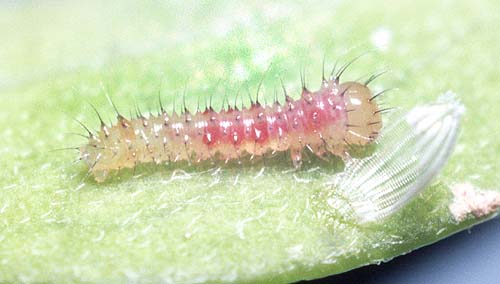