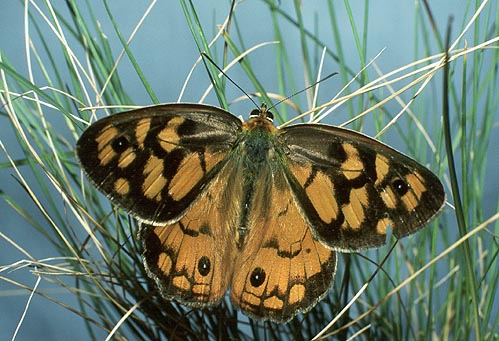 This butterfly belongs to a generic group of very interesting endemic satyrs.

It contains species such as the Bright Eyed Brown (Heteronympha cordace), which retains some very primitive characters, to the highly evolved Common Brown (Heteronympha merope). Although they all belong in the same genus, each species in the group has a number of unique but divergent morphologies. The Shouldered Brown is unique among satyrs in that during fertilisation, the female receives a sphragis plug from the male which prevents it from undertaking further mating with another male.

The sexes are of similar appearance, but males can be easily identified by the large grey, furry sex mark present on each forewing upperside, within the discal cell area. The large sex mark is also where the common name of Shouldered Brown derives, although a similar sex mark is found in the males of several other closely related Heteronympha species to be found in the eastern states. Like most satyrs, the wing undersides are cryptically camouflaged, and it is sometimes difficult to detect these butterflies when they are settled with wings closed and erect, owing to their close resemblance to the ground, or to dead leaf and plant debris.

The butterflies have an irregular, but swiftly elusive flight. When the males are few, they usually set up territories in open sunny areas within or around the edges of forest or woodland, where they rest with opened wings on a leaf or twig waiting for unfertilized females to fly by. More often it is other males, or the females of the Common Brown that happen by, and the male will pounce on either before quickly losing interest. When the males are more numerous, they will flutter about near ground level looking for newly emerged females, but when they tire of this, they will rest with wings open on the grass. In forest areas with dappled sun, it is possible to witness dozens of males all fluttering around in the rays of the sun. Males will also hilltop. The butterflies are extremely timid and wary, and difficult to approach. When startled, the males will fly off but will often return to their territory, whereas the females disappear into the depths of the forest. When disturbed early in the morning or late in the afternoon, this butterfly rapidly ascends high up into the tree canopy. The males are usually much more in evidence than the females. The latter tend to make an appearance in the middle of the day, when they undertake egg laying.

Small, pale yellowish white, shining, turbinate to subconical, expanding basally, base flattened, apex rounded, nearly smooth but with very fine, indistinct dimpling. The females lay eggs by fluttering close to the ground, then settle on some grass or stem and proceed to lay. They may attempt to lay eggs on the grass, but as the eggs have very poor adhesive properties they tend to immediately drop off. Most females just drop the eggs loose down into the base of the grass. The females have the potential to lay large quantities of eggs. One female in captivity once laid more than 300 eggs within a week before she got tired of it, with barely a reduction in abdomen size. The eggs start to develop as soon as they are laid, and hatch in about 17-19 days in mid-Autumn. Eggs may develop in 7-10 days if kept warm, while eggs laid in cold areas may take a month to develop. The presence of moisture will also sometimes hasten development. When ready to emerge, the larvae incompletely cut out a circular area at the top of the egg, leaving a small uncut portion, and then push the top out like a hinged lid. The larvae eat their egg shells on emergence.

Initially, pale greyish yellow, with sparse, long semi-translucent brownish hairs that have transparent knobs at their tips, and which are set on short, simple raised protuberant smooth bases. The hairs are slightly longer at the posterior end of the larva. The head is pale brown, very finely rugose, having short hairs with only the dorsal hairs being knobbed. The posterior end is not forked in the first instar. After eating the green leaves of the hostplant, the larvae turn green and acquire a dark dorsal line edged pale yellow, and pale yellowish subdorsal and lateral lines, and the head becomes dark brown.

The second and third instars are green. The long, knobbed hairs that are present on the first instar are lost in later instars, and the rear end becomes forked, typical for the Satyrinae. The body has a darker dorsal line, a pale subdorsal and lateral line, and the dorsal area is often paler than the lateral area. They are covered in short, simple spine-like setae set on white, simple raised protuberant smooth bases. By about the third instar, the lateral edge of the larvae becomes noticeably flanged. The head is finely rugose with some short spine like hairs, rounded, brown, with a darker brown frontal triangular mark edged pale brown. The forked tail is short,pale yellowish coloured, and is also covered in setae.

The fourth instars are either pale brown, greenish brown or green, with a dark brown or black dorsal line and other subdorsal lines, the head is brown, while the forked tail is pale brown.

The mature fifth instar larvae are cylindrical shaped, 27-32 mm long, being fatter in the middle, and the lateral edge is slightly flanged. Only brown larvae have been recorded. There is an unbroken dark brown or black dorsal line, and finer subdorsal dark lines, and there are other very fine speckled dark markings. The body is without long hairs, but bears numerous short pointed secondary setae imparting a rough scabrous appearance. The head is large, rugose and brown with numerous short hairs. The top of the head is rounded, without horns. The rear end is forked.

The immature larvae nibble the leaf edges of the hostplant, but later instars devour the entire leaf and also other soft green parts of the grass. Early instar larvae generally remain exposed on the hostplant, but third and later instars hide around the base of the hostplant during the day, coming out at night to feed. The latter larvae emerge soon after sunset to climb the hostplant, and move very slowly. If disturbed while feeding, the larvae will release their hold on the grass and drop to the ground, remaining rigid for some time in whatever position they were in at the time of the disturbance. If the grass has a few dead leaves, then both green and brown larvae are extremely well camouflaged on the hostplant and very difficult to detect. The larvae feed slowly through winter and spring, and pupation takes place in mid-summer.

Pale brown with darker brown or black cryptic markings, 15-17 mm long, short and fat, with a roughened surface, generally rounded anteriorly and posteriorly, although the head is wedge shaped anteriorly without horns, there is an indistinct thoracic keel, and the pupa is slightly ridged laterally at the thorax-wing junction, the wing joints are protuberant, and the cremaster is short and spinose. Pupation takes place either at the base of the hostplant in a silk lined cavity formed by the larvae, or on the ground where the pupation occurs beneath vegetation debris in a shallow larvae formed cavity in the soil loosely lined with silk. The pupae lie loose inside the cavity. The pupal duration is about 31-34 days in late summer.

Usually early February to late March, extending into early April during cool seasons. Only one brood a year. The males start to emerge earlier than the females. The flight of the females and the hatching of their eggs probably coincides with the drop in Autumn temperatures and the beginning of the Autumn rains that promote a new flush of growth in the larval hostplant grasses.

In South Australia, the butterfly only occurs in the Lower Southeast Region, south of Latitude 37° 30' (approximately a line through Millicent to Nangwarry). Historically, before the major native vegetation clearance occurred in the region, the butterfly may have extended further north in line with its distribution in western Victoria. The local subspecies of the butterfly is also found in similar habitat areas of Victoria, New South Wales and southern Queensland, and in elevated areas of the Great Dividing Range in central Queensland. There is some clinal variation in colour and pattern over its extended mainland range, but all mainland forms are now grouped under the nominate subspecies. Two other subspecies are found in Tasmania.

The butterfly occurs in shrubland, woodland and forest, in both open and closed habitat, which has some grass in the understorey that remains in a green condition all year round. It can sometimes be found in open coastal Poa poiformis grasslands. It only occurs in moist habitats receiving more than about 600 mm of annual rainfall. It is not as drought tolerant as Heteronympha merope, but is more tolerant of dry conditions than the other members of Heteronympha.

Local in distribution, sometimes common in its preferred habitat, but otherwise rare.

Bushfires, agricultural and forestry expansion are the main threats. State native forests in the Lower Southeast historically had their understorey burnt off on a short term rotational basis, which promoted the fire tolerant bracken to take over the forest understorey, to the exclusion of native grasses and other diverse native understorey vegetation.

Its hostplant is common and widespread, so the main strategy would be to keep toxic agricultural and forestry insecticides and weedicides away from conserved habitat, particularly those sprays distributed by aerial means. 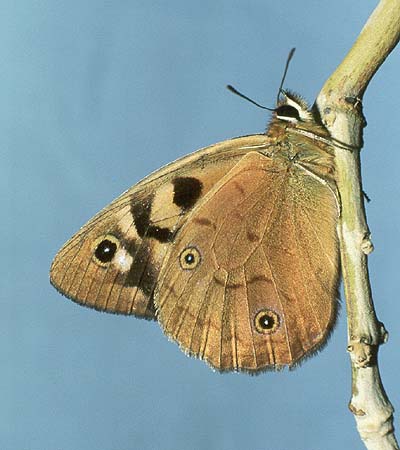