A pretty satyr, restricted to the South Mount Lofty Ranges in South Australia. It is a relict from probably the end of the last ice-age when the southern areas of South Australia were cooler and received a much higher rainfall. The sexes are similar in appearance, but can be readily distinguished by the prominent silvery sex brand present in each forewing of the males which occurs transversely across the centre of the wing upperside. Males will establish territories by perching on or near the ground in clear, sunny areas, waiting for newly emerged females. When fertile females are chased by males, they signal to the males that they are fertile by settling on the ground and fluttering their wings. This signal makes the males quickly lose interest.

The butterflies have an irregular flight, and prefer to settle on or near the ground. Like most satyrs, the wing undersides are cryptically camouflaged. It is difficult to detect these butterflies when they are settled with wings closed and erect, owing to their close resemblance to the ground, or to dead leaf and plant debris, particularly in dappled forest light. The butterflies are sometimes more common along the base of cool, shady rock faces where their camouflage is nearly perfect. On very hot days the butterflies will congregate together in cool, shady areas.

Usually a difficult butterfly to approach when settled as any quick movement or the least bit of noise will make it fly. If careful, it can be approached to within 1-2 m before it explodes away. Depending on the amount of scare, the butterfly will often only fly a short distance before settling again.

Small, initially pale yellow or white, turbinate (expanding basally), the base and apex are flat, moderately thick shelled, with well developed vertical ribs numbering 24-27, which do not extend onto the apical flattened area. The top flattened area is not rimmed with a ridge. Laid singly on dead twig and similar debris that is lying on the ground adjacent to the hostplant. If the egg is fertile it becomes purple speckled after a couple of days. Larva development within the egg usually commences immediately after being laid, and larvae begin to emerge in about 15 days. The empty egg shell is then eaten. (In captivity, most of the newly emergent larvae then become immobile. Some eventually move off to look for the hostplant, while the remainder stay put and would eventually die unless forcibly moved onto hostplant). However, some delayed egg development occurs, and some developed larvae remain inside the egg until wetted by rain. Some larvae do not emerge until late April, some two months after the eggs are laid.

Initially pale grey with fine longitudinal purplish brown lines, with numerous long pale hairs that emanate from black bases. These hairs are knobbed at the tips. The head is finely rugose, dark brownish black with some long hairs. In the first instar, the head is not horned and the rear end is only vestigially forked. After eating the green leaves of the hostplant, the larvae gradually turn green and acquire indistinct yellowish lines. The second instar is green with longitudinal yellow and dark green lines, the head is green and has a pair of vestigial conical horns, and the rear end has a short fork typical for the Satyrinae. The horns and forked tail are pink tipped. Later instars are either green or brown, and with successive instars, the body hairs are replaced by secondary setae, and the head acquires increasingly larger horns.

The mature larvae are long cylindrical shaped, tapering anteriorly and posteriorly, slightly flanged laterally, about 27-29 mm long, usually green coloured, with narrow yellow lateral and subdorsal lines, the latter edged with dark green, and there is a dark green dorsal line. The body is without long hairs, but bears numerous pointed secondary setae. The head is large, finely rugose with numerous short hairs, with a well developed pair of flattened pointed horns, green coloured with the perimeter of the head outlined in maroon which is further edged yellow posteriorly, and there is sometimes a pair of large dark maroon spots in the front just above the mouth. The rear end is forked, marked yellow laterally and the tips are pink. Brown larvae are occasionally seen, in which all the green colour is replaced by brown, with the dark aspects and yellow and pink markings remaining the same. These brown larvae presumably develop in response to a hostplant with many dead leaves.

The immature larvae nibble the leaf edges of the hostplant, but later instars devour the entire leaf and also other soft green parts of the grass. Early instar larvae remain exposed on the hostplant, but later instars hide around the base of the hostplant coming out at night to feed. The latter larvae emerge soon after sunset to climb the hostplant, and move very slowly. If disturbed while feeding, the larvae will release their hold on the grass and drop to the ground, remaining rigid for some time in whatever position they were in, at the time of the disturbance. They are extremely well camouflaged on the hostplant and very difficult to detect. The larvae feed throughout winter and pupation takes place in late spring and early summer.

Small, stout, about 13 mm long, with a roughened surface, rounded posteriorly, wedge shaped anteriorly with a pair of small horns, dorsally keeled, ridged laterally at the wing junction, and also dorsally across the abdomen. A few small protuberances ventrally. Usually green coloured, with some darker green markings, suffused yellow which is best developed ventrally, with six pairs of raised yellow subdorsal abdominal spots, the dorsal keel and the lateral and abdominal ridges are outlined with dark brown edged pale yellow, the yellow outline is strongly developed on the abdominal ridge. There is also a pair of raised black dots ventrally. As with the larvae, some pupae are brown coloured, in which the green colouration is replaced by brown. However, a few days before the butterfly emerges, a green pupa will turn brown as the butterfly inside the pupal shell develops its natural brown colour. First the wing cases turn brown, then later the head and thorax, and finally the abdomen. Brown larvae do not necessarily produce brown pupae. The pupa is suspended head downwards by a cremaster, either from the hostplant, or from a log, stick, rock or another plant adjacent to the hostplant. The pupa stage lasts about three weeks. Near Adelaide it is about 17-19 days during early summer.

The butterfly occurs only along the South Mount Lofty Ranges in the Adelaide Hills and along the west side of the Fleurieu Peninsula. Enigmatically, the butterfly does not occur on Kangaroo Island or in the Lower Southeast of the state where suitable habitat is present. The butterfly is much more common in the eastern mainland states of Australia where another subspecies occurs.

The butterfly occurs in cool, damp shady woodland and forest areas receiving more than about 600 mm of annual rainfall, and having its grass hostplant in the understorey remaining in a green condition all year round. Its original habitat (prior to the introduction of invasive grasses from overseas), was probably the Poa grasslands which require moist conditions.

Bushfires, drought, and urban and agricultural expansion are the main threats. As the habitat of the butterfly is now very limited, introduced woody weeds such as blackberry, boneseed, bridal creeper, broom and gorse also have the capacity to be a serious threat by choking off its hostplant and habitat.

Population numbers do not seem to have deteriorated over the past 30 years, and it is likely the butterfly is reasonably well protected in the conservation parks along the Mt Lofty Range. The introduced weeds will have to be monitored in its conserved habitat, and destroyed where necessary. 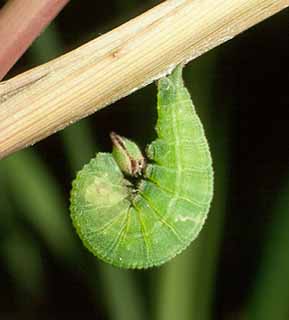 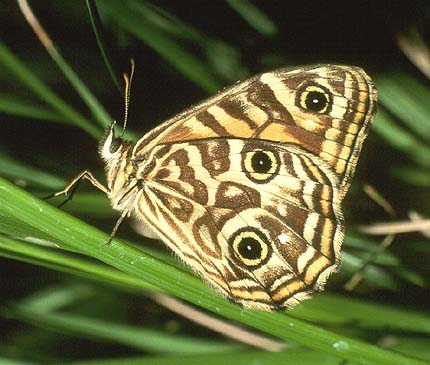 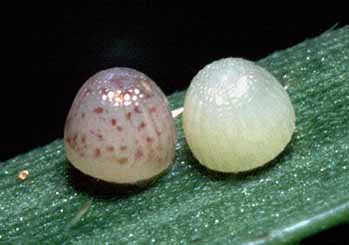 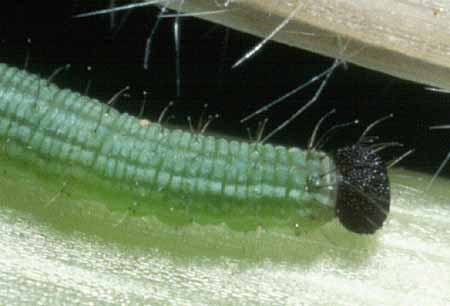 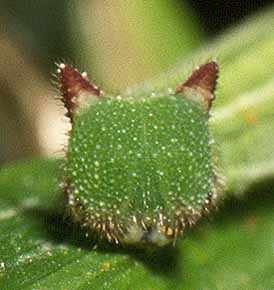 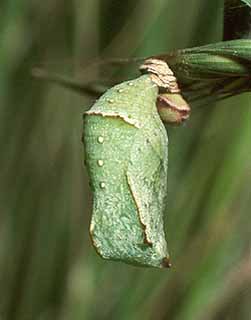