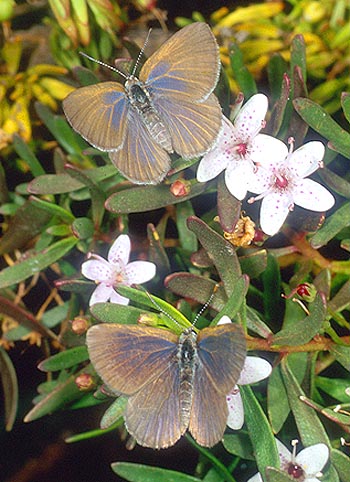 Another recently described butterfly. It had previously been incorporated with Candalides heathi but a re-examination of its morphological attributes and host plant preferences suggests that it is a distinct species. However, a future DNA analysis may ultimately show the butterfly is a local form of C. heathi. Its morphology is very similar to C. heathi but differs mainly by being darker and its colouration is more intense, and there is a prominent central black mark on the underside of each wing at the end of the discal cell. It is presently leading a tenuous relict existence in central western Victoria, 80 km east of the South Australian-Victorian border, where it is known to occur in only two small locations.

Similar habitat in which the butterfly is known to exist also occurs in the adjacent Southeast Region of South Australia. The butterfly has not been recorded from this type of habitat during other butterfly surveys although much of this habitat has been subject to degradation. More specific surveys in the future may be successful in finding this butterfly in SA

The early stages and their habits are reported to be very similar to C. heathi.

Known to only utilise Myoporum parvifolium (Creeping Boobialla) (Myoporaceae). The larvae eat the flower buds, flowers and softer green parts of the foodplants. This plant is prostrate growing and occurs naturally in wetland and spring seepage areas. The females will only lay eggs on plants growing in full sun.

The larvae have not been reported to be attended by ants, but may occcur in association with small Iridomyrmex ants.

Small, initially pale green, later turning white, hemispherical, top rounded, base flattened, with a coarsely reticulated, raised pattern which is continuous to the micropylar area. The reticulations are irregular, consisting of shapes varying from quadrangular to octagonal, the reticulation intersection being sometimes very slightly raised. Laid singly on the foodplant, usually on the calyx of flower buds and flowers, but also on the undersides of young leaves. The eggs hatch in about 6 days during early summer.

The final instar is about 14 mm long, green coloured with darker oblique dorsal markings and a yellow lateral line. Larvae remain exposed on the host plant.

The larva period is about 3-4 weeks in early summer, and requires 5 instars.

Have a shape typical for the Candalides tribe, about 10 mm long, roughly triangular in cross-section, and having a weak abdominal saw-tooth dorsal ridge. A divided blunt dorsal projection occurs on the thorax. The lateral part of the abdomen and anterior edge of the head is flattened, with the head flange either rounded or indistinctly divided at the front. Patterned in various shades of brown. Strongly attached by the cremaster and a central girdle to the silked substrate. Pupation occurs in dead organic litter within or around the base of the host plant and occasionally on the undersides of the stems of the host plant.

The pupa period is usually 10-12 months, but can be as short as 2 weeks. Pupae formed after or at the end of summer usually become dormant until the following spring and early summer.

There is one continuous flight from late August to March. The main flight is during spring that generally corresponds to the flowering and new growth spurts of the host plant, but a second brood can be completed in 6-7 weeks producing a lesser flight during late summer. Abnormal late summer rains can produce another vegetation spurt and a further short flight can occur during March from pupae produced during the previous generation. It overwinters as pupae.

Presently only known from two small sites 3 km apart in the Wimmera Region of western Victoria.

Within its known range, it is associated with its host plant where it grows in a 25 m wide strip adjacent to saline lakes in a temperate woodland area receiving annual rainfall of about 500 mm. The sites have been subject to periodic short term flooding that apparently have had no effect on the aestivating pupae.

Endangered. Only known from two small sites covering about 3 ha. Searches for additional colonies in similar nearby habitat have been unsuccessful.

Most of the lake systems and their adjacent grassland verges occurring in temperate farming areas were irreparably degraded very early in the days of European settlement. Clearing, bushfires, drought, and stock overgrazing and trampling would have made short work of this habitat. The adjacent areas are also prime areas for cereal growing and therefore potentially subject to aerial spray drift from poisonous sprays. Weeds and regenerating growth of the common wetland tree Melaleuca halmatuorum (South Australian Swamp Paper-bark) has the potential to choke the lakeside habitat, covering the host plant with dense shade and ultimately causing a permanent demise of the butterfly. (M. halmaturorum and M. parvifolium would have originally occurred together, but obviously in a situation conducive for the survival of the butterfly. Such conditions have now been permanently changed.) However some trees or high bushes may be necessary for utilisation by larvae to pupate as additional protection from the rises in the water level of the lakes during the infrequent wet years. Rabbits and other burrowing animals are known to damage the host plants in the breeding areas.

The known sites are presently both protected as conservation reserves. Additional land has been purchased in attempt to enlarge the potential breeding habitat and provide buffer zones. The habitat obviously needs to be cared for such that the above threats are reduced or eliminated. New sites may have to be located and an attempt made to translocate the butterfly so as to further reduce the possibility of extinction.

Information for this butterfly was provided from the original text of Braby and Douglas, 2004.