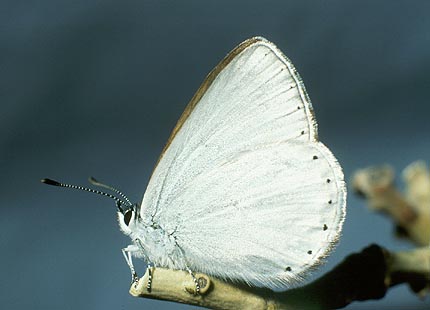 A pretty butterfly when freshly emerged, the veins on the wing uppersides (particularly in the males), are then noticeably highlighted with yellowish brown scales which give a rayed appearance to the wings and hence the common name. The underside is a uniform silvery white usually broken at the edges by a series of small black dots. The underside can sometimes be greyish or brownish in colder areas. The butterflies usually fly close to the ground with a reasonably fast irregular flight. Males will hilltop, but while some females remain near the foodplant, they more often tend to wander, looking for new areas of foodplant. When not feeding, males will rest with open wings either on or near the ground. Both sexes can be approached with ease when settled.

Like all Lycaenids, the sexes are sexually dimorphic in morphology on the wing uppersides. In this species the difference is very clear, with the males being uniformly copper coloured, while the females are grey with either broad blue or purple areas. The upperside colours quickly become dull after flight. There is some variation in the colour of the males. Most are coppery coloured on the uppersides with well defined rayed veins. Others are purplish coloured without the yellowish veins. Sometimes the underside row of small black dots are absent, or there may only be one black dot at the tornus.

The larvae are usually attended by a few small black ants Iridomyrmex species. In the extreme Far North of the state, where the larvae utilise Bluerod as a foodplant, the larvae are sometimes associated with the large black meat-ant Iridomyrmex viridiaeneus. The ants are not obligatory, and in the case of some small ants they will quickly disperse when danger threatens the larva.

Small, initially pale green, later turning white, hemispherical, top rounded, base flattened, with a coarsely reticulated, raised pattern which is continuous to the micropylar area. The reticulations are irregular, consisting of shapes varying from quadrangular to octagonal, with each reticulation intersection being slightly raised. Laid singly on the foodplant. On the flowering plants the egg is usually laid on the young leaves in the outer parts of the plant. On ribwort it is laid on either side of the leaves, on plants growing out in the open and uncongested by other plants and grasses. The females prefer to lay eggs on foodplants on which attendant ants occur. Near Adelaide, the eggs hatch in about 8 days during spring.

The first instar is initially pale yellow with some dark spots. After eating, it changes colour to greenish yellow. Onisciform shaped, with a dorsal thoracic furrow, and the head is large, smooth, yellowish green, hidden beneath the body. The posterior dorso-lateral organs are not developed. There are long dark dorsal setae, and long pale peripheral setae that are longest anteriorly and posteriorly. Dorsal setae occur in two pairs, one pair being long and recurved, the other pair being short, recumbent and directed to the rear.

Intermediate instars gradually lose (or outgrow) the long setae and acquire numerous tiny secondary setae, and the dorsal protuberances become more prominent. From the second instar, the dorso-lateral organs are prominent at the posterior end. The second instar is green with indistinct yellowish forward directed subdorsal chevron markings, and the dorsal protuberances are marked yellow. Thereafter, the larvae can acquire one of two colour schemes. They can either occur with or without dark red dorsal marks. The third (and fourth if required) instar stages are similarly coloured as the final instar. By the third instar each lateral edge of abdominal segment (AS) 8 becomes flattened and elongated with a protuberance.

Early instar larvae feed by scouring the leaf surface. On ribwort they normally feed on the undersides of the leaves and start by making an initial eat on the leaf surface, then move ahead making an irregular eating trail, leaving a trail of black sticky dung pellets in their wake. They only eat the lower cuticle of the leaves without eating through to the upperside, and when viewed from above a transparent track can be seen. Larger larvae devour the entire leaves of the foodplants, eating from their edges. Feeding can occur either during the day or more usually at night, and a larva is very immobile when feeding. When disturbed, the older larvae will quickly fall to the ground. The green larva colour provides good camouflage among the leaves and stems during the day. The location of larvae on a foodplant can sometimes be indicated by the presence of ants.

The final instar is about 15-20 mm long, elongated onisciform shaped with a weak thoracic dorsal furrow, the lateral edges are only slightly scalloped, the anterior end is squared, the posterior end is flattened and rounded, and there are some short peripheral hairs. There are prominent dorsal protuberances, paired on thoracic segments 2 and 3, but single on AS 1 to 6, with the summit of each protuberance having some short, dark bristly hairs. The lateral edge of AS 8 is flattened and elongated with a protuberance. The head is small, smooth, pale yellowish brown, hidden beneath the body. The body is covered in numerous, tiny, white coloured secondary setae having a protuberant,angular and ridged base, and a bent, central serrated spine that is club or elongate balloon shaped, flattened and set on a narrow stalk. The larvae are coloured in some shade of green or yellowish green, with an indistinct dark green longitudinal dorsal line, with pale forward directed subdorsal chevron markings and longitudinal subdorsal lines, and a pale yellow lateral line. Each dorsal protuberance is marked pale yellow. In some larvae the summit of the dorsal protuberances on AS 1, 2 and 6 are marked dark red, as are sometimes the lateral protuberances on AS 8.

The larva period is variable, being about 4-5 weeks in mid-summer, and can be completed in 4 or 5 instars.

Have a shape typical for the Candalides tribe, about 10-13 mm long, roughly triangular in cross-section, and having an abdominal saw-tooth dorsal ridge. A divided blunt dorsal projection occurs on the thorax. The lateral part of the abdomen and anterior edge of the head is flattened, with the head flange either rounded or indistinctly divided at the front. Patterned greenish yellow, brown and reddish pink at first, but later changing to various shades of brown or grey brown, and cryptically marked either weakly or strongly in dark brown and dark grey. The dorsal bifid projection is sometimes colour tipped off-white, and there are broken black markings along the abdominal dorsal ridge and lateral flange. The spiracles are conspicuously outlined with reddish brown.

Strongly attached by the cremaster and a central girdle to the silked substrate. Pupation occurs in dead leaf and other debris within or around the base of the host plant if it is small, or if the host is large then it may pupate within bark crevices of the trunk. In the case of ribwort, they will leave the plant and pupate on nearby trees, fence posts or beneath rocks. The pupa period is variable, being about 11-19 days in late spring and summer, but pupae formed after or at the end of summer usually become dormant until the following spring. Some pupae can even remain dormant until the subsequent season, with records of pupa periods up to 21 months.

In the southern temperate areas it flies during the warmer months from late August to March, where there is usually a peak emergence in early spring and again in late summer. In the Far North its flight extends into May. A brood can be completed in about 7-8 weeks in temperate areas. It overwinters as pupae in the south, while in the Far North it overwinters as both larvae and pupae as the development rate slows down due to the increased cold. In some inland areas the pupa dormancy is broken by rain.

Occurs throughout the temperate and subtropical latitudes of mainland Australia. Not yet recorded on Kangaroo Island, and is very rarely seen in the Southeast Region of South Australia where it is likely to be replaced by C. noelkeri. The butterfly tends to be more common in northern pastoral areas of the state than in the temperate agricultural areas in the south, although there is a stong population presence in the Adelaide Hills. There are alpine (thermoregulated) subspecies present in the eastern states.

Within its known range, it is usually found wherever its foodplants occur, and these are common and widespread, occurring in most habitats.

Generally considered to be a rare butterfly in flight, even though it is widespread in distribution. It used to be reasonably common along the grassy foothills of suburban Adelaide until urbanisation overtook its habitat. At irregular periods it is occasionally seen to be locally common in some breeding areas.

Bushfires, drought, and urban and agricultural expansion are the main threats, but as the butterfly utilises diverse foodplants occurring in most habitats throughout the state, the butterfly is believed not to be unduly threatened.

None required in pastoral areas as its Eremophila and Stemodia foodplants are generally considered to be unpalatable to stock. Along the Mt Lofty Range its principal foodplant is now the introduced weed ribwort. However, another foodplant the endangered Derwentia derwentiana (Derwent speedwell) could be considered for revegetation projects, which would help to conserve both butterfly and the plant. 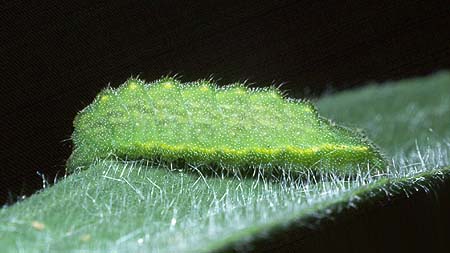