A small, brown skipper to be found in the tropical and subtropical areas of northern Australia. Both sexes are similar and have dull coloured wing uppersides, although the hindwing undersides are more colourful, being dull yellow with a series of yellow spots. Although these spots are of the same size on individual specimens, they do vary in size on different skippers depending on the population. Similarly, the presence or absence of spots on the hindwing-above is dependent on the individual.

The skipper was recently found to occur in the Far Northwest Region of South Australia. It is one of the few endemic skippers that have adapted to the inland arid areas of Australia. It belongs in a small tribal group of skippers that have characteristics similar to both the much larger Australian tribal groups of the Trapezitini and Hesperillini. Males tend to collect on dune-tops during periods of full-sun and will set up small territories in open areas near to the hostplants where they perch on dead twigs or similar debris near the ground. In that situation they will investigate all other flying butterflies, and even small birds that fly into their perceived territories. Females fly in host-plant areas, and have a slower flight when in an egg laying mode.

The early stages and habits are similar to its inland relative Croitana arenaria.

Various Triodia species. The only host-plant species growing within South Australia is T. pungens (resin or soft spinifex) (Poaceae), notable for its copious resin producing ability that aborigines used in the past. The larvae eat the leaves of the host-plants. The skipper is particularly partial to new growth on the host-plant, and skipper populations can briefly proliferate after fire due to host-plant regrowth, (provided the skipper populations in nearby areas have also not been destroyed by the fire). This spinifex is low growing and relatively soft and sticky to the touch, whereas other inland spinifex are large, tussocky, and more memorable for the potent pointed ends of their leaves that can quickly cripple any wayward adventurer entering into their domain.

Small, nearly hemispherical (domal) shaped, base flat circular, with 22-23 strong, faintly beaded vertical ribs, and indistinct horizontal inter-ridges. The small micropylar area on top of the egg is depressed. Pale yellow when newly laid. Laid singly on the leaves of the hostplants near its base. Eggs start to hatch after 6 days and the egg shell is eaten by the larva after its emergence.

The first instar is long cylindrical, initially pale yellow, with a large shining black head having a few long hairs, the neck (prothoracic plate) is black. After eating the empty eggshell the larva will move to near the tips of the leaves to form a small tubular shelter from two or more leaves.

New shelters are periodically constructed in the outer parts of the hostplant to fit the growing larvae, using 8-11 leaves in the final shelter utilized by the fourth and fifth instars. The shelter is narrow, long cylindrical, opening at the bottom that typifies this tribe of skippers, and the leaves are not twisted to form the shelter. Some of the leaves are eaten through at the base of the shelter to provide better larval access to the opening. The shelters are very strongly lined with silk. Larvae rest and hide from predators within the shelters during the day with their heads directed towards the base of the hostplant. The growth of the larvae is slow and the larval period has not been established but is believed to be up to 12 months and dependant on humidity and rainfall.

Pupation occurs in the final larval shelter on the hostplant, and the larva pupates head downwards, directed towards the base of the plant. The pupa is secured within the silk lined shelter by very strong hooked bristles emanating from the end of the cremaster. The pupal duration is about 12-14 days. The empty pupal case remains inside the shelter after the adult skipper emerges.

The skipper has been recorded flying throughout the year in tropical areas. Flight in the cooler southern areas of its range in Australia seems to peak during spring and again during the monsoon wet season (autumn), and is probably in response to warmth and rain with the latter promoting a blossoming of nectar plants required by the adults. In South Australia, males are the first to emerge during the spring flight.

The skipper occurs in tropical and subtropical latitude-areas where its spinifex host plants grow in adequate density. In South Australia the hostplant Triodia pungens only occurs in the Far Northwest Region of the state in the vicinity of Amata to Pipalyatjara and Iltur.

The hostplants are widely distributed and the skipper can be locally common when the habitat and conditions are favourable.

The main threats are from the effects of fire or extended drought. The spinifex is inedible to grazing animals and can regenerate from fire provided it is not too frequent.

None required. Burnoffs should be local so as not to destroy too large an area such that skipper populations cannot recover in fragmented habitat areas. 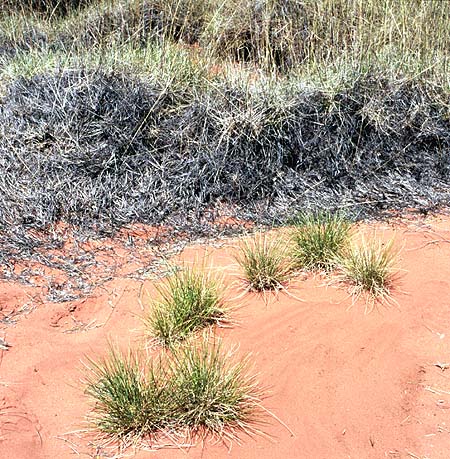 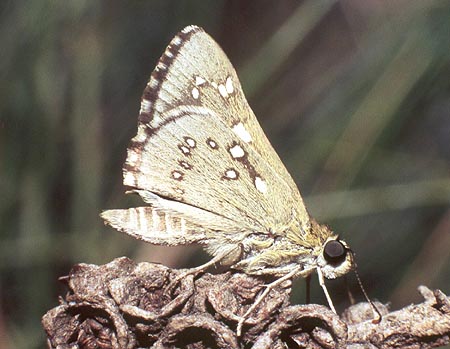 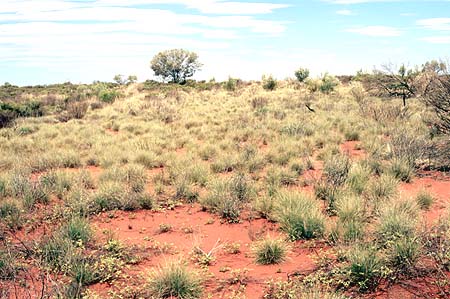