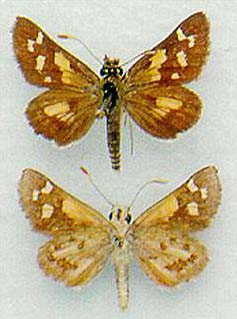 This species occurs in central Australia along with Croitana arenaria arenaria. Both species have similar wing morphologies, but recent studies indicate C. aestiva larvae utilize a different grass host, and surprisingly the larva-pupa shelter opens at the leaf-tip end. Its primary means of morphology differentiation is by the pattern differences of the yellow markings on the hindwing underside. The central pale yellow band is poorly developed in C. aestiva and does not have a 'double prong' outer margin to the most prominent central part of the band, whereas in C. arenaria arenaria a double pronged margin is usually developed at the prominent part.

It is a pretty skipper, which flies in rocky areas and has a rapid flight. It spends a lot of time in the morning or late afternoons feeding from small flowers, with 14 species of nectar plants documented.Males will patrol amongst its larval host plants during late morning, looking for newly emerged females. From midday to early afternoon they tend to hill-top near the host-grasses and set up small lek territories on small patches of bare ground or large rocks, and also low bare sticks or similar, typical of many skipper species including the related Proeidosa polysema. They are very well camouflaged when settled on the ground. The males will periodically fly off to either patrol nearby areas looking for new females, or to chase off other males. Females commonly fly in host grass areas, and have a slower flight when in an egg laying mode, and will periodically land on the host grass to lay eggs or sun themselves. The skipper is timid, but can be approached with care when settled, especially when feeding at flowers, although once in full flight they are very quickly lost to sight due to their rapid flight.

It is possibly a very 'ancient' species having adapted itself to a unique hostgrass and habitat in the west MacDonnell Ranges that has not changed very much for 30 million years.

Neurachne tenuifolia (mulga-grass) (Poaceae). This grass has a tussock habit with low, basal involute filiform leaves, but long erect flower stalks. The larvae eat the leaves of the hostplant.

Small, slightly hemi-ellipsoid, 21-29 prominent vertical ribs, with indistinct cross ridges, the small micropylar area on top of the egg is depressed. Pale yellow when newly laid, and the eggs do not later acquire red markings if fertile. Laid singly on the leaves of the hostplant, although with successive layings (by the same or different females) more eggs may occur on a single blade of grass. Up to 25 eggs have been recorded on a single plant. Green or dead leaves are used for laying, although the former are preferred. Eggs are laid on the convex surface of the leaf, in the outer half, and the base of the egg will wrap itself around the stalk during the hardening stage of the egg, similar to that of its sister species Herimosa albovenata. Larvae start to hatch (eclose) after 8 days. The egg shell is eaten by the larva after its emergence.

The first instar is long cylindrical, initially entirely pale yellow but gradually turn green after eating the hostplant, with a large pitted very dark brown head having some long hairs, the neck (prothoracic plate) is brown, and long recurved hairs occur posteriorly. After eating the empty egg shell the larva will move basally to the cavity area of the ligule-sheath attachment area of the leaf to the stalk, nearer the base of the plant to make its initial shelter. The young larva rests in the shelter during the day with its head pointing upwards towards the leaf tip. The larva eats nocturnally by feeding on the edges of the leaf.

Subsequent instars are similar to C. arenaria and gradually acquire pale and dark longitudinal lines and lose the long posterior hairs, the head gradually becomes paler and gets a brown frontal marking and eventually by about the fourth instar acquires the head pattern for the final (fifth) instar larva. New shelters are periodically constructed to fit the growing larvae, by using the basal parts of the leaves and stalks of the hostplant, and the internal diameter of the shelters is almost an exact fit to the diameter of the larvae. The shelters are open at the top (towards the leaf tips) and sealed with silk at the base, which is unique for this tribe of skippers. Larvae emerge from the shelters to eat leaves at night.

The final instar is long cylindrical shaped, about 16-22 mm long, and very similar to C. arenaria.

This skipper has developed survival means to overcome the periodic extended dry periods of Central Australia, and which is another feature common to the tribe of skippers in which this skipper is a member. Its mature larvae can enter into a dormant diapause condition when the hostplant grass becomes too dry or rank to eat. These larvae can diapause during the dryer months until the rain occurs. They then break diapause to feed slowly on the rejuvenated green growth of their hostplants until their pupation.

The presence of larvae on the hostplant is discernible by the characteristic long (up to 5 cm long), shallow, jagged sawtooth-like edges to the leaves.

Similar to C. arenaria about 16 mm long. Pupation occurs in the final larval shelter on the hostplant, and the larva pupates head upwards, directed towards the leaf tips. The pupa is secured within the silk lined shelter by very strong hooked bristles emanating from the end of the cremaster. The pupal duration has not been documented. The empty pupal case remains inside the shelter after the adult skipper emerges, and is brown coloured.

Known to fly from mid September to late April. The fight is likely opportunistic dependant on the infrequent rains that occur in Central Australia, but primarily on heavy monsoon thunderstorms during late spring to autumn that promote rejuvenated growth of the perennial hostplant grasses. This would lead to a split flight period based on the winter and monsoonal rain periods. Good winter rains would promote an early spring flight, while good monsoon rains would promote a late summer-autumn flight. The brood period has not been documented. Observations during the hot summer months show that the early stages of the skipper are present on the hostplants in all stages of development. The skipper overwinters as larvae.

Presently only recorded from Central Australia in rocky hill habitat of the west MacDonnell Ranges where its foodplant grass Neurachne tenuifolia (mulga-grass) occurs. However, a similar species Neurachne munroi (dwarf or slender-headed mulga-grass) also occurs in Central Australia and northern South Australia in similar habitat, and it is possible that with further research it may be found that the skipper could also utilise this grass.

Presently, the distribution of the hostplant Neurachne tenuifolia is believed restricted to Central Australia in rocky hill habitat of the west MacDonnell Ranges. The skipper tends to fly in the higher parts of the ranges, suggesting it prefers the cooler parts of its habitat, in particular the south side of the ranges where the hot sun would have less direct affect on both the skipper and the hostplants.

Due to sparse records, it was initially believed to be endangered. With more surveys, new information suggest the skipper is very local in its status.

The main threats for the skipper would be extended drought and the effects of pastoral disturbances through over-grazing and trampling by animals, and the occurrence of grass fires. Although the grass can regenerate from fire provided it is not too frequent, the skipper early stages would be killed.

The hostplants seem to have a restricted distribution and growth density, and consequently require protection. Remaining remnant areas of pristine native vegetation containing the hostplants need to be protected or not be unecessarily cleared or burnt off. Feral grazing animals would need to be kept under control.