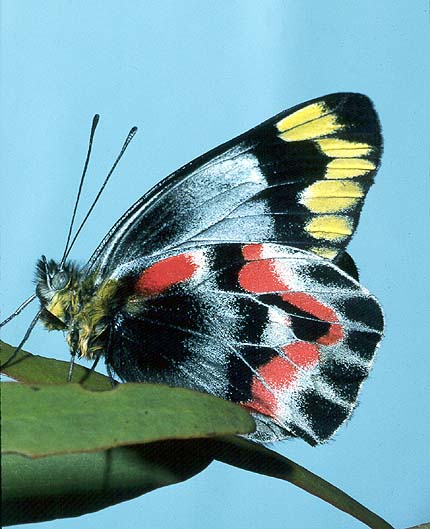 This large, beautiful butterfly has yet to be recorded from South Australia but does occur in western Victoria and it is possible it may eventually be found in SA.

The butterfly belongs to a very large generic group of migratory butterflies (believed to number more than 170 individual species that are centred in Papua New Guinea-West Irian) within which the included butterflies and their early stages are poisonous to varying degrees, forming a Mullerian mimicry complex amongst themselves (mutualistic resemblance in which all the species are unpalatable). To a lesser extent, they also form poisonous models for other mimetic butterflies (Batesian mimicry), but not anywhere near to the same degree as occurs in the Heliconiids of the tropical Americas. The early stages remain exposed on the hostplants, and have characteristic shape and colour, and pupae colour markings, usually a bright yellow or orange warning (aposematic) colour. Members of the Delias generic group are well developed in the tropical Asia and Australian Regions and are closely related to similar Pierids in the tropical Americas and Africa that also have parasitic larval hostplants. Even though the Delias butterflies are centred in distribution within the tropics, they usually occur in cool elevated areas, and within Australia at least are also commonly encountered flying during the winter months.

The Delias butterflies obtain their toxic properties through their parasitic hostplants, and these toxins include butyric acids and polypeptides. The entire life history of these butterflies is poisonous, to varying degrees. Their hostplants contain poisons, which the larvae are able to assimilate and retain in their bodies as a protection against vertebrate predation.These toxins are then transferred via the pupae to the adult butterflies. The poisons are passed onto the eggs by the female to complete the cycle. These poisons are usually in sufficient concentrations to only sicken the vertebrate predators, so that they can both learn from the experience and pass on the knowledge. The poisons are not meant to cause death as this would likely result in larger numbers of the butterflies being predated.

The non-poisonous mimic butterflies gain protection from animal and bird predators due to their similarity to the poisonous model. To retain the non-predation protection the mimic butterflies have to remain in low numbers. In the case of the Mullerian complexes, if there are plentiful poisonous species of butterflies around then it does not become critical if some of them are critically maimed by predators, which usually spit the butterflies out once they have had a taste of the butterfly. The Delias advertise the presence of their body poisons with their aposematic warning colours, which are bright red and/or yellow spotting of the wing undersides, on a background colour of black and/or white. They often have a slow flight so that they can be easily recognised by bird predators, although when migrating their flight can be rapid and direct.

Delias harpalyce has such a slow graceful gliding flight, but if disturbed can make off with great speed. The butterfly is readily visible in flight. The butterfly is intolerant of heat and will only fly when it is cool. Males are usually seen hill topping on a prominent hilltop in a breeding area during the mornings, where small groups can be seen slowly flying and gliding, waiting for newly emerged females to arrive. The males will disperse as soon as the midday heat arrives. The females are usually seen slowly flying about the hostplants where they can be easily approached if the hostplant is low growing. However, they are usually high canopy flyers and binoculars are then needed for recognition.

Both sexes have similar coloured undersides, that are distinctly different from Delias aganippe, which might also fly with D. harpalyce on hilltops. However, in flight the two butterflies can appear similar. They can be differentiated in that D. harpalyce appears slightly larger in flight and tend to fly within or just above the canopy. On the undersides the red postmedian band appears continuous in D. harpalyce, but is broken in D. aganippe, and the pale coloured area of the inner half of the wing along with the large black basal area is very distinctive in D. aganippe. The hindwing underside does not normally have any yellow colour in D. harpalyce, whereas D. aganippe does have some yellow markings. However, there are aberrant D. harpalyce in which the red markings are replaced by yellow. The uppersides are white coloured in males but dark grey coloured in females, which is the reverse to be found with Delias aganippe. The ark grey colour of the females make them very distinctive in flight.

All Delias butterflies are beautiful and have bright colour patterns, and are eagerly sort after by butterfly collectors.

Yellow when first laid, turning orange as they develop, spindle shaped with the height about twice the diameter, the lower half tapering slightly to a flat base, the upper half tapering more strongly, with coarse vertical ribs numbering about 16 most of which continue to the top of the egg and then enlarge to produce a white coloured rosette pattern when viewed from above. There are also indistinct, fine horizontal ribs. The eggs are covered in sticky material, which also makes the eggs adhere strongly to the substrate. Usually laid in batches on the leaves of the hostplant, with the numbers produced depending on the time the female has to lay the eggs without being disturbed. A batch of 105 eggs is known from near Melbourne. The egg laying capacity of individual females is not known. The eggs hatch in 20 days during mid spring in Canberra.

The first instar is initially orange coloured after emerging from the egg. The newly emerged larvae eat the upper portion of their eggshells first, then will move off the egg to eat whatever the eggs were attached to. The first instar larvae gradually become greenish as they feed on the hostplant.

The immature larvae feed gregariously, scouring the leaf surface and stem cuticle. The larvae produce a loose communal web on the hostplant which they adhere to very strongly when resting. One such cluster was reported to contain 70 larvae.

Final instar larvae are long cylindrical shaped, about 43 mm long, the skin is mostly a shiny red-brown to dark brownish black colour. Each segment has four long white hairs set on a prominently raised simple white coloured base.There is a large amount of short, intersegmental and lateralfurry-like white hair that are not set on prominent bases. The head is black, shiny, with short and long white hairs.

Older larvae feed independently and will devour whole leaves, young stems and sometimes flowers. They feed openly during the day, and return to the loose communal web to cluster when finished eating. When disturbed, older larvae also tend to regurgitate a bright green liquid, which they quickly spread onto any intruder. The larval duration is about 4-8 weeks during the warmer months, but is dependant on the average day heat.

Angular elongate typical for the subfamily, about 28-29 mm long, very glossy, initially reddish orange, later turning to orange or black. The head of the pupa has a prominent, dorsally recurved anterior projection that is strongly divided in the outer half, there is a short pair of dorsal protuberances above the head, the thorax is dorsally keeled, there are four pairs of prominent pointed dorsolateral antero-abdominal projections, the wing bases are protuberant, and there is a series of at least six very prominent, pointed dorso-abdominal projections. In orange pupae the thoracic keel, spiracles and the projections are black coloured, and there are a series of yellowish subdorsal spots in the positions where the long white hairs were present on the larva. The cremaster is wide and strongly developed. The proboscis (on the ventral side of the pupa) does not extend beyond the wing areas along the abdomen, differing from most other members of the subfamily. Attached to the substrate by the cremaster and a central girdle. The pupation position occurs with the head usually pointing upwards. The cause of the different coloured pupae is believed to be for thermoregulation use.

Pupation takes place either in gregarious groups or it is dispersed, and usually occurs on the mistletoe or adjacent mistletoe host. Sometimes if the hostplant is small, the larvae will leave the hostplant or mistletoe host altogether and pupate on nearby objects or other trees and bushes. Some of these larvae will leave the hostplant by descending on a silken thread. In winter the larvae construct on the hostplant, a large, white, communal silken web on which they pupate gregariously. The pupal period is about 3-4 weeks in summer, to 10-11 weeks in winter, but is dependant on the average day heat.

There are flight records for all months, that are least abundant during winter (but which may be a recording artefact). There are at least two annual broods with the main emergence times in early spring and late summer, and in some areas there may be an autumn brood. The brood period is dependant on location and time of year. A summer brood can be completed in 9-10 weeks in favourable habitat areas of Victoria, whereas it takes 15 weeks in Canberra for the same brood. Population numbers tend to vary year to year, possibly as a result of parasitisation and virus epidemics. Abnormally hot spells can deplete summer brood numbers.

The butterfly occurs in cool temperate areas of southeast mainland Australia. The butterfly has some vagrant tendencies and adults are sometimes seen in more inland areas, such as in northwest Victoria within mallee habitat, far removed from the normal breeding areas. It has yet to be recorded from South Australia but does occur in adjacent western Victoria and has been recorded as vagrants 90 km east of the SA-Victorian border. There are breeding colonies in the Grampians. Periodic vagrants could possibly occur in the Southeast Region of SA. Suitable breeding habitat probably once occurred on Mt Gambier and Mt Burr in SA, but these mounts were historically fragmented, cleared and degraded.

Its breeding habitat is cool, damp (receiving more than about 600 mm of annual rainfall), shady, temperate forest areas below about 800 m, being restricted by the cold tolerance limits of its mistletoe hostplants. However, it is not a montane species and is very rarely recorded flying above 1000 m. The hostplants are common species and the butterfly will remain in an area of colonised hostplant if left undisturbed.

A locally common butterfly in NSW and Victoria when the habitat and conditions are favourable. Population numbers fluctuate.

Urbanisation, agricultural activities and forest fires are likely to be the main threats. Early stages are susceptible to parasitoids, viruses and bacterial infections.

There may be enough native vegetation on Mt Gambier (revegetated) and Mt Burr (preserved) to attempt a translocation.