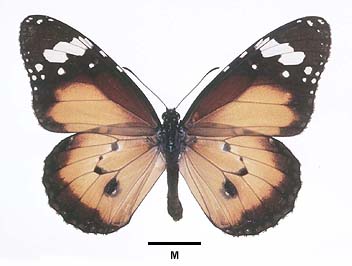 Both sexes are similar, but males can be distinguished by the presence of a single, small raised black sex pouch in the lower-centre of each hindwing. The males also have a pair of grey "hairpencils" enclosed near the tip of their abdomens, which they can protrude and expand into a feathery like mop and dispense a characteristic scented pheromone, which is required for successful courtship. The butterfly is a strong migrant and vagrant, and although it does not seem to have the ocean spanning flight of the similar, but more robust Wanderer (Danaus plexippus) of American origin, it has managed to disperse itself into most of the hotter parts of the eastern Hemisphere and there are similar butterflies in the Americas that have very close, past evolutionary connections. Massed migratory flights have not been observed in South Australia, although strong vagrant directional flights of the odd butterfly have been seen, where they were observed flying in southerly directions. The occasional large population increases in southern settled areas are probably the result of such flights. In southern areas it usually has a more active flight than the Wanderer and is easily startled and will make off with great speed. In the Far North Region of the state the flight is more graceful and slower, typical for poisonous species of butterflies, which gives predatory birds sufficient time for recognition. The bright brownish-orange colour of the butterfly is also a readily visible colour. The butterfly is also locally common in the hot tropics where it will occur in massed aggregates along shady creek lines.

Populations in the Far North are probably nomadic, building up in numbers during the rainy periods as its hostplants flourish, then dispersing as it dries out. They tend to be more commonly seen feeding at flowers in this region, or just milling about in the shade. They probably start moving south as the southern areas start to warm up in spring. In the southern areas the populations are more transitory, and the butterflies always seem to be on the move. In some years it occurs with the Wanderer in southern settled areas, and the larvae of both species can sometimes be found together on the one hostplant. It is usually the Wanderer that is the more common butterfly in these situations.

The entire life history of the butterfly is poisonous, in varying degrees. Their larval milkweed hostplants often contain poisons, which the larva is able to isolate and retain in its body as a protection against vertebrate predation. These poisons can be passed on to the pupa and the adult butterfly. The latter can further top up its poisons by imbibing (sucking and assimilating) the sap and surface exudates from the hostplant again, or from other poisonous plants. From the latter the male butterfly obtains further poisons (pyrrolizidine alkaloids), which are necessary for the production of the hair-pencil pheromones. The pyrrolizidine poisons are also emitted as a defence mechanism through the hair-pencils when the male butterfly is attacked, or even when it is roughly man handled. The cardiac glycoside poisons are passed onto the eggs by the female to complete the cycle. These poisons are usually in sufficient concentrations to only sicken the vertebrate predators or at least taste unpalatable, so that the predators can learn from the experience and pass on the mistake. They are not meant to cause death as this would likely result in larger numbers of the insect being killed.

The butterfly is sometimes given full species status as Danaus petilia but this is not supported by DNA studies.

*Asclepias curassavica (red-head cotton-bush), *Gomphocarpus (Asclepias) fruticosus (swan plant), *G. physocarpus (balloon cotton-bush), *G. cancellatus (rotundifolia) (broad-leaved cotton-bush), *Calotropis spp incl. *C. procera (king's crown), Cynanchum species including C. floribundum (desert cynanchum or native pear), Marsdenia (Leichhardtia) australis (native pear), Rhyncharrhena (Pentatropis) linearis (bush bean or cotton vine), *Orbea (Stapelia) variegata (carrion flower), Sarcostemma spp (Asclepiadaceae). The toxicity of each plant species varies. The poisonous properties of the introduced milk-weeds from Africa and the Americas are cardiac glycosides (cardenolide heart poisons). The poisonous properties of native milkweeds are not well known, but appear to be different to the introduced species. Marsdenia poisons include alkaloids, while Sarcostemma poisons include saponic and steroidal glycosides. The larvae prefer to eat the leaves of the hostplant, but if the larvae are numerous they will eat all the softer parts of the plant, including flowers and the immature fruiting capsules. Around Adelaide, Gomphocarpus cancellatus and G. fruticosus are the main hostplants, and it is usually the former which is preferred, and the first to be attacked if both plants are growing together.

Initially pale yellow, later becoming white. Subconical elongate, about one and a half times as high as wide, bluntly pointed apically, flattened basally, finely ribbed vertically with about 20-22 ribs, and with numerous indistinct lateral ridges. The egg pits are rectangular shaped. Laid singly, usually on the undersides of the hostplant leaves, but sometimes on other softer parts of the plant. The eggs hatch in about 5 days. The larvae eat the egg shell before proceeding to eat other parts of the hostplant. In the southern temperate areas the females usually visit the hostplants in a transitory mode, laying eggs and then moving on.

Initially brownish grey-white, with a few short black hairs that are more common posteriorly. A pair of black patches occur behind the head on the prothoracic plate, and another black patch occurs dorsally at the posterior end on the anal plate. The head is black and shining with a few short black hairs. A pair of brown fleshy protuberances occur behind the prothoracic plate, and again about a third the way from the head (second abdominal segment), and at the posterior end. After eating the hostplant, the larva turns pale greyish white and acquires ten dorsal transverse black bands with paired large yellow spots. Subsequent instars acquire the typical bright warning colours of white, yellow and black to the body and head. The fleshy protuberances become progressively longer with each instar, developing into flexible fleshy black spines or filaments.

Initially the larvae feed by scouring the leaf surface, avoiding the major veins as puncturing the latter would cause a flow of the milky-white sticky sap, which may engulf the larva and disable it. Older larvae will eat the entire leaf and if hungry enough, also other soft parts of the hostplant. They feed openly during the day, with their bright warning colours affording them protection against bird predators. When strongly handled or attacked, the larva will regurgitate a fluid which is much more poisonous than the rest of its body. The larva will swing its head about in an attempt to spread the poisonous regurgitant onto the predator. Like many other butterfly species, the older heavier larvae silk the leaf to the stem in case the leaf should accidentally detach with them still upon it.

The final instar is about 38 mm long, essentially smooth, but with a few very small spinose secondary setae. Black beneath, mostly white above with ten broad black transverse dorsal bands which are constricted laterally, and which contain a dorsal pair of large transversely elongated yellow spots. These bands are separated by three finer bands of black, which are discontinuous laterally. The lateral white areas are daubed with yellow, and there are additional large white spots sublaterally and on the sides of most of the legs. There is a long pair of flexible, black, slightly bristly, fleshy tentacular spines or sensory filaments behind the prothoracic plate, and there are further shorter pairs on the second abdominal segment and at the posterior end. The basal part of the filaments is sometimes coloured bright red. The head is smooth, rounded, black, edged white, with a few short black hairs, and there is a white inverted frontal V mark with a further white triangular shaped spot inside the V, and the mouth is white. The larval duration is about 18 days.

Large, stout, mostly smooth, about 20 mm long (including the cremaster), the posterior end is rounded and slightly rugose, and ends in a short black cremaster. Rounded anteriorly, but with a pair of apical protuberances, the wing bases are slightly protuberant, and there is a finely beaded slightly raised transverse ridge dorsally on the abdomen. Polymorphic coloured, either pale green, bluish-green, pink or yellowish-brown. After pupation there is a series of paired dorsal yellow marks, and the abdomen is marked yellow laterally, but these yellow marks are lost after a couple of days. There are also five pairs of shining golden spots, on the thorax (two pairs), at the wing bases, on the anterior protuberances, and ventrally. The transverse dorsal abdominal ridge is outlined in gold, edged black anteriorly. There is a long, black, inverted V shaped mark emanating abdominally from the cremaster.

The mature larvae usually leave the hostplant to pupate, sometimes travelling a great distance before stopping. This trait is probably a necessity as later larvae may completely denude the hostplant of the leaves necessary for pupal camouflage, or at worst may snip off the pupal attachment causing the pupa to fall to the ground to be subject to predation or cooking on the hot exposed earth. During this exodus larvae may be predated upon by ants, the contained toxins within the larvae apparently having no undue effect upon the ants. However the larvae are not attacked by the same ants while the larvae are feeding on the hostplant. Those larvae which remain on the hostplant to pupate are often diseased or parasitized.

The pupa is suspended head downwards by the cremaster, usually in a leafy situation which provides camouflage. The pupal stage lasts about 15 days. If the pupation medium is a potentially deciduous leaf, then the larva will make sure the leaf remains secure for the duration of the pupal period by spinning silk between the base of the leaf and the stem. The pupal colour is not necessarily camouflage dependent, as pink pupae can also occur in green leafy environments. The usual pupae colour around Adelaide is pale green, and both green and pink types can occur together. In other parts of the world the pink pupae can be dominant.

It is possible to find flying butterflies throughout the year in the Far North. In the temperate south of the state, the butterfly is more transitory, and can be seen at various times during the warmer months depending on whether the butterfly is an immigrant or occurs in a semi-established population. It is usually more common in the south during late summer and autumn. During the southern winter months, it can occasionally be seen with overwintering populations of the Wanderer in the frost free maritime coastal areas. These butterflies, similar to the Wanderer, presumably have large fat reserves. Early stage development ceases below about 12 degrees C. The brood period is highly temperature dependent, being 4-6 weeks during the warmer months in the temperate south.

The butterfly is a vagrant and can occur throughout Australia, including Kangaroo Island and Tasmania. It sometimes occurs at great distances from its hostplant. It hasan extensive distribution outside of Australia that includes much of the hotter parts of the eastern Hemisphere, and occurs as various subspecies and forms. 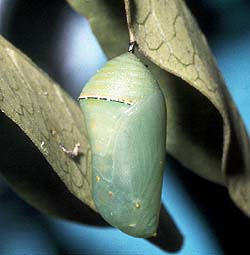 Pupae of the Lesser Wanderer 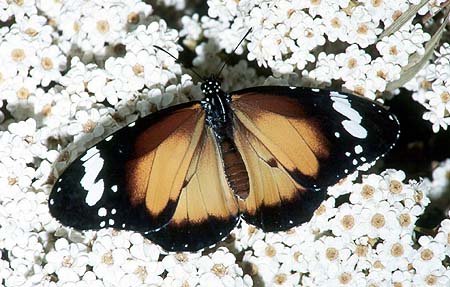 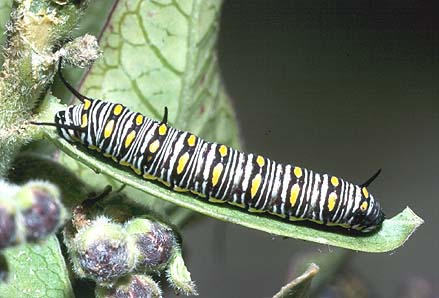 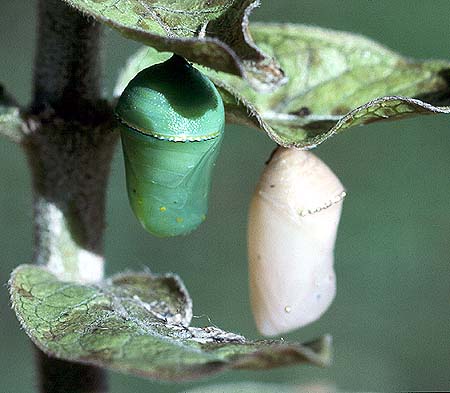