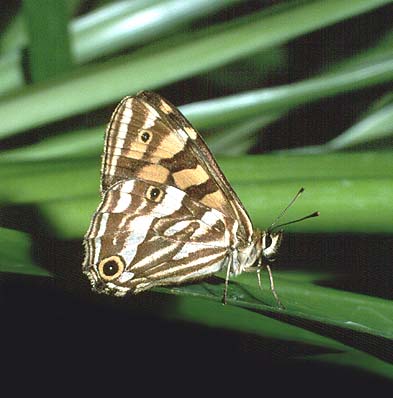 A small satyr that belongs to the Oreixenica generic group of highly picturesque Xenica butterflies. It is now very rarely seen in South Australia, where it occurs in the drained and fragmented silky tea-tree (Leptospermum lanigerum) and Gahnia clarkei wetlands in the extreme southern parts of the Lower Southeast Region. Males are usually seen sunning themselves with wings spread open on the tea-tree, while the females tend to occur near ground level as they flit over the Poa grasses beneath the tea-trees looking for places to lay eggs. The sexes are similar in appearance, and difficult to tell apart, although the males have an indistinct, irregular black sex-mark of specialised scales in each forewing upperside, extending transversely about halfway across the centre of the wing from the inner margin. Females have much larger abdomens due to the eggs they are carrying.

The butterflies have a fairly quick, but irregular flight. The bright silvery-white underside markings make this butterfly conspicuous when settled, but when in flight the markings provide good camouflage for the butterflies as they flit in and out of shadow and sunlit areas, and they very quickly melt from sight.

The butterflies are reasonably timid, but can usually be approachedwith care. If disturbed they fly up to a higher vantage point on some wetland shrub, or at other times they will fly off into the tea-tree thickets where they quickly become lost to view. In central and east Victoria, where the butterfly is more common, large clusters of these butterflies sometimes aggregate for the night on the under-storey grasses.

Small, pale green, thin shelled, nearly spherical, flattened basally, smooth and shiny but with a series of very fine, indistinct vertical ridges. Usually laid singly on the hostplant, or sometimes on other plants or debris adjacent to the hostplant. Larval development within the egg commences immediately after being laid, and larvae begin to emerge in about 13 days in summer increasing to 17 days in early autumn. When ready to emerge, the larva incompletely cuts out a circular area at the top of the egg, leaving a small uncut portion, and then pushes the top out like a hinged lid. The egg shell is then usually eaten by the larva.

Initially pale yellow with prominent black spiracles. The head is large, finely rugose, rounded, pale yellowish brown, with some short dark hairs. There are also some short dark hairs on the body which are longer posteriorly. The hairs arise from a short, simple raised protuberant smooth base. In the first instar the rear end is not forked. After eating the green leaves of the hostplant, the larvae gradually turn green and acquire indistinct pale, longitudinal subdorsal and lateral lines, and the head becomes noticeably pale brown. Feeding normally occurs at night, and initially the larvae will usually remain on the hostplant near where they eat, often covering themselves with the remains of their dung pellets. However, some larvae will move around, particularly towards the base of the hostplant, moving back up to the outer parts of the hostplant at night to feed.

The subsequent intermediate instars are pale green with a darker longitudinal dorsal line, and paler subdorsal and lateral lines, the head is green without horns, and the rear end has a short fork typical for the Satyrinae. The forked tail is brownish or pinkish tipped.

The mature larvae are long cylindrical shaped, tapering anteriorly and posteriorly, slightly flanged laterally, about22 mm long. They occur as various colour polymorphs, being either pale green, greenish brown, brown or pale whitish brown. Green larvae have narrow pale yellowish lateral and subdorsal lines, the latter continuous with the tail, and there is a dark green dorsal line edged pale yellowish. The body and head are without long hairs, but bear numerous pointed secondary setae that are set on simple, protuberant bases. The head is large, very finely rugose, rounded (without horns), green coloured, pinkish on top, and there is a very narrow pale-yellow vertical line along the side of the head. The rear end has a short fork, yellowish, with the tips pink coloured. In the brown coloured larvae the green colour is replaced by brown or greenish brown, with the dark aspects and yellow and pinkmarkings generally remaining the same, except the dorsal and ventral parts are usually paler than the rest of the body, there is an additional longitudinal subdorsal row of dark spots, and there is a very dark sublateral line. The head is either pale brown or very pale green, with darker median, submedian and lateral lines, the latter edged posteriorly with pale yellow. Near pupation the larvae become very pale coloured.

The immature larvae nibble the leaf edges of the hostplant, but later instars devour the entire leaf and also other soft green parts of the grass. Early instar larvae generally remain exposed on the hostplant, but later instars hide around the base of the hostplant coming out at night to feed. The latter larvae emerge soon after sunset to climb the hostplant, and move very slowly. If disturbed while feeding, the larvae will release their hold on the grass and drop to the ground, remaining rigid for some time in whatever position they were in at the time of the disturbance. If the grass has a few dead leaves, then both green and brown larvae are extremely well camouflaged on the hostplant and very difficult to detect. The larvae feed slowly through winter and spring, and pupation takes place during summer. Larvae can withstand snow and freezing conditions during winter.

Small, stout, about 10 mm long, with a roughened surface, rounded posteriorly, wedge shaped anteriorly with a pair of widely spaced short horns, there is a thoracic keel, and the pupa is ridged laterally at the thorax-wing junction, the wing joints are protuberant, and there are subdorsal pairs of low abdominal protuberances, the more posterior pairs (segments 4-7) are joined by transverse ridges. Initially, the pupae are a semi-translucent greenish or whitish-brown colour, but after a few days all pupae acquire a greyish-brownish white colour with a very fine cryptic wrinkled pattern of grey or brown, and the thorax becomes greyish. The wing keel, thoracic ridge, the protuberances and transverse abdominal ridges are highlighted dark brown, the terminal wing edges are marked with a row of fine dark brown dots, and there is a pair of raised dark brown dots ventrally on the thorax. Only brown pupae are known from South Australia, but green pupae with brown markings have been reported in the nominate subspecies.

The pupa is suspended head downwards by a cremaster. Pupation occurs at night, usually near the base of the hostplant, but sometimes it can be on a log, stick, rock or another plant adjacent to the hostplant. The pupal stage lasts about 20-21 days in late summer.

Only one brood a year, with the bulk of the butterflies emerging from mid-January to mid-February. Odd butterflies continue to fly until the end of March. Males start to emerge earlier than the females. This butterfly tends to fly earlier in the season than the similar Oreixenica lathoniella herceus.

Presently known to occur only within 7 km of the coast, southwards of Millicent in the Lower Southeast Region of the state. Historically, its distributionmay have extended further north along the coast, and also inland to similar silky tea-tree wetlands. The local subspecies also exists in similar habitat in Western Victoria, particularly along the pristine parts of the Glenelg River and its tributaries. The nominate subspecies occurs in central and eastern Victoria, and alpine southern NSW and the ACT. Another subspecies occurs in the alpine Barrington Tops of the Great Dividing Range in northeast NSW.

The butterfly occurs in the cool, damp shady silky tea-tree, Poa and Gahnia clarkei wetlands adjacent to the coast, which do not dry out over the hot summer months, and where its larval hostplant grass in the understorey remains in a green condition all year round.

Vulnerable in South Australia. It is presently known from only two localities, both of which are reasonably secure. It can be locally common at one of the localities, but is rarely seen at the other site. It is more secure within the nearby Lower Glenelg National Park in Victoria.

Its silky tea-tree/Gahnia clarkei wetland habitat continues to be drained, cleared and degraded. This habitat has been severely fragmented in the past in the Lower Southeast. Draining of the wetlands puts the habitat under stress in summer, often causing the understorey grass to dry off, to the fatal detriment of the larvae of this butterfly and its relative O. lathoniella. As this habitat is now very limited, introduced woody weeds such as blackberry and Coprosma have the capacity to be a serious threat by choking off both hostplant and habitat.

Clearance and drainage of the remaining silky tea-tree/Gahnia clarkei wetlands in the Lower Southeast needs to totally cease, and these wetlands need to be fenced off from grazing domestic animals. Where possible, the exotic blackberry and Coprosma should be controlled or removed from these wetlands. As the habitat of this butterfly is now very fragmented, an attempt could be made to reintroduce the butterfly to some of the protected sites where the butterfly no longer exists. 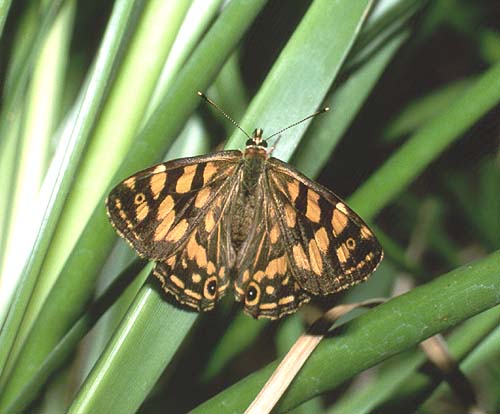 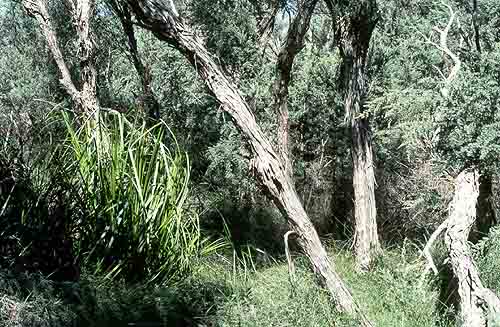