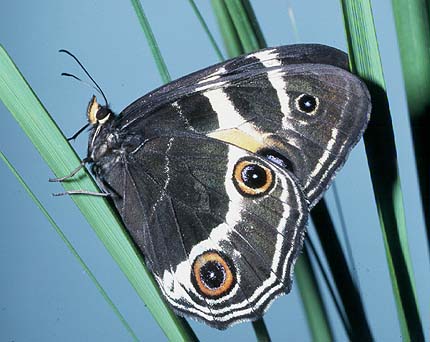 A large, attractive butterfly that only occurs in the coastal and southern parts of the Lower Southeast Region of South Australia. It is now very rarely seen due to the drainage, fragmentation and degradation of its Tall Saw-sedge (Gahnia clarkei) wetland habitats. Both sexes are usually seen in flight near their hostplants, where individual butterflies will often suddenly appear above the tops of the man-high saw-sedge hostplants, fly a few metres, then suddenly dip and disappear back in amongst the saw-sedge, and quite often may not reappear again. At other rare moments it may suddenly appear in the shrubland adjacent to the wetland and fly slowly about, seemingly lost, at 1-2 m from the ground. At this moment the large butterfly, with its vivid black and yellow colours and large ocelli (wing eyes), can be seen in all its glory. Males tend to patrol the wetland looking for unfertilised females, either just above the Gahnia or at the edges of the wetland. The males will also hilltop, particularly in the mornings, if there are any low hilltops nearby to the wetland.

The sexes are similar in appearance, and difficult to tell apart. The butterflies have a reasonably slow, floppy and irregular flight, but which can be swiftly elusive if the butterflies are approached. The butterflies are rarely seen settled and are normally timid, unless it is a female preoccupied with egg laying. If disturbed they fly off into a more distal part of the wetland, which if it is composed of Gahnia clarkei, they then become impossible to follow without completely shredding both clothes and flesh due to the cutting edge of the leaves of the Gahnia, (besides the presence of large tiger, black and copper snakes, and bush mites). It is not a very well camouflaged butterfly in the open, except when it is flying in and out of shade, when its dark colours then aid in camouflage.

Gahnia clarkei (tall saw-sedge or cutting grass), G. radula (thatch saw-sedge), G. sieberiana (red-fruit saw-sedge) (Cyperaceae). Larvae have only been found on Gahnia clarkei in South Australia. The larvae will readily transfer onto G. seiberiana in captivity, but this plant is not present in the Lower Southeast. The larvae feed on the young leaves of the hostplant.

Large, green, subspherical, flattened basally, nearly smooth, shiny but with some indistinct, very fine, incomplete vertical ridges near the top of the egg. Eggs are laid singly on the hostplant, usually on the outer young growth of the hostplant, hidden from sight on the inside of the leaves. Larval development within the egg commences immediately after being laid, and larvae begin to emerge in about 10-11 days in late summer. When ready to emerge, the larva incompletely cuts out a circular area at the top of the egg, leaving a small uncut portion, and then pushes the top out like a hinged lid. The egg shell is then usually eaten by the larva. The larvae then become very mobile, looking for the new Gahnia growth. When they find a place to their liking they will eat a small triangular piece out of the edge of the leaf, and if to their liking they will then settle down, hidden within the new growth.

Initially, pale yellowish green, with sparse, short dark hairs that have transparent knobs at their tips, and which are set on short, simple raised protuberant smooth bases. The hairs are darker and slightly longer at the posterior end of the larva. The head is black, very finely rugose but shining, with a few short hairs with only the dorsal hairs being knobbed, and with a pair of tiny vestigial dorsal horns. The posterior end of the larva is not forked in the first instar. After eating the green leaves of the hostplant, the larvae turn green and acquire a dark dorsal line, and pale yellowish subdorsal and lateral lines.

Subsequent instars are very similar in shape in colour, being long cylindrical and pale green coloured, with indistinct darker dorsal and subdorsal lines. The dorsal area of the larvae is usually paler than the lateral area. The long, knobbed hairs that are present on the first instar are lost in later instars, and the rear end becomes forked, typical for the Satyrinae. They are covered in short, simple spine-like setae set on a white, simple raised protuberant smooth base. The head is green coloured, square shaped, without the vestigial horns, and is finely rugose with some short spine like hairs. The forked tail is well developed,and is also covered in setae.

The final instar larvae are long cylindrical shaped, about 42 mm long. Pale green coloured with darker dorsal, and subdorsal lines. The dorsal area of the larvae is usually paler than the lateral area. The body is without long hairs, but bears numerous short pointed secondary setae imparting a rough scabrous appearance. The head is large, slightly rugose, with numerous short hairs. The top and bottom of the head are flattened, creating a square shape. The rear end is forked, and tipped pink.

The immature larvae move to the new growth of the hostplant after eating the egg shell, and hide within the closely overlapping leaves with their head pointing upwards. They feed by nibbling the leaf edges of the young growth. Later instars move to the slightly older leaves where there is more room to manoeuvre. Early instars have a characteristic eating style of eating out triangular shapes in the leaf edge, but older instars will eat out large angular chunks from the leaf edge, often completely chewing off the end of the leaf. The earliest instars will feed at various times during the day or night while they are well hidden amongst the young leaves, but older instars remain hidden on the hostplant during the day, coming out at night to feed. They hide during the day at the inside base of the long leaf they are feeding on, well hidden within the confined space between two leaves, usually with their head directed downwards. Their green colour usually provides good camouflage.

Elongate, slender, nearly smooth, about 18-19 mm long, tapering posteriorly, wedge shaped anteriorly with a pair of widely spaced short horns, there is a thoracic keel, the pupa is ridged laterally at the thorax-wing junction, and the cremaster is long and spinose. The pupae are green coloured, with the lateral ridge marked yellow. The pupae are suspended head downwards by the cremaster, and pupation usually takes place within the congested lower parts of the hostplant, but sometimes on adjacent plants. The pupal duration is variable, being generally longer in the cooler months. It is about 42 days in October, 32 days in November, to 18 days in December.

Probably only one brood a year, with an extended flight period from mid-October to early March, and with the bulk of the butterflies flying during late November to early February. Males tend to emerge earlier in the season than the females. In captivity, a summer brood can be completed in about 14 weeks, and it is theoretically possible for two broods to occur in South Australia during a season, although this cannot be substantiated in the field. Both early and late instar larvae can often be found together on the one hostplant. Two broods occur in coastal NSW.

In South Australia, this butterfly only occurs in the Lower Southeast Region, within the remant Gahnia clarkei wetlands. The butterfly has recently been sighted in the Robe area at two small wetland remnants. Previously its known occurrence was south of about Millicent.

The local form of the butterfly, which also occurs in western Victoria, used to be known as subspecies antoni Tindale, but it is now included in subspecies albifascia, which has an extended distribution to eastern Victoria and southeastern-most NSW. The local butterfly occurs as a distinct morphological clinal form that has more brighter and exaggerated markings than in butterflies from populations in eastern Victoria.

In South Australia this butterfly occurs only within the Gahnia clarkei wetlands, which are present only within the Lower Southeast Region. These wetlands are fed by permanent freshwater springs, and occur south of Latitude 37° 30' (approximately a line through Millicent to Nangwarry) and also along a narrow northern coastal extension to the Robe area.

Considered to be Rare in South Australia. Due to the historical, widespread destruction and degradation of its wetland habitat, the remaining habitat occurs as disjunct fragments in which the butterfly is presently known from only five localities, where it is rarely seen. However, there has been a recent concerted effort by local environmental authorities to preserve and fence-off these remaining wetland fragments, and as a result the butterfly is presently considered to be secure. The butterfly can be locally common in the eastern states (as local clinal forms) where its preferred habitat is more extensive, although there too its wetland habitats are being incessantly destroyed by indiscriminate urban and small-scale agricultural expansion.

Where not protected, its Gahnia clarkei wetland habitat continues to be sureptitiously drained, cleared and degraded. This habitat has been severely fragmented in the past in the Lower Southeast. Draining of the wetlands puts the habitat under stress in summer, often causing the Gahnia to tightly inroll its leaves to the fatal detriment of the larvae of this butterfly. As this habitat is now very limited, introduced woody weeds such as blackberry and Coprosma have the capacity to be a serious threat by choking off both hostplant and habitat.

Clearance and drainage of the remaining Gahnia clarkei wetlands in the Lower Southeast needs to totally cease, and these wetlands need to be fenced off from grazing domestic animals. Where possible, the exotic blackberry and Coprosma should be controlled or removed from these wetlands. An attempt could be made to reintroduce the butterfly to some of the protected sites where the butterfly no longer exists, and hostplant density could be improved by the planting of new plants. The butterfly is a good survivor, and can exist in small areas of wetland provided both are left alone. 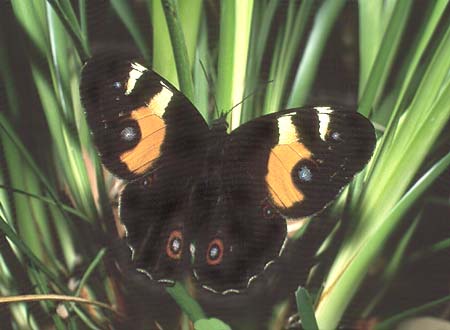 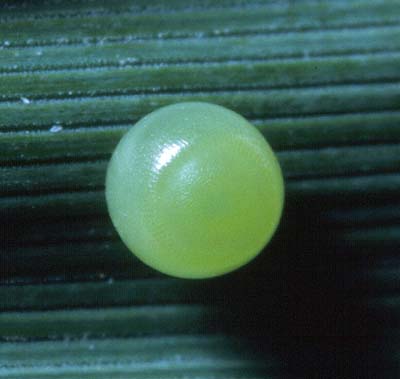