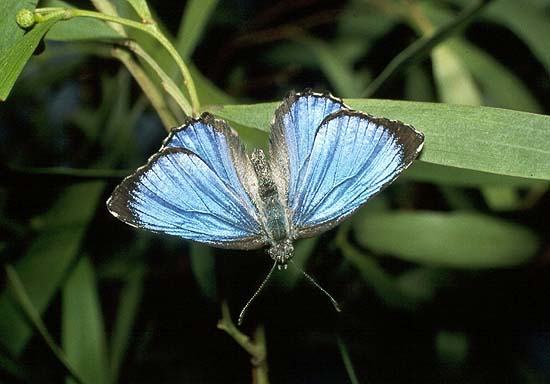 This butterfly belongs to the group of Ogyris that associate with small ants, and members of this group have distinctive eggs and early stages that typify the group. O. oroetes, along with O. barnardi and O. olane form the isolated O. olane Species Subgroup within this group, as these three butterflies all have clubbed antennae, whereas in all other Ogyris butterflies the antennae are not clubbed. Like all Lycaenids the adults are sexually dimorphic in morphology on the wing uppersides. In this species the extent of the blue/purple areas on the wing uppersides is much more extensive in the males. Under certain lighting conditions the males can have a purplish glint, which is increasingly more obvious in butterflies in a northwards direction across their distribution range in South Australia and for specimens from near Ooldea they can be decidedly purple. The extent of the blue/purple areas in both sexes is variable.

O. oroetes is very similar in appearance to O. amaryllis and both can occur together in similar habitat, but very rarely fly together. In southern areas for the range of O. oroetes the two are very difficult to separate in the field, but the former can be differentiated from the latter by the underside markings. The postmedian band in both wings (but particularly the forewing) is not dislocated midway with the lower portion not displaced towards the wing base as in O. amaryllis, and the females of O. oroetes do not possess the bright orange-red markings in the forewing discal cell as for O. amaryllis. Near Ooldea, male O. oroetes can be similar to male O. barnardi, but on the forewing underside the postmedian band in O. barnardi is strongly bent (but not dislocated) whereas in O. oroetes the band is straight (except at the ends). These two butterflies also tend to fly in different habitats.

O. oroetes butterflies are knowingly, very rarely seen in flight in South Australia. When not feeding, the male butterflies are usually either active about the tops of the Eucalyptus mistletoe host trees, or spend time settled with wings closed on a bare branch or twig near the top of the tree. There they will wait for newly emerged females to show up for mating. These butterflies become invisible when settled, as like all other Ogyris species they have cryptically marked undersides that make the butterflies indistinguishable from the rough bark of trees and bushes when they are settled. Sometimes they imitate a blackened dead leaf still attached to the bare twigs.Periodically however, the males will fly off to patrol an area by circling a few different trees harbouring the mistletoe hostplant in a given area, then settle again for a while before repeating the patrol exercise. The males are not known to actively hilltop in South Australia. The females are slower in flight and when not feeding on the flowers of the mistletoe they will spend much of their time searching for places on the mistletoe to lay eggs.

The metallic blue colour of these and other blue coloured Ogyris butterflies is affected by moisture, and if the blue wing scaling somehow gets wet, it irreversibly changes to green.

The mistletoe Amyema miquelii (box mistletoe) (Loranthaceae). This mistletoe normally only associates with Eucalyptus. The larvae eat the flower buds, flowers, leaves and soft stem parts of the mistletoe, but are particularly fond of the flower buds.

In southern areas of the butterfly's range in South Australia, larvae are usually attended by a few small black or dark brown and black ants. Fat abdomened Crematogaster species are the usual ants in attendance, although on northeast Eyre Peninsula Doleromyrma and Iridomyrmex species are usually in attendance, and in one case the black stinging Rhytidoponera metallica was present. In the Ooldea area within the northern area of the butterfly's known range in South Australia, small black Iridomyrmex ants have been seen on the host plant harbouring the early stages, but more often in this area, ants are not present. In the eastern states, early stages are also known to be attended by Anonychomyrma sp, Camponotus sp,Froggattella kirbii, Meranoplus sp, Ochetellus sp, Podomyrma sp and Tetraponera sp.

Small, greyish white with areas of dark grey, hemispherical shape, basally flattened, the top is domed. The sides are coarsely reticulated in a hexagonal pattern that continues to the edge of the small pale coloured, depressed micropylar area at the apex of the egg. At each reticulation intersection there is a small raised blunt projection. The egg is typical of the eggs for the O. olane Species Subgroup. They are normally laid singly, usually on the stems and flowers buds of the mistletoe, but also on the leaves and bole of the mistletoe. There is often a very large population of tiny parasitoid wasps on the mistletoe and very few eggs survive parasitisation.

The first instar is pale greyish yellow, later becoming pale green after eating the young leaves of the hostplant. Long onisciform shape, with scalloped lateral edges. The posterior dorso-lateral organs are not developed. The head is large, smooth, brownish yellow, hidden beneath the body. There are long dark peripheral and dorsal setae, which are longest anteriorly, posteriorly and dorsally. Dorsal setae occur in two pairs, one pair being long and recurved, the other pair being short, recumbent and directed to the rear. Intermediate instars gradually lose the long dorsal setae and gain the posterior dorso-lateral organs, and are onisciform (slater shaped).

The fifth (final) instar is about 22-24 mm long, polymorphic being either some shade of brown, brownish pink or yellowish green. The brown larvae are marked similarly to other small Ogyris in South Australia, with pale yellow dorsal chevron markings, and other subdorsal markings, and the anterior and posterior extremities are usually free of pale markings. In the pink and green larvae the markings are indistinct. Onisciform shaped with a thoracic dorsal furrow, the lateral edges are scalloped, and the anterior and posterior areas are flattened, and there are some short peripheral hairs that are longer anteriorly and posteriorly. The body is covered in pale and dark coloured, minute secondary setae, which are recumbent, club shaped and spiny in appearance, set on a protuberant,angular and ridged base. The secondary setae impart a scabrous appearance to the larvae. The posterior dorso-lateral organs are well developed. The head is small, smooth, yellow, hidden beneath the body.

In the Flinders Ranges and Riverland areas, larvae have been known to occur with larvae of O. amaryllis.

Short cylindrical, rounded anteriorly and posteriorly, about 13-15 mm long, brown coloured with other darker cryptic markings, and there is a darker dorsal line and usually a single row of dark subdorsal dots. There is usually a pair of large, dark brownish dorsal spots above the head. The surface of the pupa is without hairs, but bears a very fine reticulated pattern (similar to the eggs) that produces a very fine scabrous surface, and which includes tiny specialised secondary setae that are more common around the spiracles. The pupa period is about 24-27 days in late spring.

Pupation usually occurs in the first lot of secure bark on the host Eucalyptus, below the mistletoe, often in the first crook of the tree below the mistletoe. Occasionally they will pupate in the final larva shelter near the mistletoe, or near the base of the host Eucalyptus well away from the mistletoe. Larvae usually pupate singly, but will also pupate next to O. amaryllis if they are also on the same tree. Pupating larvae surround themselves with a loosely webbed, silken cocoon-like shelter, which presumably affords some protection from larger predators, or perhaps from other Ogyris larvae which can cannibalise soft pupating larvae. There is normally space within the silk webbing for the small attendant ants to pass through to attend to the live pupae. Pupae are attached to the silked substrate by anal hooks and a central girdle.

The pupae are known to stridulate, making a series of audible clicks, which are believed used as a means of communicating with the attendant ants. There are normally several ants in attendance with a pupa, but sometimes there are none.

The butterfly flies throughout the warmer months, with records from September to early June, and there is a single captivity record in early July.

In South Australia the butterfly only exists where its mistletoe hostplant occurs. It is essentially a tropical-subtropical to hot temperate butterfly and is unable to tolerate continuous cold temperatures, and is probably limited to average annual minimum temperatures above about 10-11°C. The butterfly occurs mostly in the pastoral areas where very little survey work has occurred, and based on the known distribution of its hostplant in the Northwest Region of the state, the butterfly is likely to have a more extensive distribution than is presently known. The distribution of hostplant in this area is very localized and discontinuous. There are also isolated occurrences of the hostplant in the central and northeast areas of the Far North Region of the state, but are probably not of high enough density to support viable colonies of the butterfly. There is a recently confirmed record of the butterfly occurring at Clare in the North Mt Lofty Range of the Midnorth Region, but the elevated North Mt Lofty and Southern Flinders Ranges would normally be precluded as potential habitat due to the likelihood that most of these areas would be too cold, even though the hostplant of the butterfly is present. However, with the recent elevation of temperatures due to drought and 'climate change' since about year 2000, the range of this butterfly could be creeping southwards. From recent studies in WA there is a belief that the butterfly may be able to marginally extend its southerly flight range into cool temperate areas by having a flight during the hot autumn months and producing eggs that diapause during winter-spring.

The butterfly is very rare in its occurrence, but widely distributed.

Not generally under threat except where the habitat is adjacent to farming communities and affected by poison spray drift during crop spraying activities, especially when the poison is applied by aerial means. Parts of its eastern range are within the prime breeding grounds for the plague locust and the butterfly would be decimated by any toxic spray programs adopted by the Locust Control Board (as happened in year 2000).

None required, except that any spraying activity should be carried out judiciously. 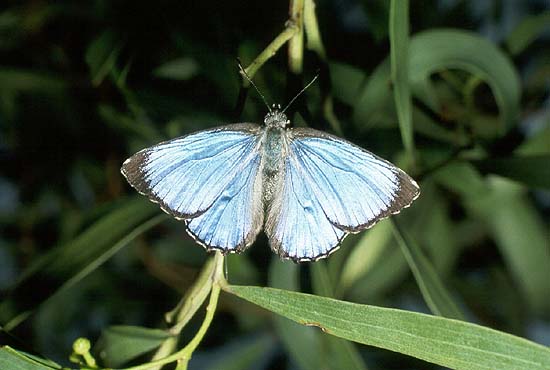 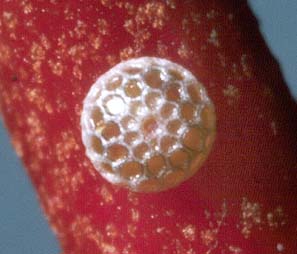 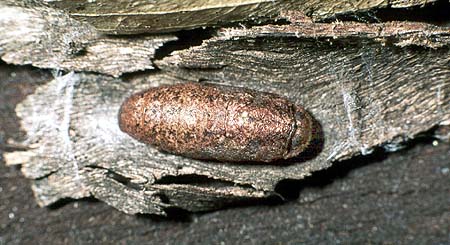