A small butterfly that belongs to a group of very similar species that range through much of the Eastern Hemisphere. It is usually overlooked for the more common Zizina labradus, a close relative. It is distinguished from the similar smaller species Zizula hylax and also from the larger Z. labradus in usually having a black spot inside the discal cell of the forewing underside, although this spot can be obscure in worn specimens, particularly males. The area of blue colouration on the wing uppersides of the females is usually stable.

The flight is weak and fluttery. The butterflies fly near the ground and both sexes usually remain near their hostplants. During the mornings the males are often seen to slowly fly around the hostplants looking for newly emerged females with which to mate. On very hot days the butterflies are attracted to water or moist patches at the edges of waterholes along creek beds, where they will sip from the water's edge or directly from the damp patch. The butterflies are normally not timid and are easily approached with care.

The early stages and habits are very similar to Zizina labradus.

In South Australia the larvae are known to feed on Glinus lotoides (Hairy Carpet-weed) and G. oppositifolius (Slender Carpet-weed) (Molluginaceae). Other host-plants in Australia that also occur in SA include Tribulus spp incl. *T. terrestris (Caltrop) (Zygophyllaceae). These plants are annual or perennial herbs. Overseas, the larvae also feed on *Amaranthus spp incl. *A. deflexus, *A. viridis (Amaranthaceae); *Euphorbia spp (Euphorbiaceae); flowers of small legumes incl. *Trifolium spp (clovers) (Fabaceae); and *Oxalis corniculata (Oxalidaceae). The larvae will eat all the soft parts of the hostplants, including leaves, flowers and fruits. They will burrow into flower buds and fruiting capsules and eat out the contents. On Glinus lotoides, which has a dense tomentose covering, the larvae will eat the firm surface parts of the leaves, leaving behind the fluffy tomentose-down.

Small, initially pale green, later turning greyish white, hemispherical, strongly flattened top and bottom, slightly depressed on top with a small darker central micropylar area. Ornamented with a coarsely reticulated pattern on the side that becomes finer on top. The reticulation facets on the side are trigonal, which are grouped together in an orderly fashion to form large hexagons. The facets on the top of the egg are much smaller and are of irregular shape but tending to hexagonal shape. There are short, thick, blunt spines at the pattern intersections on the side of the egg, which are absent on the top of the egg. Laid singly on the foodplant, which can be the flower buds, leaves and other softer green parts.

The first instar is initially pale yellow, changing colour after eating the foodplant, with long lateral and long recurved paired dorsal hairs. The head is black. In subsequent instars the larvae become covered in secondary setae, and the long hairs become progressively shorter with each instar.

The mature larvae are about 10 mm long, onisciform (slater shaped) with an indistinct longitudinal dorsal furrow. The head is small, smooth, dark brown to yellow brown, hidden beneath the body. The body is covered in numerous, pale coloured, short hairs that are longest dorsally and peripherally. The tiny secondary setae are similar to the hairs having a long erect or recumbent simple pointed central spine set on a raised stellate base having about 5-8 rays. The secondary setae impart a scabrous appearance to the larvae. The posterior dorso-lateral organs are well developed. The larvae are coloured some shade of green with darker coloured longitudinal dorsal and lateral lines, and hachured subdorsal lines. The darker lines are sometimes brownish. The lateral line is marked further with a very narrow white line. Some larvae are strongly brownish coloured, which usually indicates parasitisation. The colours are cryptic and blend in with the portion of the foodplant they are eating. Larvae feed openly during the day. The presence of larvae on the foodplant is readily discernible by holes in the buds and by the presence of small ants which usually indicate the position of actively feeding larvae.

Short cylindrical, rounded anteriorly and posteriorly, about 8 mm long, with numerous short bristles on the abdomen, thorax and head but which are absent ventrally and on the wings. Subtranslucent pale green when freshly pupated, later becoming opaque. Sometimes yellowish, and a few days before the adult butterfly emerges the pupae often turn brownish. With variable amounts of fine black speckled markings, and with a black dorsal line and a broader broken subdorsal line. The latter is sometimes nearly absent. Weakly attached by anal hooks and a central girdle, either to some part of the foodplant where it touches the ground particularly near the main stem, to leaf debris beneath the foodplant, or within ant chambers below ground around the main stem where they may be attached directly to the stem or the soil. The pupating larva will sometimes loosely web together a folded leaf or two leaves, within which it will pupate. The pupal period is variable. In the Far North of SA the pupal period is 13-16 days in mid-spring. It can be as short as 5 days in hot tropical areas.

It is not known if the pupae have the ability to aestivate, to adjust to the seasonal growth of the host plants. In captivity the pupae always mature quickly.

The only South Australian records are for late September-early October in the Far North, early March in the Riverland, and late April-early May in the Far Northeast. In nearby New South Wales and Victoria it has been seen flying from January to May. There is also a record from the Alice Springs area to the north of SA at the end of December. In SA it is likely the butterfly would fly throughout the warmer months wherever its host plants remain in a green, growing condition, and in this situation would be dependant on seasonal rains or the presence of water. The butterfly is seen all year round in the tropical north of Australia. It has not been reported what the butterfly does when the host-plants die-back through lack of water. A brood can be completed in less than seven weeks during early spring in the hot Far North areas of the state.

This butterfly normally requires a tropical to subtropical environment but sometimes ranges into sheltered, hot temperate areas. In South Australia the butterfly has at present been encountered at Berri on the River Murray, and also north of Oodnadatta in the Far North, and again near Innamincka in the Far Northeast. Its Glinus and Tribulus hostplants have been widely recorded in the Murray-Darling Basin and also along the ephemeral river system associated with the Lake Eyre basin in the Far North pastoral areas of South Australia, and so there is a good chance the butterfly will be further encountered in those regions. There are also records from the adjacent Alice Springs area to the north of SA and also to the east in the Mildura and Lake Hattah areas of northwest Victoria, and from Lake Victoria in southwest NSW. It occurs more commonly in the tropical north of Australia, and in the hot, humid, open woodland areas of New South Wales and Queensland. The butterfly also extends throughout tropical Asia and on into the northern Mediterranean, but is replaced in Africa by a very closely related species Zizeeria knysna.

The early stages of known breeding populations of the butterfly in the Far North Region of SA are heavily parasitised by flies and wasps, and this would suggest that these populations are relatively sedentary. However, the butterfly probably has some degree of nomadic dispersal ability (typical of the Polyommatini group of lycaenids), with breeding stocks being replenished from interstate due to the butterflies following the major creek-lines down into South Australia during periods of good inland rain.

In the Riverland area of South Australia and the adjacent areas in New South Wales and Victoria, the butterfly's host-plants are associated with the floodplains and irrigation areas of the River Murray. In the Far North and Northeast of the state the Glinus (carpet-weed) hostplants are associated with waterholes along major ephemeral creek systems. The Glinus plants are sometimes also associated with saline, alluvial clay depressions and also have a particular liking for high nitrogen, resulting from animal effluent concentrated in such areas as stockyards and around waterholes and man-made dams.

Presently classed as rare in SA Its preferred Glinus hostplants have particular growing requirements and are not common. In the Riverland the butterfly has not been seen since the original specimens were observed in 1962, and it may be extinct in this region of South Australia, although it was last reported from nearby Mildura in 1977.

The Glinus hostplants are associated with waterholes in the Far North and Northeast of the state. Most of these waterholes are on pastoral leases and consequently the plants are likely to suffer from cattle trampling. It is not known if the cattle also eat these plants (the plant is not listed as being poisonous), but if so then the habitat of this butterfly would likely suffer considerably in this situation. These same waterholes would also be affected by periodic floods and as a consequence the butterfly would have to re-establish itself from adjacent unaffected areas, perhaps even from interstate depending on the degree of local habitat degradation. In the Riverland the Glinus plants grow in the floodplain environment, and since there has not been too many floods in the Murray River system over the past 30 years due to the massive uptake of water by irrigators, this plant is now very rare. Caltrop is a terrible burr-weed of orchards and pastures in the Riverland and is supposed to be eradicated on sight.

The carpet-weed (and any other native hostplant other than caltrop) needs to be re-established in the artificially produced flood plain areas that are now being managed by various farmers and conservationists along the River Murray system. The same hostplants could also be grown in council reserves in the towns along the River Murray. In the Far North and Northeast of the state, carpet-weed could be reintroduced to favourable creeks on conserved lands, or even artificial waterholes could be created in similar situations that would also suffice to provide water to other flora and fauna in the region. 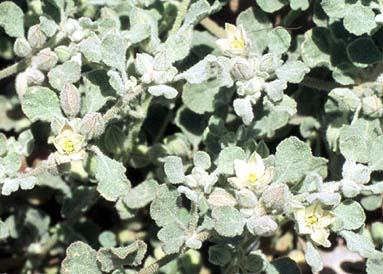 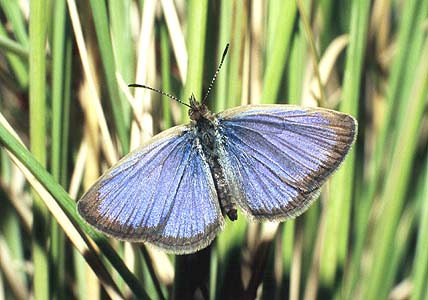 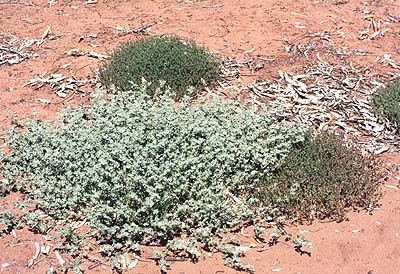 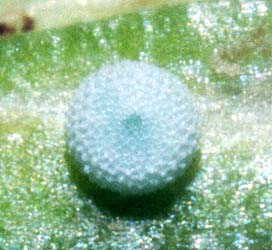 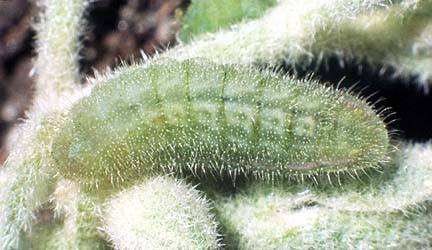 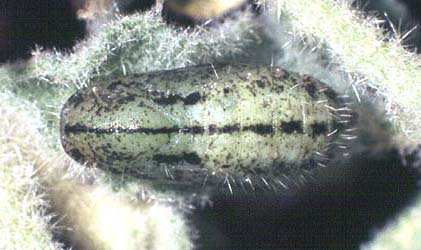