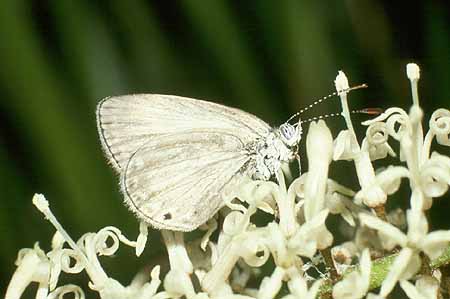 A small butterfly usually overlooked for the more common Zizina labradus, a close relative. It is easily distinguished from all other small blue butterflies by its plain silvery white underside and the single large black subtornal spot on the underside of the hindwing.

It belongs to a group of very similar species that range through much of the Eastern Hemisphere. The flight is weak and fluttery, with the butterflies usually flying close to the ground, but will fly higher to reach the flowers of the taller hostplants. Both sexes usually remain near the larval hostplant, although males will sometimes hilltop. The extent of the pale blue areas in the wings of the female is variable.

The butterflies are normally not timid and are easily approached with care. They are usually preoccupied with feeding and egg laying.

Small, initially pale green, later turning bluish white, hemispherical, strongly flattened top and bottom, slightly depressed on top with a small darker central micropylar area. Ornamented with a coarsely reticulated pattern on the side which becomes finer on top. The reticulation facets on the side are mostly trapezoidal. The facets on the top of the egg are much smaller and are of irregular shape. There are short, thick, blunt spines at the pattern intersections on the side of the egg, which are reduced in size or absent on the top of the egg. Laid singly on the hostplant, usually on the flower buds and sides of the open flowers, but sometimes on the young terminal leaf growth.

The mature larvae are about 10 mm long, onisciform (slater shaped) with a longitudinal thoracic dorsal furrow. The head is small, smooth, yellowish brown, hidden beneath the body. The posterior dorso-lateral organs are well developed. The anterior, posterior and peripheral parts of the body are hairy, which are longest anteriorly and posteriorly, and the body is covered in numerous, pale coloured, minute secondary setae having a stellate base and a long erect serrated and pointed central spine. The secondary setae impart a scabrous appearance to the larvae. Larvae colour and markings are variable, pale green or pinkish green, with a longitudinal purplish dorsal line and adjacent forward directed purplish chevrons, with further pale yellow subdorsal markings. The colours are cryptic, matching the green calyx of the flower, and larvae feed openly during the day. The presence of larvae on the hostplant are readily discernible by holes in the buds and flowers. Small ants are usually indicative of the position of actively feeding larvae.

Larvae prefer to eat the pistil and stamen parts of the flowers and buds. They make a hole in the side of the bud and then extend the head to eat out the inner contents of the bud.

The only South Australian records are for early October. In the nearby Alice Springs area, further to the north, it has also been seen flying in early October. In this region it would seem the butterfly flies after winter rains, which promote the reliable growth and flowering of the larval hostplants. The butterfly is seen all year round in the tropical north of Australia.

This butterfly has only recently (2000) been reported from South Australia, where it was found flying in the ephemeral creek systems in the extreme Far Northwest of the state. Its small flowering leguminous hostplants are widely distributed in the far north pastoral areas of South Australia, particularly in the ephemeral river systems, and so there is a good chance that further records of the butterfly will eventuate.

The butterfly probably has some degree of nomadic dispersal ability (typical of the Polyommatini group of lycaenids), with breeding stocks being periodically replenished from interstate northern tropical areas after good rains and floods, with the butterflies following the major creek lines down into northern South Australia. The butterfly occurs more commonly in the humid tropical north of Australia. The butterfly also extends throughout much of the eastern part of tropical Southeast Asia.

In South Australia this butterfly has only been found in the ephemeral creek systems in the semi-arid extreme Far Northwest of the state.

Presently classed as rare in South Australia. It is a locally common butterfly in the tropical north of Australia.

Not much is known about the habits and distribution of the butterfly in South Australia. Its continued survival in the region is likely to be dependant on the occurrence of reliable rains in the central Australian Region. Cattle grazing and trampling would be the main threat to established colonies.