This species has highly picturesque, polymorphic (multicoloured) larvae. Although widespread the butterflies are naturally rare. Males are more commonly observed than females, and are usually encountered hill-topping, especially along dunes, waiting for newly emerged females to fly in for mating. If the males are present with males of its close relative Erina hyacinthina simplexa, then the two groups of males will fly at different heights. The former will patrol the dune below a height of about 1 m, while the latter will patrol above a height of 1 m. The male usually perches on a low twig but sometimes rests directly on the ground. Females are rarely seen flying, yet its Grevillea hostplants nearly always carry eggs during the flight season.

The genus Candalides is a diverse one because there are differing adult and immature stage morphologies and larval foodplant preferences. The genus needs a serious revision of its taxonomy. C. cyprotus is a more isolated member of the genus, and besides some adult morphological differences, its eggs are coarsely reticulated, whereas the other members have finely reticulated eggs.

Like all Lycaenids, the sexes are sexually dimorphic in morphology on the wing uppersides. In this species the difference is very clear, with the males being bright purple coloured, while the females have either broad blue or purplish blue areas. Both sexes are extremely attractive. Over its northwards distribution, the wing undersides become increasingly paler and specimens from northern areas have very indistinct markings. The purple colouration in the males is very intense when freshly emerged, but quickly becomes dull brownish-purple after flight. The males also have conspicuous, indigo coloured, trident shaped sex marks, and are capable of fast flight, but both sexes can usually be approached with care when settled.

In South Australia it utilises plants belonging to the Proteaceae family. In temperate areas its primary larval hostplant is the red flowered Grevillea huegelii (comb grevillea) (Proteaceae). If the latter is absent then it will utilise Hakea leucoptera (needle bush) (Proteaceae). Recently (2011) in the Yumbarra Conservation Park it was found to utilise G. pterosperma (desert grevillea) and G. sarissa ssp umbellifera (desert comb-grevillea). The former is a tree grevillea with white flowers, while the latter is similar to G. huegelii but has much larger leaves. It probably utilises other Grevillea and Hakea species like H. mitchellii (desert hakea) as the butterfly can occur in areas where the known hostplants are absent.

The butterfly was also recently found flying in the Northern Territory, adjacent to the Far-northwest Region of South Australia. Hostplants were not identified but Grevillea juncifolia was considered a possible candidate as it was flowering at the time, although the stickiness of the flower buds may preclude its use as a hostplant as the larvae could become trapped; seven other Proteacous plants also occurred in the area at the time. In the eastern states, larvae are found on Conospermum species (smoke-bushes), Grevillea spp (Proteaceae), and Jacksonia scoparia (dogwood) (Fabaceae). Early stages have yet to be found on Conospermum in South Australia.

The larvae feed on the flowers or soft new growth of the hostplants. In captivity the larvae will eat the flowers of most species of Grevillea and Hakea.

Small, initially pale green, later turning bluish, hemispherical, top rounded, base flattened, with a coarsely reticulated, strongly raised pattern which is continuous to the micropylar area, and with very slight blunt projections at the pattern intersections. The reticulations are irregular, consisting of shapes varying from quadrangular to hexagonal. Laid singly on the hostplant. On Grevillea huegelii they are laid at the end of newly formed flower buds, and only on those plants on which small black ants occur. The eggs hatch in about one week.

The final instar is about 20 mm long. Onisciform shape, with well developed, soft, bristly tubercles being present dorsally and laterally. They occur in dorsal pairs on the first three anterior body segments, followed by another eight single dorsal tubercles. There is a single tubercle on each segment laterally, the one present near the posterior end being significantly extended. The body is covered in numerous minute secondary setae, which are curved spinose and slightly serrated, while the base is simple and ridged. The head is small, smooth, brownish yellow, hidden beneath the body. Colour and markings are highly variable, and very picturesque. The pattern is of the usual Lycaenid type with a longitudinal dark dorsal line, a wide dorsal apron edged with inward directed dark chevrons, and a further series of chevron patterns along the side, and finally a pale lateral line. The overall colours usually blend in with the portion of the hostplant they are eating, such as mostly red or purple or orange or pale grey or whitish if they are eating like coloured flowers, or green or yellowish if they are eating leaves. In captivity the colour can change several times during the life of the larva, especially if the hostplant is changed between different coloured flowers or leaves. Near the point of pupation the larval colour fades and the larger tubercles change colour to brilliant turquoise.

The camouflage of the larvae on their hostplants is excellent and it is very difficult to observe them in the wild. The larval biology is unusual for a butterfly in that it is capable of completing its larval period in only four instars. (Lycaenids normally require five instars). In captivity the larva period takes 4-6 weeks to complete.

Have a shape typical for the Candalides tribe, about 14 mm long, roughly triangular in cross-section, and having a well-developed abdominal saw-tooth dorsal ridge with short blunt spines. A divided blunt dorsal projection occurs on the thorax. The lateral part of the abdomen and anterior edge of the head is flattened, with the head flange divided at the front. It is cryptically marked brown and grey. The dorsal bifid projection is white, the dorsal abdominal spines are white tipped, the wing cases are grey, and there is a pair of black spots dorsally above the head. Attached by the cremaster and a central girdle. Pupae have not been found in the wild in South Australia. The pupae are known to stridulate, making a series of audible clicks, which are believed to be used to send messages to attendant ants.

In captivity the pupal duration is extremely variable. It can be as short as 24 days, but it more usually lasts a full year, with the butterfly emerging the following season. However, some pupae diapause (remain dormant) for much longer, with records up to about 36 months. Limited experimentation with pupae in captivity indicates that dormancy is broken primarily by the flowering of its hostplants that normally occurs in spring.

Normally mid-September to mid-December, with the flight starting earlier in the northern hotter areas of its range. It is believed to have only one brood a year in South Australia, although specimens in captivity have completed their life cycle in 9 weeks and have emerged at other times than above, suggesting that more than one brood may be possible if the climatic conditions are suitable. An autumn brood occurs in Queensland.

In South Australia the butterfly has usually been found in the southern mainland parts of the state, wherever its presently known hostplants occur in sufficient density. Based on the distribution of its larva hostplants, the butterfly is likely to be more extensive than its present known range. It has yet to be found in the forests of the Lower Southeast but may eventually be found in that region in the low woodlands along the coast or along some of the limestone-terrarossa ridges. The butterfly was recently recorded in the southwest of the Northern Territory, just across the border from South Australia, and some 800 km from its previous, closest known distribution point. Also recorded from southwest Western Australia and western Victoria, and also coastally and along the Great Dividing Range in NSW and southern Queensland. A separate subspecies occurs in southern Queensland.

It occurs mainly in open mallee (low rainfall eucalypt) habitat, but also in higher rainfall shrubland/heathland. The butterfly favours the more pristine habitats of its hostplants, which are widespread and locally common. The Grevillea huegelii occurs on the heavy red soils of the inter-dune areas, whereas the Hakea and some other Grevillea species hostplants prefer the sandy soils on the dunes.

Considered to be a rare butterfly, males are more often encountered than females.

Its mallee habitat is still widespread. The butterfly is only threatened in areas of urbanisation and agricultural disturbances. Now extinct in the Adelaide region. Its hostplants are not normally grazed due either to their inedible properties or very prickly leaves.

None required at this point in time, so long as there is no further loss of habitat. 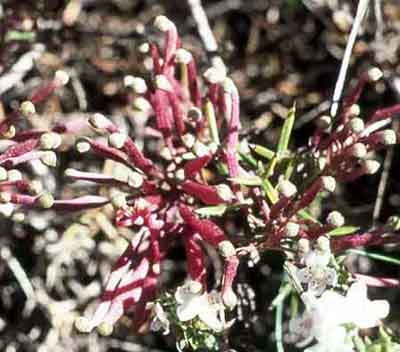 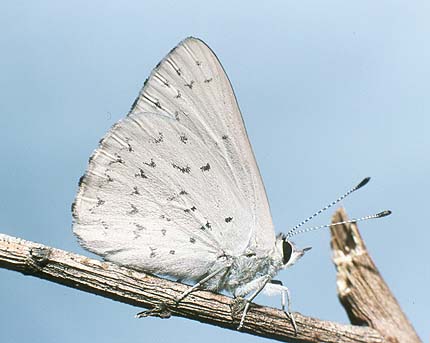 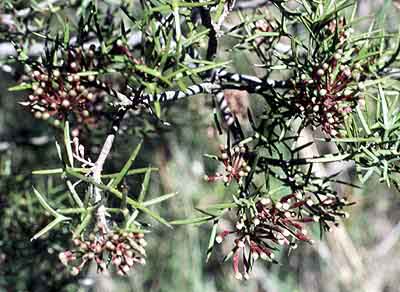 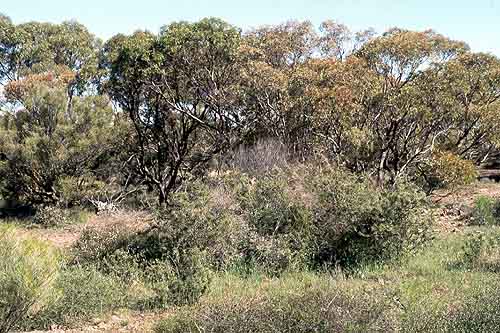 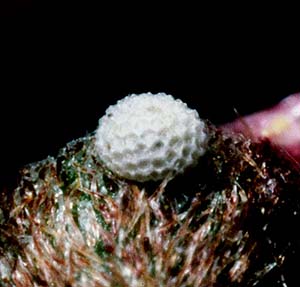 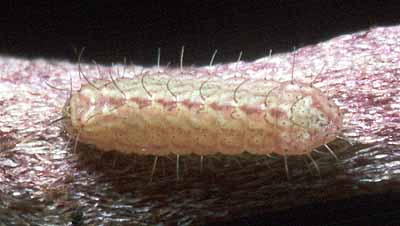 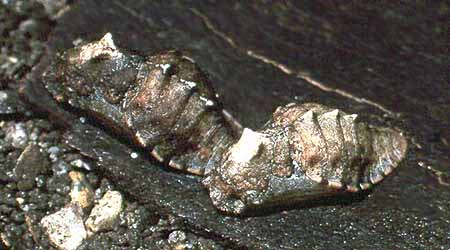