This unusual shaped butterfly belongs to the endemic Australian Theclinae group, which have a very strong association with ants. The hindwings are tornally elongate and 'square' looking, which are particularly accentuated in the females due to their forewings being larger than the hindwings.The males are capable of very fast flight and are nearly always found congregating on pinnacle hill tops (leks) bearing at least one tree or tall bush (dead or alive) at its peak.Earlier in the day (late morning) they tend to fly at a height of about 2 m around the hilltop lek, with a slowed loping flight looking for any newly emerged females with which to mate. Later on they perch with wings folded on the exposed extremities of the bush or tree, usually at its top, and in this situation they are very territorial with each male competing for the best, highest position.Sometimes they will leave the hilltop in the early afternoon to escape the heat, not to return again for the rest of the day, or depending on the individual they may return again in the late afternoon.If the apex of the hill is bare or has been cleared the males will collect on a lower ridge top having similar floral attributes.Sometimes they will collect in the brood area on a prominent tree or bush if it is a major colony. The females are mostly encountered on the same hilltops frequented by the males.Newly emerged females, if they have not already mated with any males occurring in the brood area, will fly to the hilltops to mate with the males, then return to the brood areas (often on the lower flanks of the hill) where they remain, usually separated from the males unless they use the same flowering bush for nectaring purposes.

This is not to say that these butterflies only inhabit pinnacle hilltops (as otherwise there would be no dispersal, leading to the demise of the colony), but rather because of their rarity it is the usual place where they may be encountered by the human observer. The hilltops are a focal point to which both male and female butterflies can easily relate to for courtship (lekking) purposes. This can be partly alleviated by using singularly tall trees adjacent to the colony as a replacement for the hilltops. Without a high-point the butterflies would have to remain near the foodhost and pupation area and depend upon their pheromone dispersal and the detection of the pheromones of the opposite sex for courtship. Since the emergence of opposite sexes from their pupae is not always coincident, then the first emergent butterfly may eventually have to fly off to find flowers for nectaring purposes before the opposite sex has emerged.In doing this, and without a nearby hilltop to which it can navigate by, the butterfly would likely become permanently lost to the colony. Many rare types of butterflies and other insects need to use hilltops for courtship lekking purposes for the reasons mentioned above.

In South Australia, flight seems to be very much dependant on weather conditions, preferring hot (20-33 C), fine parameters with low wind velocities. Males are very placid when settled, but they often perch high up in the crowns of trees requiring binoculars for recognition.Females are very rarely seen.The uppersides of the males have a uniform rich brown colour, whereas the females are dark brown with usually some blue colour covering about half the wing extent. The underside markings of the South Australian population are highly variable, from a clear pattern of small irregular spots and transverse bars edged with white to a pattern with very few spots and no bars. The species is closely related to several other very similar looking species in the Genus Acrodipsas, and about the only reliable means of identification is to examine the underside forewing postmedian transverse bar, which (if present) is broken or dislocated about 1/3 the way in from the anterior (costa) edge of the wing, with the anterior portion of the bar always slightly curved outwards towards the outer (termen) edge of the wing. However, this distinction is also found in A. myrmecophila but this butterfly is smaller and has a different wing shape and underside pattern.

This butterfly was only found to occur in South Australia in 1995.It was not seen again until recently (2007), when females were also seen for the first time. Recent DNA analysis of this butterfly (Eastwood 2002) indicate its molecular attributes are more isolated from the nominotypical eastern states populations occurring along the Great Dividing Range. The males of the local subspecies (including those from west Victoria) are usually pale bronze-brown on their uppersides, similar to a population occurring in Western Australia, and differing to the eastern states populations in which the males are usually dark brown.

Theorised to initially be fed by the attendant ants within the ant brood chambers, but later turning myrmecophagous and feeding on the early stages of the ants. However, the ants also farm coccids and alternatively there is a possibility that the A. brisbanensis larvae may feed on the immature stages of the coccids.

The larvae are believed to spend their entire life period inside the nests of the small dark-brown byre building ant Papyrius (Iridomyrmex) sp (nitidus group).

Very small (0.55 mm), initially white, later turning greyish white, hemispherical when laid but becoming subconical, with a very fine reticulated pattern. On the sides the reticulation pits are deep trigonal shaped (ordered into hexags), but dorsally the pits become variable in shape and smaller as they compensate for decreasing space and the hexagonal pattern is lost. On the sides at each facet intersection there is a short raised blunt spine. The egg is apically flattened and covered in very small irregular shallow facets without raised spines, and the micropylar area is tiny. The eggs are very similar in morphology to the eggs of Paralucia. A female has been reported to lay several eggs on a small dead Eucalyptus stump containing a nest of the Papyrius ant.

Not yet recorded, although the greyish colour of the mature egg would suggest the first instar larva would be greyish coloured. Mature larvae of similar species are greyish cream, brown or green and brown coloured, long onisciform shape, usually bearing a few bristly hairs on each segment, and with the head being small, smooth, black or brown, hidden beneath the body.

Pupae of related species are smooth, long, narrow, cylindrical, rounded anteriorly and are dull black or brown, sometimes with brown markings on the abdomen.The empty pupal skins of these species are destroyed by the ants after the adult butterflies emerge.Their pupal period varies from 3 to 12 weeks.

The only South Australian records are for late October to mid December, and again late February. In nearby Victoria it is probably single brooded with a staggered flight, flying from early November to mid-March with the main flight period in December and January.

In South Australia the butterfly (pale form) has only been encountered in the Upper Southeast Region. It has also been recorded in the adjacent Little Desert and Grampians area of western Victoria, and again at a single location just to the north of Perth in Western Australia.The dark brown form is more commonly encountered along the Great Dividing Range in the eastern states. The butterfly uniquely utilises the same Papyrius ants that are utilised by Hypochrysops ignitus, and as the two butterflies are found in similar habitat, it is therefore likely that Acrodipsas brisbanensis will have a similar range as that butterfly. If the more common H. ignitus is ever encountered then A. brisbanensis should also be looked for at the same time, particularly on the top of any nearby pinnacle hills or large dunes.

There is also another very rare Acrodipsas, A. myrmecophila that also utilises these Papyrius ants, but which has yet to be recorded from South Australia. By similar reasoning, there is no reason why this butterfly could not occur where the other two butterflies are found. This butterfly looks similar to A. brisbanensis, but is slightly smaller and the wings are rounded. However, it requires moist habitat.

In the eastern states the butterfly is usually seen in pristine open forest and tall woodland habitat having annual rainfall greater than about 500 mm. In South Australia its occurrence is in pristine, broad-acre mallee habitat having annual rainfall of 450 mm. A pinnacle dune or hill top, with at least one bush or tree occurring at or near its apex is almost an obligatory habitat requirement. Further suitable habitat would appear to be present in South Australia, particularly in the Mt Lofty and southern Flinders Ranges, and on southern Eyre Peninsula.

Very local in distribution in South Australia, and considered very rare, although its only known site is theoretically secure in the Ngarkat Conservation Park. This site was burnt out after the first recording of the butterfly, but recently the butterfly has been seen flying again. Not threatened in the eastern states.

The butterfly does not adjust very well to agricultural and urban development. Hilltops in urban fringe areas are often targeted for housing and communication towers. Similarly, the indiscriminate placement of giant wind turbines on hilltops without first assessing the environmental impact on this and similar hilltop dependant butterflies would likely cause these butterflies to suffer, with even irreparable population damage. The butterfly's main threat in conservation areas is likely to be 'hot' bushfires, but it can survive 'cool' bushfires similar to Ogyris halmaturia when the early stage colony is located and insulated in stumps below ground. It is believed to be totally dependent on the one species of ant, which is itself rare, and usually dependent on undisturbed habitat. As the butterfly's early stages survive off the living resources of the ant colony then the survival of the butterfly is very much dependent on the well-being of the ant colony. Ant colonies would be disrupted by the diggings of large burrowing animals, particularly rabbits, but also bandicoots, wombats and echidnas. A proliferation of bird life could also be a potential threat to the butterfly due to its dependence on hill topping, that places it in a situation where it can become vulnerable to repetitive bird attacks. The butterfly is also under threat from the impact of butterfly collectors due to its rarity and unique relict-population status.

The butterfly requires broad-acre pristine habitat for survival. Pinnacle hilltops would be required for colony stability and the incorporation of elevated areas into conservation reserves would be necessary for the survival of this and many other threatened butterfly species. Full due-process is required in the assessment of environmental impact statements (if they occur at all) for the placement of wind turbine farms. As the South Australian population is known from only a very limited area, collectors need to control their urge and collect no more than a pair, (even though the butterfly is protected! ) 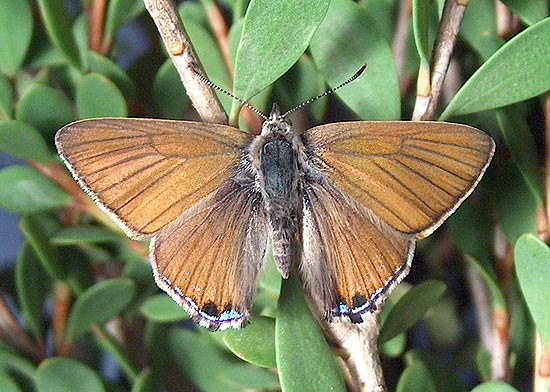 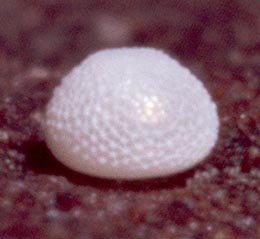