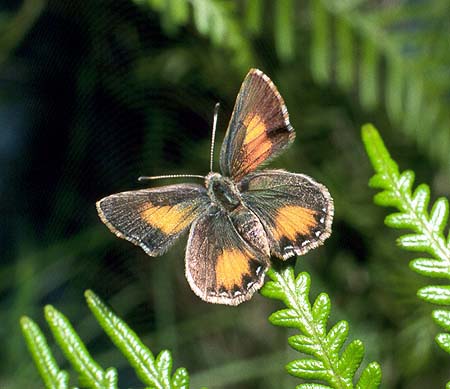 These small butterflies occur near their foodplants where they are usually seen sunning themselves with opened wings. The common name can be misleading, as the butterflies are not very obvious with wings opened, due to the small areas of orange on the uppersides of the opened wings. They are very similar to their close relative Paralucia pyrodiscus with which they sometimes fly. Both sexes of P. aurifera can be differentiated from P. pyrodiscus in that they possess a series of blue-white subterminal spots at the edge of the hindwing upperside. Female P. aurifera also possess a large orange area on the forewing underside. Males of both species have stubby hindwing tornal tails, which differentiates them from other Australian coppers.

P. aurifera has a rapid flight but of short duration, sometimes reminiscent of skippers. An elusive butterfly, it occurs in well-defined small colonies that can exist for many years if left undisturbed. Males will establish territories in sunny areas near the breeding grounds by perching on the foodplants or other low bushes, bracken or fallen wood debris, or sometimes even on large stones or the ground. Females are more often seen close to the ground in sunny areas. In forest areas their flight occurs mainly during the middle of the day when the sun has maximum penetration through the tall canopy. When settled, the butterflies are easily approached. If startled they fly only a short distance before settling again.

The butterfly has yet to be recorded in South Australia, but is known to occur in southwest Victoria 35 km from the SA-Vic border, and so it is possible this butterfly may eventually be found in SA.

Small, initially greenish white, later turning white, sub-conical, with a very fine reticulated pattern. The reticulations are trigonal (ordered into hexags), and at each intersection there is a short raised spine. The egg is apically flattened with a depressed micropylar area. Laid singly or in small clusters, usually within the new growing tips of the foodplants, but also sometimes on older leaves or on the young stems. The eggs start to hatch after about 7 days in late spring.

Females prefer to lay eggs on small plants below 1.5 m in height, and actually choose plants or a site on the plants that lack an active presence of the attendant ants. The ants colonise (or recolonise) the plant once the larvae are active, which they do by building a network of below-ground chambers at the base of the foodplant that are separate from the main ant nest. These chambers provide protected resting places for the larvae during the day and eventually sometimes the pupae. At the beginning of the flight season the foodplants are rarely seen to have attendant ants.

The first instar is long onisciform shaped, pale yellow with a broken, reddish subdorsal line. The posterior dorso-lateral organs are not developed. The head is small, smooth, dark yellowish brown, hidden beneath the body. The prothoracic plate is very large, dark brown coloured with about three short pairs of dark, forward directed hairs, the dark anal plate is small. There are long peripheral white setae, which are longest posteriorly. There are paired, long black recurved dorsal setae, which are very long anteriorly and then gradually decrease in length posteriorly along the body until the last posterior segment where they become very long again. They occur on thoracic segments (TS) 2 and 3, and on the first six abdominal segments (AS) and again on the last. On the 7th AS there is a short pair of flattened white setae directed to the rear. After eating the foodplant, the larvae gradually become greenish anteriorly, and whitish dorsally, and aquire narrow reddish dorsal, subdorsal and lateral lines. They feed initially by scouring the leaf cuticle from the leaves of the foodplant, but after about the second instar they will eat the entire leaf.

Intermediate instars are onisciform (slater shaped) and gradually lose the long dorsal setae and gain the posterior dorso-lateral organs, and are brown coloured similar to the final instar. The prothoracic plate remains large and black coloured. Tiny secondary setae become increasingly numerous which give the larvae a scabrous appearance.

Larvae feed at night accompanied by attendant ants, and hide during the day in cavities made by the ants beneath the ground around the base of the hostplant.

In southwest Victoria the butterfly has an extended flight period from about October to March, the result of continuous broods, which can be completed in about 10-13 weeks. Elsewhere in Victoria there are additional records in August, September and April. Eggs laid during autumn produce the next spring flight. It overwinters as larvae. However, as with most colonistic Lycaenids there can be staggered larva development and there are records in captivity of eggs laid in spring producing larvae that required a full year for development.

The butterfly has yet to be recorded in South Australia. It occurs in southwest Victoria, 35 km from the SA-Vic border, and so it is expected that this butterfly may eventually be found in SA, either as vagrants or small resident populations. The range of the butterfly extends throughout the moist montane and coastal areas of Victoria, NSW and southeast Queensland. It is also found in eastern Tasmania.

The butterfly has a preference for cool, damp (often leech prone), shady, temperate forest areas receiving more than about 750 mm of annual rainfall. It requires open sunlit areas and the understorey to be open and not overly congested by bracken and tea-tree, or similar plants.

Likely to be extremely rare and localised if found in South Australia, although in the adjacent areas of Victoria where there has been a better retention of native forests, the butterflies can be locally common.

Suitable cool, moist, tall forest habitat with an uncongested understorey is now extremely rare in SA. Such habitat was long ago fragmented and degraded, or turned into pine plantations. The remaining areas are now under constant threat from bushfires and understorey degradation from the invasion of bracken. Bushfires, drought, and urban and forestry expansion would likely be the main threats under present conditions.

If colonies of the butterfly were found, then they would need to be monitored to prevent invasion by choking exotic weeds to their habitat. Toxic agricultural and forestry insecticides and weedicides used in adjacent areas would need to be judiciously applied, particularly those sprays distributed by aerial means. The butterfly should be a good candidate for reintroduction into conserved areas. 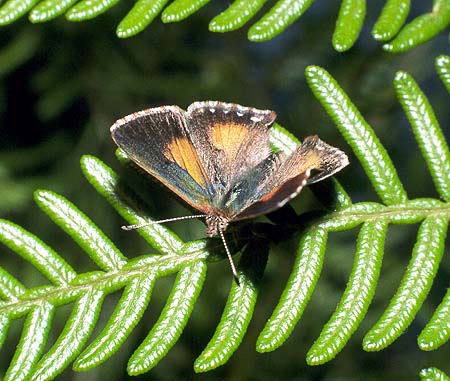 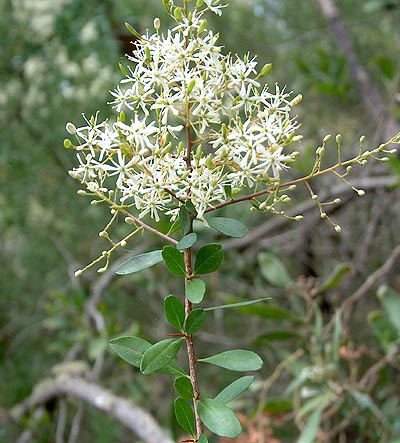