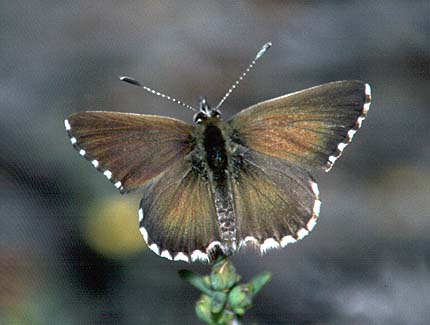 One of the drabbest butterflies to be found in South Australia. It belongs to a small group of very similar species that range through much of southern temperate Australia and Tasmania. They are endemic to Australia, and had their origins in ancient Gondwanaland. As for all Lycaenids, the sexes are sexually dimorphic in morphology on the wing uppersides. However, in this species the difference is not obvious as both adults are brown coloured. The male has a bronze sheen, while the female is paler.

The flight is reasonably fast, with the butterflies flying below 1 m. The butterflies normally fly very close to the hostplants. During the morning, males will fly about the hostplants looking for newly emerged females with which to mate. Males also commonly hilltop or dune-top, where there are often territorial battles between rival males seeking a prime waiting position. The females are slower in flight, and they spend much of their time searching for places on the larva hostplants to lay eggs. Both sexes can be readily approached when settled.

It is one of the few butterflies in Australia that have eggs which remain dormant over both summer and winter.

Larvae are sometimes attended by a few small dark brown and black ants Iridomyrmex species. However ants are not an obligate necessity, and often the larvae become agitated with ants around and will attempt to dislodge them if they actually crawl onto the larvae.

Small, initially pale green, later turning white, shaped like a cogwheel, flattened top and bottom. There are essentially four major, horizontally stacked circular ridges, which intersect with numerous vertical ridges. Coarse, blunt projections are produced at the pattern intersections. There is a reduced basal ridge, and two large, equal sized horizontal central ridges (the outer edge of the cog wheel), while the uppermost row is much reduced in extent and is closer to the micropylar area. The reticulation facets on the edge of the egg are deep, and rectangular shaped. The bottom of the egg has very fine hexagonal reticulations. The top central part of the egg is not ridged and is deeply depressed, and also has fine reticulations that are mostly hexagonal shaped, which continue to the micropylar area in the centre of this depressed area.

Laid singly on new hostplant growth in the outer parts of the plants, often wedged into the crevice between two branching stems, but also in other crevices within the bark of the hostplant in its outer parts. This position would provide protection from rain and wind induced rubbing movements, but those eggs laid in the crevice between two stems could be dislodged in late winter by newly developing bud growth. The eggs can also be laid along the stems but these eggs are not protected, although the cementing or gluing medium at the base of the egg is very strong. Larva development occurs immediately after the egg is laid, but once developed the larva (and egg) then diapauses (becomes dormant) until the following late winter and early spring when the larva hostplants start to flower. The trigger for egg hatching is probably due to an increase in daylight hours and additional day warmth after winter, although there may also be a genetic time-clock component as well. The larvae do not always synchronise their emergence with the flowering of the hostplant and those that emerge too early have to survive on young leaves and green-buds until the flowers develop. In Australia, the unusual egg shape is confined to the genus Neolucia and the shape is unique to this genera of butterflies. (It may be the optimum shape for eggs that undergo a hot summer and cold winter dormancy period, to stop them from collapsing.)

The first instar is onisciform shaped, initially pale yellowish grey or brown, with a large pale brown coloured prothoracic plate. There is an indistinct dorsal furrow, and there are transparent peripheral setae (hairs) that are directed downwards. These hairs are slightly flattened and have distinctly blunt ends. There are paired, very short transparent dorsal setae on each segment that are flattened and club shaped, and which are flattened against the body and directed posteriorly, and they also become slightly larger posteriorly. The head is large, exposed, and black coloured. (The first instar is remarkably similar to that of Nacaduba biocellata, even though the adult butterflies look completely different).

As the larvae increase in size, they acquire multicolours, and dorsal protuberances, which become more developed with maturity. They can change their colour during their lives such that a green coloured larva can become orange or brown after a moult. The larvae gradually lose any dorsal and lateral hairs, and the head eventually changes to a brownish yellow colour by about the fourth instar.

The mature larvae are about 11-13 mm long. Dorsally furrowed, with short blunt paired protuberances on thoracic segments 2-3 and abdominal segments1-6, that are widely spaced near the head, but gradually come together towards the posterior end. The lateral edge of the larva is weakly scalloped. The head is small, smooth, brownish yellow, hidden beneath the body. The body has some short, anterior and posterior hairs. It is covered in numerous tiny secondary setae having a stellate base (about 8 spines) and a long protruding serrated and pointed central (usually curved) spine. These setae are coloured and contribute to the colour pattern of the larva. The larvae are polymorphic (i.e. they occur in many colour forms). Larvae colour and markings are highly variable and picturesque, with the predominant colour being either green, pale brown, or orange-red. The colours become dull near the point of pupation. There is always a narrow dark longitudinal dorsal line, and a white lateral line that extends from thoracic segment (TS) 2 to the anterior edge of the last abdominal segment (AS). The white lateral line is usually broadly edged with red dorsally. There is a broad continuous pale (white or yellow) subdorsal line extending from TS 2 to AS 6, but which becomes indistinct posterior of AS 6. On the posterior edge of TS 1 the white lines are joined by a narrow black or dark red line. The summit of each dorsal protuberance is usually marked red. The anterior part (TS 1) of the larvae is sometimes noticeably red, and there is sometimes a further indistinct white longitudinal line between the white lateral and subdorsal lines. The larvae colours are cryptic and blend in with the buds, flowers and stems of the hostplant, such that the larvae are virtually invisible to the human eye.

Larvae feed openly during the day as well as at night. The larva is immobile when feeding on the flower bud. When immature it eats a small hole into the side of the bud, then progressively inserts its head (and sometimes the forward part of its body) into the bud and gradually eats out the stamen contents until the bud is reduced to an empty shell. The larva then becomes mobile again as it moves to the next bud. Larger larvae will completely envelop the bud with the forward part of its body before eating the entire bud. Young shoots and pods are also sometimes eaten when the buds are in short supply. The larva stage lasts about 4 weeks.

The presence of larvae on a hostplant is discernible by holes in the flower buds and flowers, or by the complete loss of the buds, and sometimes by the presence of small ants. The flowers of the hostplants harbour many small bug and spider predators, and it is likely many of the immature larvae get eaten. Larvae are also prone to parasitisation by large flies, which usually have destroyed the larvae by the fourth instar.

Short cylindrical, about 8-10 mm long, rounded anteriorly and posteriorly, with short pale bristles on the head, thorax and abdomen. Occurs in shades of brown, grey-brown, orange-brown or yellowish-brown, with the colour being generally dependant on the substrate or the initial larva colour. The wing areas tend to be greyish. Very finely speckled with dark brown markings, and there is a dark brown longitudinal dorsal line. There is also an incomplete double row of subdorsal abdominal spots. Attached to the silked substrate by anal hooks and a weak central girdle. Pupation occurs either on the hostplant if there is enough leaf matter on the plant to provide camouflage, or to vegetal debris beneath the hostplant. In the latter situation the larvae will construct a flimsy cocoon or web-shelter (similar to some Ogyris) within which to pupate. In sandy country they will actually force themselves into the loose sand to pupate if there is not enough debris about. Those pupae that occur on the hostplant are easily dislodged due to the weak silken girdle. The pupa stage lasts about 10-19 days.

The flight season starts in mid September and continues into December, with the flight starting slightly earlier in hot northern areas, generally coinciding with the flowering of its hostplants. In South Australia the butterfly has only one generation in a season.

The butterfly occurs in semi-arid and temperate areas of the state including Kangaroo Island, wherever its preferred larva hostplants occur in sufficient density. There is a record from Immarna, where it is likely to occur only during good seasons when its hostplants are in flower. Also recorded generally from southern temperate and sub-alpine Australia and Tasmania. Different subspecies occur in WA and Tasmania.

In South Australia the distribution of the butterfly generally follows the distribution of its preferred hostplant Eutaxia microphylla, which occurs mainly in mallee habitat (dryland Eucalyptus woodland), coastal cliff-heath, and habitat on the dry side. The butterfly prefers open habitat. It has yet to be been seen in the high rainfall woodlands and forests in the Lower Southeast Region of the state (where its preferred hostplant does not occur), although it is likely the butterfly will eventually be found as bush-peas grow in the region. The butterfly can tolerate diverse climatic conditions, from semi-arid to sub-alpine.

No major threats. Its mallee habitat is still widespread. The butterfly is only threatened in areas of urbanisation and agricultural disturbances.

None required. Its preferred hostplant is widespread and common in mallee remnants. 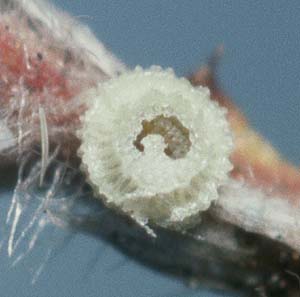 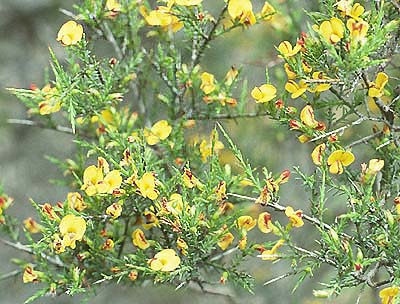 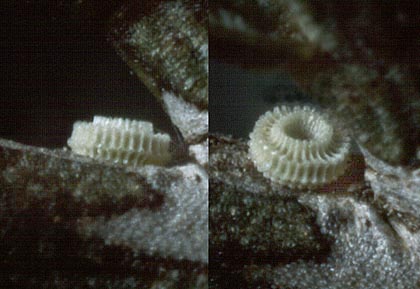 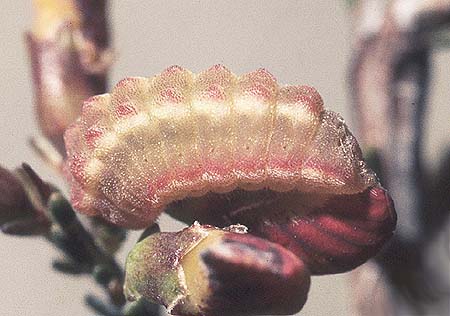