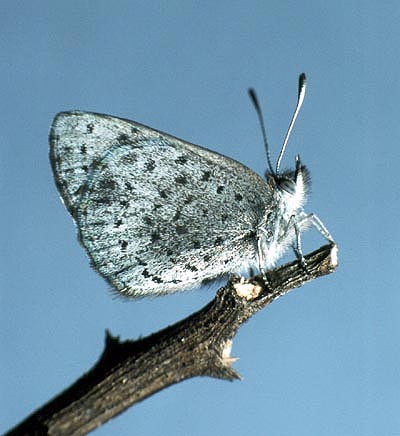 Species name has been updated from Candalides acasta to Erina acasta (Cox). Please report any ongoing issues to web@butterflyconservationsa.net.au.

A dull and generally inconspicuous small lycaenid. The butterflies normally fly very close to the hostplants, but males also have a strong preference for hill topping, especially when females are scarce.

Males set up territories on dune-tops and hilltops, from where they make frequent forays, either to adjacent hostplant areas to look for unfertilised females, or to fend off other males, but always returning to their territories. They perch on low twigs or bushes in these territories with wings either open or closed, usually less than 1 m from the ground. Females are usually seen flying near the hostplants where they are constantly searching for a good place to lay eggs. Flight normally occurs below 1 m, and is reasonably fast in males, but slow in the females when they are looking to lay eggs. If disturbed, the flight is fast and direct.

Like all Lycaenids, the sexes are sexually dimorphic in morphology on the wing uppersides. In this species the difference is very clear, with the males being dark coppery purple coloured, while the females have broad blue inner areas. The intensity of the blue in the females varies in some localities. Near Adelaide the uppersides are grey with dull blue areas, while in some other areas such as southern Yorke Peninsula the uppersides are black with bright blue areas. The wing underside colour is a dark cryptic grey, which provides some camouflage when settled, but is probably more useful as camouflage when in flight. The underside is similar to the related Candalides hyacinthinus and both butterflies can occur together. The latter differs by being larger, although in flight it is sometimes difficult to tell them apart.

Both sexes of E. acasta can usually be approached with ease when settled.

The larvae are usually not attended by ants, although in some areas they may be accompanied by one or two small ants.

Small, initially pale green, later turning white, hemispherical, top rounded, base flattened, with a coarsely reticulated, raised pattern which is continuous to the micropylar area. The reticulations are irregular, consisting of shapes varying from quadrangular to hexagonal, with each reticulation intersection having a small raised blunt projection. Laid singly on the hostplant, usually on the flower buds, but sometimes on the tendrils. The eggs hatch in about 4-5 days in summer.

The first instar is initially, pale yellow. After eating, it changes colour to greenish yellow, and eventually acquires some pinkish markings. Onisciform shaped, and the head is large, smooth, yellowish green, hidden beneath the body. The posterior dorso-lateral organs are not developed. There are long dark dorsal setae, and long pale peripheral setae that are longest anteriorly and posteriorly. Dorsal setae occur in two pairs, one pair being long and recurved, the other pair being short, recumbent and directed to the rear. Later intermediate instars are similarly coloured to the final instar, and gradually lose the long hairs.

The final instar is about 11-12 mm long, onisciform shaped with a weak thoracic dorsal furrow, the lateral edges are only slightly scalloped, the anterior end is rounded, the posterior end is flattened and pointed (angular), and there are some short dorsal and peripheral hairs.The head is small, smooth, greenish yellow, hidden beneath the body. The body is covered in numerous, minute, dark coloured secondary setae having a protuberant,angular and ridged base and a long, serrated and pointed central spine. Coloured in some shade of green, with dark green dorsal and subdorsal lines, the latter stopping short of the final posterior segments and which is broadly edged dorsally in white or pale yellow. The area between the dorsal line and the white edging is infilled with a paler green colour than the rest of the body, giving the colour effect of a broad dorsal band. There are sometimes additional pink markings anteriorly and subdorsally. The larval period is about 3-4 weeks in mid-summer.

Larvae generally feed at night, hiding during the day in leaf debris within the hostplant or on low herbage of the hostplants near the ground. A larva is very immobile when feeding on the flower bud, which it does by initially eating a small hole into the side of the small bud then progressively inserts its head (and sometimes the forward part of its body if it is still an early instar), into the bud and gradually eats out the stamen contents, until the bud is reduced to an empty shell. The larva then becomes mobile again as it moves to the next bud.

Have a shape typical for the Candalides tribe, but more narrow than usual and with less ornamentation, about 8-10 mm long, roughly triangular in cross-section, with a weakly developed abdominal dorsal ridge. A divided pointed dorsal projection occurs on the thorax. The lateral part of the abdomen and anterior edge of the head is flattened, with the head flange divided at the front and noticeably extended anteriorly. Greenish at first, but later turning to various shades of pale brown or grey, with additional darker brown and black fine cryptic markings, sometimes with a dark brown dorsal line, and there are also some black markings along the edge of the abdominal flange. The dorsal bifid projection is white. Weakly attached by the cremaster and a central girdle, to dead leaf and other debris within or around the base of the plant, or beneath the bark of the host plant. The pupae are easily dislodged, so many must end up on the ground within leaf debris. The pupal period is variable, and can be as short as 9 days in summer, but pupae produced in late summer and autumn, usually remain dormant until the following early spring.

The butterfly flies from early August to early May. Main flights tend to coincide with the flowering of the hostplants, which are necessary for the larvae to mature. As a brood can be completed in about 5-6 weeks, it is likely there are three or more broods completed into late summer, so long as the hostplants are still producing flowers. Some male butterflies also hibernate over winter, reappearing on the odd warm day to sun themselves and have a feed.

The butterfly is usually found wherever its hostplants occur in sufficient density, and these are widespread and locally common. It also occurs on Kangaroo Island. In the Flinders Ranges it occurs on the high plateaus. It is usually very rare in the Lower Southeast Region, but can sometimes be locally common along the coastal dunes if its hostplants are present. Also recorded generally from southern temperate Australia, including Tasmania.

In South Australia its hostplants grow in a variety of habitats, but particularly in heathland/shrubland, woodland and the wetter mallee, and they seem to require a minimum annual rainfall in excess of about 300 mm. The butterfly favours the more pristine habitats of its hostplants.

Its main threats are from bushfires, urban development and agricultural activities. The parasitic hostplants are sometimes considered damaging to other plants, particularly in the urban environment, and are therefore removed.

Healthy native trees seem to be able to tolerate the parasitic dodder hostplant, and there is usually a self-induced balance between the tree host and the dodder. If there appears to be an imbalance in the urban environment, then it may be possible to thin out some of the dodder, rather than remove it totally. An active Candalides colony will help keep the dodder pruned or considerably reduce the amount of fruit it can produce. Dodder forms an important part of the remnant flora of road verges, and these should be left alone as they sometimes contain small colonies of the butterfly. 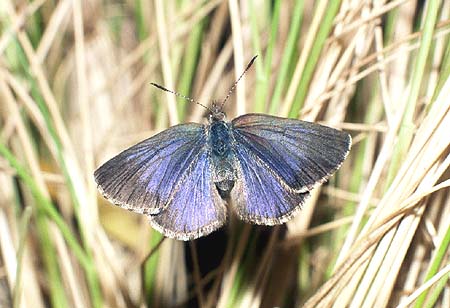 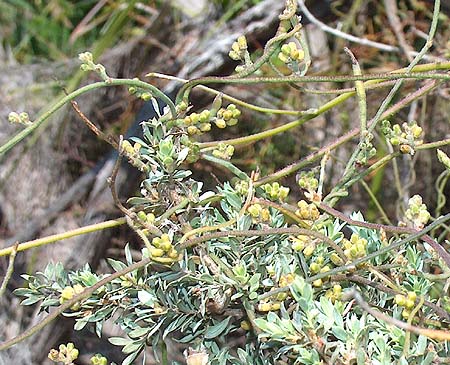