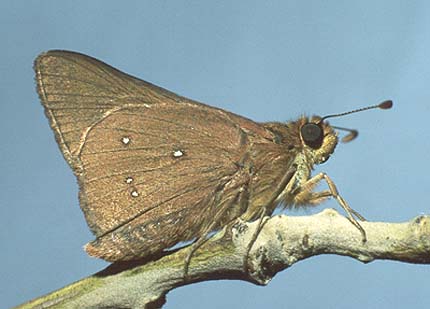 This is another dull-brown skipper, which possesses a uniform brown colour beneath offset by four conspicuous white spots on the hindwing that differentiates it from most other skippers. It is a reasonably large skipper and capable of very fast flight.

Both sexes spend a lot of time feeding from flowers near ground level, especially in the mornings. Early in the mornings the males tend to occur in the canopy of trees to acquire the warmth of the sun, but soon come to ground to feed on flowers (if the trees are not in flower). If there are no elevated areas near the hostplants then the males will set up territories on bare patches of ground, rock or sand within or near the hostplants, or sometimes on low dead twigs, or sometimes on adjacent tracks, and wait for newly emerged females to fly into the area for mating. If there are adjacent hilltops or dune-tops to the hostplants then the males will collect there, establishing their territories on the ground. They are reasonably well camouflaged when settled on the ground due to their dull colour, but their large size usually makes them conspicuous. The males will periodically fly off to either patrol nearby areas looking for new females, or to chase off other males. Once mated, the females fly in hostplant areas, and have a slower flight when in an egg laying mode, particularly when they are heavy with new eggs, but will periodically land on the hostplant to lay eggs, and will cover large areas looking for suitable habitat to lay eggs. The skipper is timid, but can be approached with care when settled.

On Kangaroo Island the skipper can occur in both mallee woodland and coastal heath. In the former situation where the mallee is typically dense, it may not be seen during the normal course of the day but late in the afternoon may suddenly appear in small numbers at the edges of the woodland to feed at low growing flowering bushes. There they will quickly feed at the flowers and then just as quickly disappear back into the mallee. On the coastal heath where the shrubs are kept wind-pruned to less than 30 cm, they can occur on the severely windswept high cliffs at the edge of the sea. The males in particular occur in this situation where they set up territories on any low rise, either on the low bushes or on the ground. Those skippers occurring on Kangaroo Island and the elevated parts of the Fleurieu Peninsula have hindwing morphologies that are much brighter than other forms of the skipper.

The skipper (believed to be this species) has recently been recorded from the Merty Merty area of the Far Northeast region of the state. Surprisingly, considering the implications of thermoregulation, this record is of a much darker form than those occurring in temperate areas to the south. (Its presence in this area requires further confirmation.)

Lepidosperma carphoides (black rapier-sedge), L. concavum (spreading sword-sedge), L. viscidum (sticky sword-sedge), Schoenus spp (bog-rushes) (Cyperaceae). The larvae use L. carphoides in sand based soils, particularly dune areas, and L. viscidum in areas with heavy soils or in rocky hills. The latter sedge has narrow, erect strap-like stems and leaves, while the former has wiry stems and leaves and grows like tussock grass. (L. carphoides is readily distinguished in the field from other wire-leaf sedges by having small, black coloured, single flower heads shaped like a flying bird.) The female has an egg laying preference for young or small plants. L. viscidum is the preferred hostplant. The skipper is not known to use L. concavum in South Australia, even though it is a common sedge growing in soils that are sand based. The larvae eat the leaves of the hostplants. Its hostplants in the Far Northeast are unknown.

Very large 2.0 mm (along the long axis), pale yellow, hemi-ellipsoid (but nearly hemispherical), base flat, with numerous very indistinct vertical ribs, numbering about 29-35, and laid singly on the hostplant. The eggs do not acquire red markings if fertile. The small micropylar area on top of the egg is depressed. Eggs are usually laid on hostplant situated in full sun, and are only laid on living, green leaves of the hostplant. Larva development within the egg commences immediately after being laid, and larvae begin to emerge after about 23 days in spring. The egg shell is eaten by the larva after its emergence.

The first instar is long cylindrical, initially pale yellow but gradually turning yellowish green after eating the hostplant, the anterior and posterior ends are dark pink, and the head is black, large shining, slightly rugose, having a few long hairs, the prothoracic plate is black but the surrounding neck area is dark wine red coloured, and long recurved hairs occur posteriorly. After eating the egg shell, the young larva moves off to the congested lower parts of the hostplant and makes a small shelter by either silking together several leaves of the hostplant or by making a loose webbed shelter against a larger leaf. The young larva rests in the shelter during the day with its head pointing either upwards or downwards. It eats at night by feeding on the outer parts of the leaves. The shelters are open ended initially, but in later shelters the basal part is sealed.

Subsequent instars gradually lose the long posterior hairs, but retain a similar body colour throughout their life. New shelters are periodically constructed to fit the growing larvae, using the leaves of the hostplant if the hostplant is dense enough, and the internal diameter of the shelters is approximately the diameter of the larvae. With L. viscidum the shelters are nearly always at the base within the congested area of leaf growth, and are rather simple. Intermediate instars make a loose webbed shelter on the sides of the leaf bases, but the final shelter is usually deep within the leaf bases. However, most of the egg laying by the females is done on very small plants, which cannot support shelters of the mature larvae and the latter have to build shelters in leaf debris or similar material on the ground near the hostplants. With L. carphoides the shelters are usually made in the outer parts of the sedge and are more elaborate, utilising many wiry leaves to construct a straight or slightly twisted elongated tubular structure 7-10 cm long that opens at the top, and which is strongly lined with silk internally. Larvae continue to rest and hide from predators within the shelters during the day with their heads directed upwards, and emerge to eat briefly at dusk (usually) or late at night, eating leaves from anywhere on the plant. They eat the L. viscidum leaves by eating from the leaf edge inwards towards the centre of the leaf (without eating through to the other edge) while they remain positioned on the basal part of the uneaten edge of the leaf, leaving a characteristic sharp, straight eat mark on the leaf. The start eating from near the tip of the leaf, and work their way back down towards the leaf base, and usually continue to eat from the single leaf blade until they reach fourth instar stage. (Larvae of most other species of skippers eat while stationery on the already eaten portion of the leaf.) They grow slowly, and pupation occurs in the final shelter during late winter or early spring.

The presence of larvae on or near the hostplant is discernible by either, the characteristic eat marks on the broadleaf hostplant Lepisosperma viscidum, or in the case of the wireleaf Lepidosperma carphoides by a large shelter in its outer parts and a number of chewed-off leaves near the shelter.

Long cylindrical, about 22-24 mm long, dark brown and pale yellowish brown, with the abdominal area being pale yellowish brown, and with brown posteriorly directed abdominal bristles, which arise from depressed bases. The posterior end tapers to a short, rounded or squared, dark brown cremaster, having brown coloured, long, posteriorly directed bristles. The head is rounded, with the head cap (operculum) being black, having a characteristic rounded shape, and there are some short hairs. The central part of the operculum is heavily sclerotised (very rugose) and is divided into three equal sized, oval shaped segments, a single ventral part, and two dorsal parts that are elevated (in profile) above the ventral part.

Pupation occurs in the final larval shelter, and the larva pupates with its head directed upwards. The pupal duration is about 36-42 days in spring. The empty pupa case remains inside the shelter after the adult skipper emerges, and is dark brown coloured.

The skipper is single brooded in southern temperate areas and has a short flight in spring lasting about one month in any single locality. The flight commences earlier in the northern temperate areas. The skipper overwinters as larvae. In the Far Northeast of the state it has been recorded as flying in April.

The skipper usually occurs wherever its principal hostplants grow in a high enough density, and that includes most of the southern agricultural belt, and also Kangaroo Island. In the northern Flinders Ranges it normally occurs on the high plateaus where it's known hostplants survive. In the Far Northeast where a single female has been recorded from the Strzelecki Creek it is not known if the skipper is a permanent resident in this area or whether it has taken advantage of a moist season and temporarily expanded its range from the northern Flinders Ranges along the ephemeral creek systems, or whether it is an accidental transport. It has yet to be found in the high rainfall areas of the Lower Southeast Region, and although most of the suitable heavy soil habitat in this area has now been cleared, there are still sandy soil areas containing L. carphoides. This subspecies of the skipper is also known to occur in western Victoria. Other subspecies occur in NSW and southwest WA.

The skipper requires broad acre pristine habitat, where it will occur wherever its principal hostplants are growing, and that includes heavy soil and rocky hill areas for Lepidosperma viscidum, and sand based soils for L. carphoides. These habitats include mallee and open woodland areas. Males are very active hilltoppers and prefer habitat containing elevated areas, although it is not a habitat prerequisite. Much of its preferred habitat has now been fragmented due to agricultural and urban development. In the Far Northeast its habitat is probably the ephemeral desert waterholes of the Strzelecki Creek. The surrounding desert consists of dune fields.

The skipper is widespread in distribution. It is very rarely seen in flight in the moist woodlands of the southern parts of the agricultural belt, but is still maintaining a locally common status in the pristine mallee remnants either within the large mallee dominated conservation parks of the Upper Southeast and Southern Eyre Peninsula Regions, in northern rocky hill areas of northern Eyre Peninsula, or in the southwest part of Kangaroo Island, and collectively on that basis is considered to be local.

The main threats are from bushfires, and the effects of agricultural and urban disturbances. Much of its preferred habitat is now fragmented and the skipper has been unable to recolonise many of these areas after bushfires or degradation. Habitat adjacent to farming areas is susceptible to toxic spray drift, especially when it is applied by aerial means.

The skipper requires broad acre pristine habitat for survival, but so long as there is no further degradation or clearing of remnant vegetation in its distributional areas its populations should remain stable. 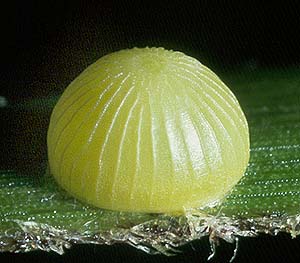 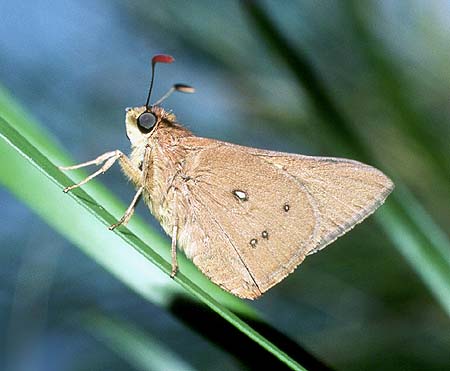