A large, magnificent skipper with a wing expanse to 50 mm. It is one of the larger skippers to be found in Australia, and the largest to be found in South Australia. It has a very rapid flight and sometimes a distinct hum can be heard as it whizzes about. Similar size skippers of other species have been recorded flying at around 90 kph. When not feeding, the males set up territorial perches on low plants or sticks within open sunny areas of the forest near the hostplants, awaiting the newly emerged females, while fertile females cruise around looking for hostplant on which to lay their eggs. The males will occasionally venture to hilltops but not to the same degree as most other members of the genus. Both sexes will leave the hostplant areas to find nectaring plants to feed on, and will fly into cleared habitat fringing the forests to find these plants. Once refueled they return to the forest. On very hot days the skippers will congregate together in cool, shady areas deep within the forest.

They are usually not very timid and can be approached with care when settled.

Large, initially pale yellow, hemi-spherical (domal) with strong vertical ribs numbering 21-24. If the egg is fertile, then after a couple of days it acquires a large red-brown dorsal spot and a jagged red-brown lateral band. Eggs are laid singly anywhere on the hostplant, usually on plants situated in partial shade. Larval development within the egg commences immediately after being laid. The egg shell is eaten by the larva after its emergence.

The first instar is initially pale greyish yellow with longitudinal dark brown lines, and has a large slightly rugose black head with a few long hairs, the neck (prothoracic plate) is black, and long recurved hairs occur posteriorly. The yellow colour gradually becomes green as it eats the hostplant.

Subsequent instars gradually become brownish, and lose the longitudinal lines and long hairs, and the head becomes brown and eventually acquires the pattern of the final instar.

The final instar is about 35-40 mm long, fat and humped, pinkish-brown with a darker dorsal line and further indistinct longitudinal subdorsal lines. The head is large, rugose, strongly notched at the top, dark brown with a broad inverted orange Y mark on the front, edged yellow, and with very short, curved flattened setae. The body is without long hairs, but bears numerous wine-glass shaped secondary setae set on simple smooth raised bases. These setae impart a rough scabrous appearance.

Larvae construct shelters opening at the top, initially near the base of the hostplant, by joining several hostplant leaves together to form a tight, silk lined tubular structure. Later they may use loose extraneous curled leaf debris within or around the base of the hostplant. They feed at night, usually very late at night, hiding from predators during the day inside their shelter. The presence of larvae on the hostplant are readily discernible by the distinctive large jagged eat marks along the upper edges of the strap-like leaves. The larvae feed throughout winter and spring, and pupation takes place in early summer. The larva stage can require five or six instars to maturity.

Brown with darker markings, long cylindrical and fat, about 25-28 mm long, head rounded and very rugose. There is a pair of large black half crescent shaped raised areas situated subdorsally behind the head. The head cap (operculum) has two unequal pairs of small protuberances, the most anterior pair being larger and have a short blunt horn shape, while the smaller more dorsal pair are rounded and black spotted. The abdomen, thorax and parts of the head are bristly, with the setae being flattened and hockey stick in shape. The cremaster is black coloured, very long, curved and spinose. Pupation occurs either in the final larval shelter on the hostplant, or more usually the larva may leave the hostplant to pupate, sometimes many metres distant from the plant. The pupal duration is about three weeks.

Early January to early March. Only one brood a year.

In South Australia it is confined to the Lower Southeast Region, and is found only where its hostplant occurs. It occurs in similar habitat to Trapezites eliena, but is very local in its distribution and is presently only known from four areas. The local subspecies of the skipper is also found in western and central Victoria. Two other subspecies occur coastally in the eastern states and in the eastern Great Dividing Range as far north as central Queensland.

Usually occurs in open forest containing its hostplant, which requires moist conditions. Prefers its hostplant to be in partial shade and uncongested by other plants.

The skipper is confined to the remaining habitats of its hostplant, which is subject to the continuous threats of urban, agricultural and forestry requirements. The main threat is bushfire, which could quickly destroy the three main sites as they occur near to each other. Remaining areas of hostplant are now severely fragmented.

Its hostplant needs to be reintroduced to all conserved areas in which it originally occurred. Additional areas may need to be conserved and repopulated with hostplant, as suitable native open forest habitat, uncongested by other understorey plants, particularly bracken, is now rare. The hostplant is a good candidate for growing in urban gardens in the Lower Southeast, as it is tough, easily grown and looks good. Use of the plant in the urban and roadside environment in the eastern states has shown a large increase in the T. symmomus butterfly population. (The local hostplant should be used, as the plant presently sold in nurseries originates from Melbourne and has a much broader leaf, and is silvery coloured rather than glossy green.) 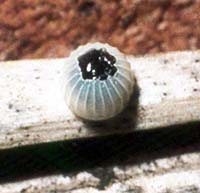 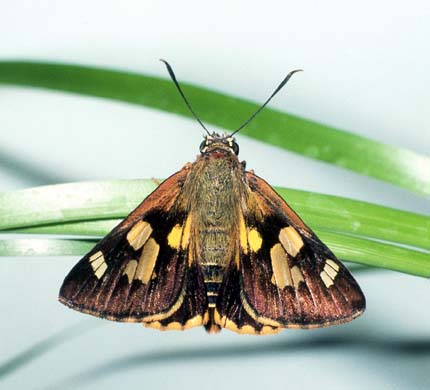 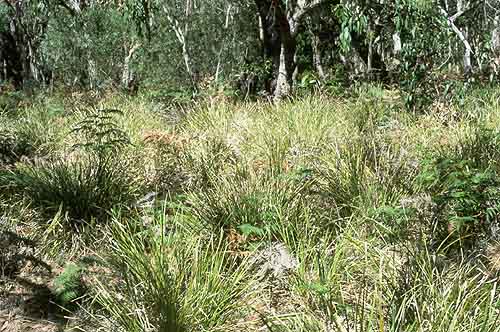 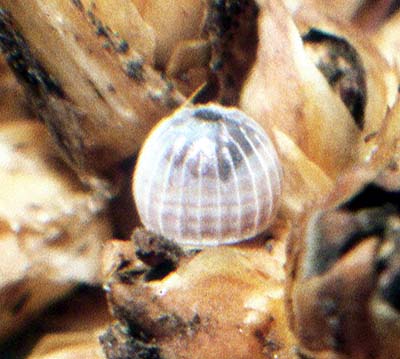 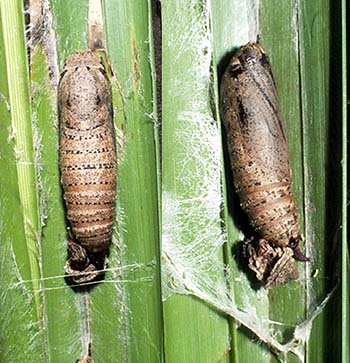