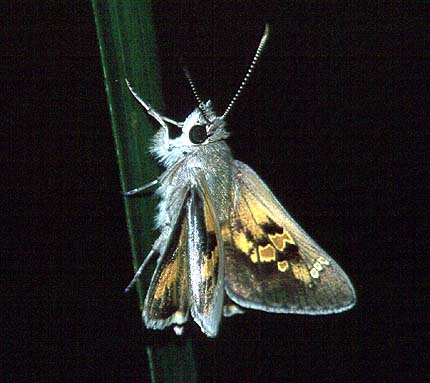 Like Geitoneura acantha, this skipper is a relict from probably the end of the last ice-age when the southern areas of South Australia were cooler and received a much higher rainfall.

Males gather on hilltops or along ridges in the Adelaide Hills where they wait for females to turn up for mating. There are continuous aerial battles between males jockeying for good positions along pathways, on rocks or fallen dead branches etc. Sometimes the males fly slowly about 30 cm above host foliage or other low plants looking for newly emerged females. The latter spend their time looking for their hostplants to lay eggs, or to fend off over exuberant males. Early in the morning and in the late afternoon both spend their time feeding from flowers.

Lomandra densiflora (soft-tussock mat-rush), L. fibrata (Mount Lofty mat-rush), L. filiformis, L. multiflora dura (hard mat-rush), L. nana (small mat-rush), L. sororia (sword mat-rush) (Asparagaceae). It has a particular liking for L. nana. The skipper uses Lomandra filiformis in the eastern states.This potential hostplant along with Lomandra longifolia only occurs in the Lower Southeast Region of South Australia. Neither of these potential hostplants are known to be utilised in South Australia, although in captivity larvae will transfer to L. longifolia. The skipper may also locally utilise other Lomanda species in South Australia as the butterfly has historically been recorded from Tintinara (Upper Southeast Region) in which locality none of the documented hostplants are presently known to occur. The larvae feed on the leaves.

Large, initially pale yellow, hemi-spherical (domal) with strong vertical ribs 18-25, laid singly on the hostplant. If the egg is fertile, then after a couple of days it acquires a large red dorsal spot, (with no extra red band). Eggs are usually laid on hostplant situated in partial shade.

Fat, about 28 mm long, having a shape typical for the genus.

Brown, with darker markings, 19-21 mm long, short and fat, with minimal ornamentation about the head, abdomen bristly, and the cremaster is very long and spinose. The pupa is typical for the genus. Pupation takes place during spring, either in the final larval shelter or the larva may leave the hostplant and pupate in leaf or bark debris around the base of the hostplant.

Late September to early December, usually flying later in elevated areas. Only one brood a year.

Presently confined to a small group of elevated areas about the summit of Mount Lofty. It has historically been recorded from Tintinara in the Upper Southeast Region, in which area it is now probably extinct. Likely habitat at that location was probably the pink and blue gum open woodlands with a low heath and Lomandra understorey, which has now been cleared for agriculture. Interestingly, it has not been recorded from other areas in the Southeast Region, even though its hostplant occurs, although there is a possibility the skipper may be found in that region in the future within some of the conserved heathlands. The skipper is also found in the higher rainfall areas of Victoria, New South Wales, and southern Queensland, mostly along the Great Dividing Range.

The skipper presently occurs in open woodland and forest, in high rainfall areas. It prefers its hostplant to be in partial shade and uncongested by other plants. The skipper, particularly the males, also has a strong preference for ridges and hill-tops, and the presence of hilly or dune areas may be a habitat pre-requisite. The early stages of the skipper may also require humid conditions, or at least require its hostplant to remain in a soft pristine condition during the hot summer and autumn months.

Vulnerable. Common in the eastern states.

Remaining native bushland habitat in the Adelaide Hills, particularly that occurring on hill-tops, needs to be conserved. As favourable habitat for the skipper occurs elsewhere in the Southern Mt Lofty Range, it is possible the skipper's historical range was much more extensive than is presently documented, with the combined effects of agriculture, urbanisation and bushfires causing its demise.Therefore, consideration should be given to repopulation programs for the skipper, into high rainfall elevated conservation areas within the Southern Mt Lofty Range. 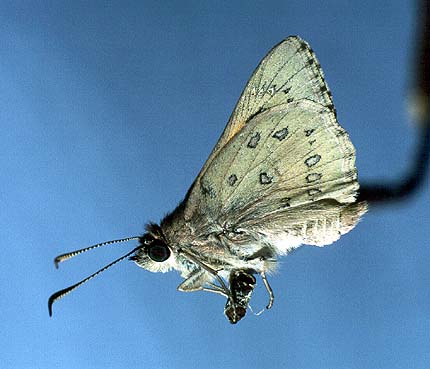