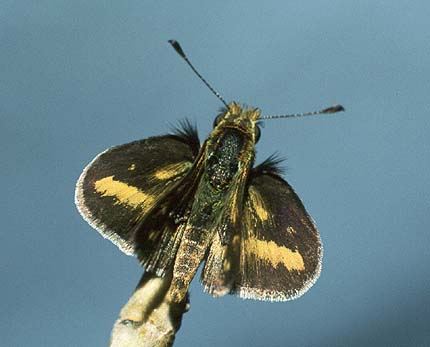 This skipper belongs to a group of skippers (Hesperiinae) that are more at home in the hot tropics and subtropics. Along with Ocybadistes walkeri, it has adapted to cold temperate areas of Australia and Tasmania, and is the most cold tolerant member of the group in the Australian Region. The skipper, along with most others in the group, has a characteristic wing pose when settled in full sun, with the forewings being held vertical (or nearly so) while the hindwings are held horizontal.

The skipper flies in grassy areas just above the tops of the grass, and has a very rapid flight. Both sexes are fond of feeding from small herby flowers. Males will set up small territories in grassy habitat where they will wait with the characteristic open wing pose, but periodically will fly off to either check out nearby grassy areas looking for new females with which to mate, or to chase off other males. Females also fly in grassy areas, and have a slower flight when in an egg laying mode, and will periodically land on the grass to lay eggs or sun themselves, and will cover large areas looking for suitable grassy habitat to lay eggs. The skipper is easily approached with care when settled, but once in full flight they are very quickly lost to sight due to their very small size.

Large, domal or hemispherical shaped, base flat circular, pale yellow when newly laid, but after 2 days if fertile the eggs acquire a ragged pale orange-red lateral ring and a similarly coloured micropylar area. Eggs turn white near hatching. The small micropylar area on top of the egg is depressed, the upper part of the egg surface has a very fine indistinct raised polygonal pattern, while the lower part has indistinct, very fine vertical ridges. The base is rimmed. Laid singly on the leaves of the hostplant. Eggs start to hatch after 8 days in late summer. The egg shell is eaten by the larva after its emergence.

The first instar is long cylindrical, initially pale yellow, but turning green after eating the hostplant. The head is rounded, large, shining black having a few hairs, and the neck (prothoracic plate) is black. There are a few short hairs along the body and long recurved hairs occur posteriorly. After eating the empty eggshell the larva will eat a small portion of the hostplant to test that it is the correct hostplant, then it will move to near the tips of the leaves to form a small tubular shelter, which (if it is a broad leaved grass) it does by folding over a portion of the leaf and joining the edges together by distinct cross strands of silk causing a zebra-like stitch pattern. (When the larva joins the two leaf edges together with silk, the silk shrinks on drying and gradually the two edges are drawn together, although with this skipper there is always a slight gap between the two edges.) The young larva eats the edges of the leaf between the end of the shelter and the leaf tip, leaving behind the central main vein of the leaf. In interstate areas the larvae have also been reported on wiry leaved grasses and in this situation the larvae join several leaves together to make a shelter.

It flies mainly during the warmer months, from mid September to early May. There are continuous broods over the warmer months, which can be completed within 7 weeks in summer. It normally overwinters as larvae, but sometimes the larvae will pupate to produce the odd flying adults in winter, particularly in warmer areas. Eggs laid in autumn either produce larvae that rapidly mature into pupae and adults that fly in late autumn and early winter, or they may produce larvae that slowly develop over winter to produce adults that fly in spring.

In South Australia the skipper is found in the eastern temperate parts of the agricultural belt, and tends to be more common in the cool Lower Southeast Region. It has yet to be found on Eyre Peninsula, Kangaroo Island or southern Yorke Peninsula. It may have a wider distribution than presently known as the skipper is very small (smaller than a bee) and is easily overlooked. The nominotypical local subspecies also occurs in similar habitat in Victoria, Tasmania, NSW, ACT, Qld and also Lord Howe Island. A very different subspecies of the skipper occurs in southwest Western Australia.

The skipper is found in areas where its grass hostplants remain in a soft green condition throughout the year. It is often found along open damp grassy creek courses, and in irrigation areas. It is fond of swampy areas, particularly in open green grassy verges next to the wetlands. It is sometimes seen in urban areas where lawn grass occurs in a rank condition.

Although broadly distributed, it is only seen sporadically and usually occurs in very low numbers at any one location, and on that basis is considered to be rare.

In the natural environment the main threats are drought and the effects of agricultural disturbances. In the urban environment, well manicured lawns and gardens will keep skipper numbers down, as will the use of toxic sprays and herbicides, especially in irrigated areas. 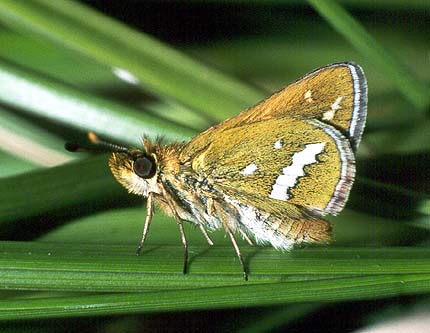