This skipper normally occurs in the hot tropical and subtropical coastal rainforests and moist woodlands of Queensland and NSW. In recent years it has extended its range to the major southern cities of Australia, and also westward to Darwin (1991) and some tropical coastal areas of Western Australia, being accidentally introduced to those areas as immature stages on ornamental palms being propagated by nurseries in Qld and northern NSW. The skipper was first reported from Perth in 1977, in Adelaide in 1988 and Melbourne in 1990. It could have been present even earlier in Adelaide during the setting up of the large nurseries specialising in palms.

Males can look similar to their close relative Cephrenes trichopepla but are easily differentiated in the field in that the hindwing underside postmedian yellow band is clearly edged black in C. trichopepla, but this edging is either absent or diffuse in C. augiades. If the wings are open then in C. trichopepla the postmedian band on the forewing upperside is yellow coloured and spills over towards the terminal wing edge along the veins, but in C. augiades this band is orange and spillover does not occur.

The skippers usually fly near palm trees, with the males sometimes setting up territories on the palms, or higher still in adjacent trees, or sometimes even on nearby low bushes in full sun, where they will wait with the characteristic open wing pose, but periodically will fly off to either check out other nearby palms looking for new females with which to mate, or to chase off other males. Males have a very fast flight, and even though they are large, they are soon lost to sight. Females tend to have a slower flight especially when in an egg laying mode, and will periodically land on a palm to lay eggs or sun themselves. They will cover large areas looking for suitable palms to lay eggs. The skipper is easily approached with care when settled.

Most species of palms (Arecaceae), but the adult female prefers to lay eggs on the palms with broad-leaf pinnae like **Archontophoenix spp (bangalow palm), **Livistona spp (cabbage tree palms), and *Phoenix spp (date palms). The larvae eat the leaves of the foodplant.

Large, domal or hemispherical shaped, base flat circular, pale yellow when newly laid, but after 2 days if fertile the eggs acquire a narrow pinkish red lateral band and a similarly coloured micropylar area. Eggs turn white and pink near hatching. The small micropylar area on top of the egg is depressed, the upper part of the egg surface has a very fine indistinct raised polygonal pattern, while the lower part has indistinct, very fine vertical ridges. The base is rimmed. Laid singly either above or beneath the leaf pinnae situated on the outer parts of the palm frond, although more than one egg may occur on the pinnae due to successive laying. The egg shell is eaten by the larva after its emergence.

The first instar is long cylindrical, hairy at posterior end, initially pale yellow, but turning a semi-translucent greenish colour after eating the foodplant. The head is rounded, large, shining black, having a few hairs, and the neck (prothoracic plate) is black. There are a few short hairs along the body and long recurved hairs occur posteriorly. After eating the empty eggshell the larva will move to near the tips of the leaves to form an open ended shelter, which it does by either folding over a tip portion of a single leaf pinnae to make a small tubular shelter (by joining the edges together by distinct cross strands of silk causing a zebra-like stitch pattern), or more often it will silk two leaves together on top of each other to make a flat shelter.

Subsequent immature instars are semi-translucent pale green or greenish white coloured, with a green dorsal haemorrhagic line, the prothoracic plate is transparent, and the anal segment has white hairs. Sometimes the second instar in a torpid state will be pinkish brown coloured with the posterior end remaining pale yellow. The head becomes finely rugose by the third instar, and by the fourth instar, the head, although still dark, acquires the head pattern described for the final instar larva. The shelters become progressively larger, which are either made by folding over individual pinnae to make a tubular shelter or by silking two leaves together on top of each other to make a flat shelter. They are silked strongly together by individual strands of silk. The larvae feed at night and rest inside the shelters during the day, usually with their heads pointing towards the tip of the pinnae. They eat the edges of the pinnae, and where the skipper is prolific have the potential to skeletonise the palm fronds.

The final instar is 40-50 mm, long cylindrical shaped, with the last posterior segment flattened into the anal plate, smooth, but with the posterior end having some hairs, semi-translucent pale green or greenish white coloured, with a darker longitudinal dorsal line, and the posterior end is yellowish. The head is large, rounded, slightly rugose, white or pale yellow coloured, marked with dark brown lines. The latter have two extreme forms, consisting of either two narrow dark-brown frontal lines coming together dorsally to form a triangle shape and with a narrow dark-brown lateral line circling the head, or the markings can be much reduced with just two short frontal dashes and no lateral line. There are intermediaries between the two. The body and head are covered in abundant tiny secondary setae that are transparent, short, simple and ending in a sharp point, set on a simple smooth raised base.

The presence of larvae on a frond is discernible by large jagged eat marks at the edges of the pinnae and by the webbed overlapping of pinnae to make the flat larval shelters. In Adelaide, larvae take five instars to mature during the hot months, but use six instars during winter.

Long cylindrical, about 25-30 mm long, semi-translucent pale green, or greenish or yellowish white, nearly smooth, heavily covered in a white powdery bloom, the latter acting as a water repellent and perhaps fungicide. Covered with short, stiff, white spinose bristles on the abdomen, dorsal parts of the thorax, and the head. The posterior end tapers to a very short, brown, rugose, V shaped, dorsal cremaster ridge and long attachment bristles, which the pupa uses to anchor itself to the silk cocoon. The head is rounded, with the head cap (operculum) being pale coloured and hairy. The ventral proboscis significantly extends posterior of the wing cases as a loose extension, a feature that typifies the members of the Hesperiinae subfamily.

Pupation usually occurs in the final larval shelter on the foodplant, but sometimes larvae will leave the foodplant to pupate, which is probably a good move if there are many larvae present on the palm frond. The final larval shelter is similar to the previous shelters, except that in this shelter the larva weaves a strong inner silken cocoon sealed off at one end, while the other end (the entrance and usually pointing towards the pinnae tip) is sealed off with silken cross threads before pupation. The sealed entrance helps to prevent predators from entering the shelter and also helps keep the pupa secure within the shelter during periods of strong winds. The silk sealing strands at the shelter entrance have to be broken by the emerging adult. The pupal duration is variable, even during the same time of the year. It can be 12-18 days during the hot months, and about 22-40 days during the cooler months of autumn, winter and spring. The empty pupal case remains inside the shelter after the adult skipper emerges, and is white coloured.

This skipper is only rarely seen in flight in Adelaide and so flight records are very few, but these records indicate it to be most active during the warmer months, from September to May. It normally overwinters as larvae, but as the skipper has not fully acclimatised to Adelaide conditions the larvae will sometimes pupate during winter to produce the odd flying (shortlived) adults in winter. The skipper flies all year round in northern tropical areas.

In South Australia the skipper has so far only been found in suburban Adelaide, usually on the plains in warm sheltered areas, but has been recorded from Blackwood and Coromandel Valley (240 m) in the Adelaide Hills. The main population was originally centred within the Adelaide Botanical Gardens where during the early years of its introduction the skipper became well established in the warm, humid microclimate of the newly constructed (1988) Tropical Rainforest Conservatory . Since then, the adjacent Zoological gardens have been profusely planted out with palms, which have been opportunistically colonised by the skipper. The same subspecies occurs in other parts of Australia.Numerous other subspecies of the skipper occur outside of Australia in the northern tropical areas of the Australian Faunal Region.

Native palms do not occur naturally in South Australia.There have been several attempts to grow date palms in the Flinders Ranges, and the Far North Region particularly at Dalhousie (1896), and ornamental palms are grown in major towns in the Far North at Marla and Oodnadatta, and it is possible that this skipper may accidentally be introduced to these palms in the future. However, the skipper was not seen at any of these localities during recent surveys (2001-2004).More recently there has been a program to eradicate the palms from the Dalhousie area. Interestingly, this skipper is yet to be recorded from the Alice Springs area where the closely related Cephrenes trichopepla already occurs. Recently (2004) a date palm plantation has been established at Loxton in the Riverland.

The skipper is only found where palms are growing in a high enough density. It requires warm sheltered conditions for survival, and prefers a moist microclimate within other tall vegetation.

The skipper is presently rarely seen, and is likely to stay that way, as suitable habitat is very limited. It is essentially a localized urban skipper in Adelaide.

The larvae have the potential to tatter palm leaves and gardeners are therefore likely to treat the skipper as a pest, although the damage would be minimal as skipper numbers are very low (except in the Tropical Conservatory and Zoological Gardens) due to the unfavourable climate for the skipper in Adelaide. 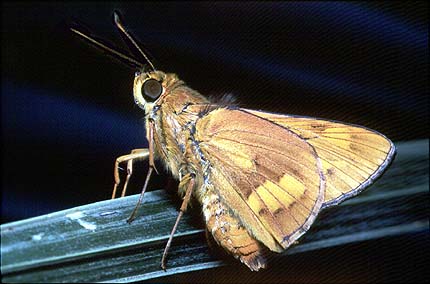