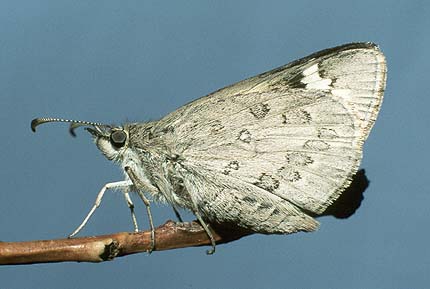 This skipper belongs in a small tribal group of skippers that have characteristics similar to both the much larger Australian tribal groups of the Trapezitini and Hesperillini. The larvae of this small group usually construct shelters with a single opening at the bottom and within which the larva rests with its head pointing downwards.

It is a dull skipper, and flies near the ground close to its hostplants, and unless startled has a reasonably slow flight. Both sexes spend a lot of time feeding from small flowers. Males will settle on the ground, and will set up territories on bare patches of ground or sand within or near the hostplants, or sometimes on adjacent tracks, and wait for newly emerged females to fly into the area for mating. They will also collect on adjacent dune-tops or 'cliff-tops' to the hostplants from where they will periodically fly off to either patrol nearby areas looking for new females, or to chase off other males. They are very well camouflaged when settled on the ground if there is also some old leaf debris present. Their pale grey coloured undersides also generally matches the colour of the exposed limestone rocks where they fly, and this colour is paler than that which occurs on Hesperilla donnysa which has a similar underside pattern and which sometimes accompanies A. atralba in flight. Females also fly in hostplant areas, and have a slower flight when in an egg laying mode, particularly when they are heavy with new eggs, but will periodically land on the hostplant to lay eggs or sun themselves, and will cover large areas looking for suitable habitat to lay eggs. The skipper is reasonably timid, but can be approached with care when settled, especially when feeding at flowers.

Gahnia lanigera is a locally common dryland tussock-like sedge found growing in limestone based soils. It is low growing to about 30 cm and has tough, wiry, grass-like needle pointed leaves that have a most unappetising appearance. It is dark coloured, hence its common name. On Kangaroo Island there occurs Gahnia hystrix that looks like a dwarf G. lanigera and is even more unappetizing. It grows in limestone based cliff-top coastal-heath habitats where it is subjected to constant wind-shear creating a dense pin-cushion like growth. This plant, unique to Kangaroo Island, is locally used by the skipper.

Large 1.5 mm, pale green, hemi-ellipsoid, base flat, with numerous very indistinct vertical ribs, numbering about 40-50, and laid singly on the hostplant. The eggs do not acquire red markings if fertile. The small micropylar area on top of the egg is depressed. Eggs are usually laid on hostplants situated in full sun. Females of each population have a preference for egg laying on either living, green leaves, or dead, black leaves. Larva development within the egg commences immediately after being laid, and larvae begin to emerge after about 15 days in late spring. The egg shell is eaten by the larva after its emergence.

The first instar is long cylindrical, initially pale greenish yellow but gradually turning green after eating the hostplant, with five longitudinal brown coloured dorsal and subdorsal lines, and with a large shining black slightly rugose head having a few long hairs, the neck (prothoracic plate) is black, and long recurved hairs occur posteriorly. After eating the egg shell, the young larva moves off to the outer parts of the hostplant and makes a small tent-like shelter opening at the bottom, by silking together the tips of several leaves of the hostplant. The young larva rests in the shelter during the day with its head pointing downwards towards the leaf base. It eats at night by feeding on the tips of the leaves.

Subsequent instars gradually acquire a whitish edging to the brown longitudinal lines and lose the long posterior hairs, the head gradually becomes paler and acquires pale brown and black frontal markings, and eventually by about the fourth instar acquires the head pattern described for the final (fifth) instar larva. New shelters are periodically constructed to fit the growing larvae (each larva makes two or three in its lifetime), using the leaves of the hostplant, and the internal diameter of the shelters is approximately the diameter of the larvae. The shelters are constructed in the outer parts of the hostplant and are teepee tent-like, elongate conical, and always open at the bottom and are tightly sealed at the top, which typifies this tribe of skippers. These shelters are elaborate, using many leaves, which are usually silked together in a twisted manner, and are very strongly lined with silk. Larvae continue to rest and hide from predators within the shelters during the day with their heads directed downwards, and emerge to eat briefly at night eating leaves from anywhere on the plant. They grow slowly, and pupation occurs in the final shelter.

The presence of larvae on the principal hostplants is discernible by the characteristic, elongated tent-like shelters opening at the bottom, that occur in the outer parts of the plants. There is usually only one shelter on a single hostplant. This characteristic shelter can be used during field surveys to differentiate A. atralba from Hesperilla species that may also be using the same Gahnia hostplants, particularly in the case of Gahnia ancistrophylla and G. deusta. The shelters of Hesperilla species open at the top.

Gahnia hystrix, having a dense, pin cushion like growth presents an unusual set of needs for the larvae. In this instance, the larvae utilise any gap in the structure of the pin-cushion to make their shelters, but fully grown larvae require almost the entire depth of the plant, such that the shelter opening occurs at the bottom edge of the pin cushion, and the larvae then have to make their way around to the edge or top of the plant to feed at night.

Short cylindrical, about 16-23 mm long, dark brown or dark brown and green with the abdominal area being green, nearly smooth without abdominal bristles. The posterior end tapers to a short, narrow, bluntly ended, dark brown cremaster. The head is rounded, with the head cap (operculum) being black and brown coloured, having a characteristic rounded shape, and there are some short hairs. The central part of the operculum is black coloured, heavily sclerotised (very rugose) and is divided into a larger ventral part (which is sometimes further divided into two lateral parts), and two smaller equal-sized dorsal parts. The relative size of these segments varies from region to region. There are further, smaller less sclerotised brown coloured areas lateral to the central part.

Pupation normally occurs in the final larval shelter on the hostplant, and the larva pupates head downwards towards the leaf base. The pupa is secured within the silk lined shelter by very strong hooked bristles emanating from the end of the cremaster. During pupation a large blob of black liquid is left on the operculum or in the entrance of the shelter, and the reason for this is not known, but the liquid could be a deterrent to small predators while the pupa is still soft. The pupa duration is about 24-36 days in spring, decreasing as the weather gets warmer. The empty pupa case remains inside the shelter after the adult skipper emerges, and is either brown or dark brown coloured. The emergence of the adult skipper from the pupa is aided by rain or heavy overnight dew, and in some instances unless the pupa gets wetted near this point in time the skipper will emerge deformed.

The skipper has spring and autumn flights based on two distinct broods that each usually last one year, i.e. eggs laid in spring or autumn will respectively produce an adult flight during the following spring or autumn, for brood periods of 12 months. However, the gene pool continues to mix, as in captivity it is known that during good summer seasons some of the spring larvae may develop quicker to produce adults during the autumn flight. Adults start to emerge earlier in the spring on the West Coast than for southern areas. The skipper overwinters as larvae.

The skipper usually occurs wherever its principal hostplants grow in adequate density, and that includes most of the southern agricultural belt, and also Kangaroo Island. It is also known to occur in mallee habitat in adjacent areas of Victoria. A morphologically very similar skipper Antipodia dactyliota, presently treated as a distinct species, occurs in southwest WA.

The skipper will occur wherever its principal hostplants are growing, which includes limestone based open mallee or coastal cliff-heath habitat for Gahnia lanigera (and this habitat is also used by the minor hostplants G. deusta and G. hystrix), and higher rainfall sand-based moist open woodland habitat for Gahnia ancistrophylla. The skipper is still maintaining a precarious presence along the coastal cliff-heaths south of Adelaide, and at one historical point in time these areas were the only localities known in South Australia where the skipper could be found.

The skipper is widespread in distribution but is rarely seen in flight, and on that basis is considered to be rare. However, its early stages are more frequently seen, and are often the only means to determine the skippers' presence in an area. It is maintaining a stable presence in the large mallee dominated conservation parks.

The main threats are from bushfires, and the effects of agricultural and urban disturbances. Much of its habitat is now fragmented and the skipper has been unable to recolonise many of these areas after bushfires or degradation. These small fragmented areas also make colonies vulnerable to attack from wasp parasitoids, diseases and virus, and it is often this group of predators that terminate such remaining colonies weakened by inbreeding. Populations near large urban areas are in a steady decline. Habitat adjacent to farming areas is susceptible to toxic spray drift, especially when it is applied by aerial means.

Remaining areas of remnant coastal cliff-heath habitat, particularly along the exposed cliff edges south of Adelaide need to be conserved (such as Port Stanvac), and its G. lanigera hostplants included in revegetation projects in these areas. However, it may be too late to stabilise these populations as they now appear to be in irreversible decline. 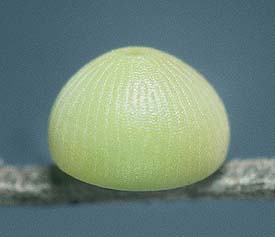 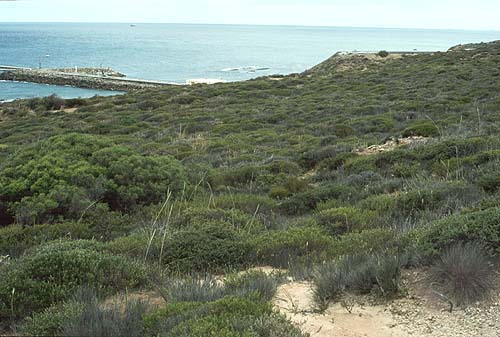 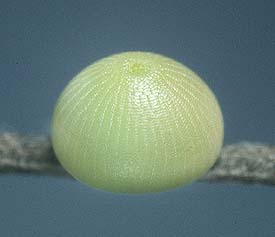 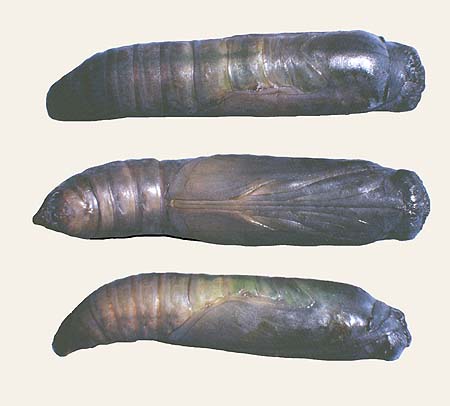